Fly sheets are sure handy when used around the barns and corrals. I found them especially handy when doctoring a body wound on a horse during fly season. Several years ago a stud had gotten to a gelding at my place and had put some horrendous wounds on the upper curve of his hind quarters. They were deep and would take months to heal. Flies were a huge problem as the wound couldn’t have fly spray in it and had to be left open to heal from within and drain. I bought a fly sheet and confidently put it on Dizzy to aid in fly control. I sprayed his legs and belly and thought I had the problem solved. In a few days, when I took the sheet off to doctor him the smell and the visual revealed that maggots had infested the wound. The fly sheet was by appearances keeping the flies off the wound, but obviously, they’d managed to lay eggs through the mesh.
Cleaning the maggots out of the wound was no picnic, so I had to find some way to keep it from happening again. Keeping the mesh off the surface of a wound that can’t be bandaged was the challenge. I thought about what I could use to put a gap between his upper hind quarters and the fly net. It had to be something that wasn’t heavy enough to be abrasive to the wound, plus had to have a washable surface.
Walking by the hydrant I had an epiphany! Foam pipe insulators! The local hardware store had the size big enough for the job, which was the size used on a riser for a hydrant, so at least one inch interior measurement. I marked the fly sheet and then took the sheet off of Dizzy in the barn where the flies were kept at bay with spray. I sewed the foam tubes to the inside of the fly sheet where it would hold it off of the wound. I used heavy button thread for the job so they’d stay in place in spite of rolling and rubbing. 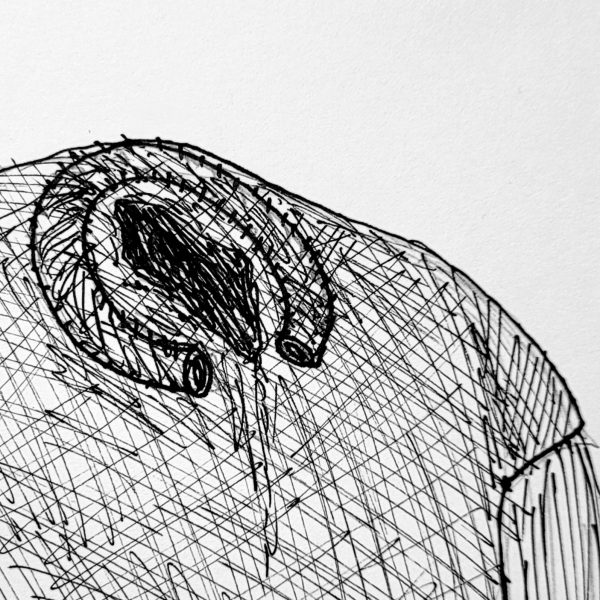 When put back on Dizzy it sure enough worked. I monitored the wound daily for maggots and never had another problem. The tubes under the netting stayed firmly in place and didn’t cause any abrasion to the wound, plus could be wiped clean and disinfected daily. It also prevented the fly sheet from rubbing against the uneven surface of the wound or sticking to the drainage.
By fall the frost had killed the flies and Dizzy was virtually healed up without another episode of nasty maggots in the wound. I think the tubes could be adapted to protect wounds in other locations as well.