Worth His Weight in Gold;Kind-hearted Pony Starts Sisters in the Trick Riding

The most unlikely candidate became a trick riding horse for three young sisters. 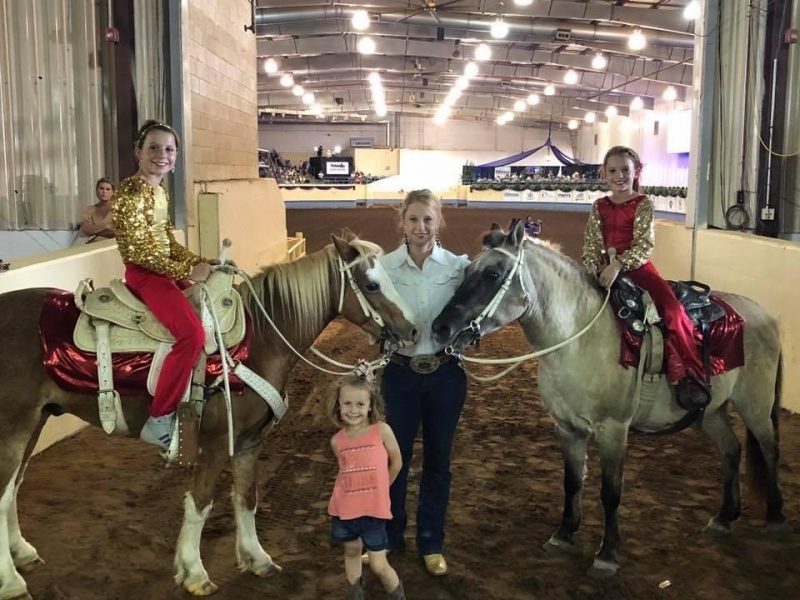 Max (on the left, with Shyla) and Thunder (on the right, with Layna), pose with Melissa Navarre, the girls’ mom, and the youngest Navarre girl, Clara. Photo courtesy Melissa Navarre.

But Thunder, who came to the Navarres of Weatherford, Okla., was never intended as a trick riding horse.

Clark Dees, a friend of Corey and Melissa’s, who lived in Louisiana, owned the grulla pony, and was going to be out of state for work for a few months. So he asked the Navarres if they’d care for him. They said yes, and Thunder came to Oklahoma.

At the time, the girls were little, and their mom, a trick rider, wasn’t thinking too much of trick riding for them. But Thunder was the right size, so they began riding him.

And when Shyla was five years old, he was the obvious choice for her trick riding mount. 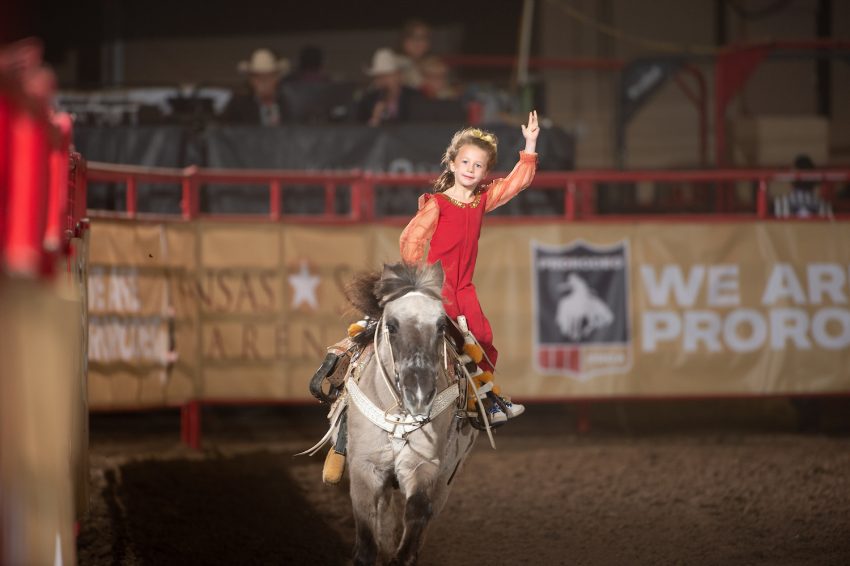 “The little horse never offered to be naughty, to buck, he never did anything,” Melissa said.

Melissa was Roman riding at the time, and took Shyla with her to pro rodeos, where Shyla also trick rode on Thunder.

The little horse took right to it, Melissa said. “I have seen so many ponies be naughty in the arena and run off or not run. He always did exactly what we asked him to. And I always felt safe with the girls being on him.”

In 2013, Melissa trick rode at the Wrangler National Finals Rodeo, and Shyla, who was seven at the time, did, as well, on Thunder. (They are the only trick riding mother/daughter duo to work the National Finals.)

“We never thought twice about it,” Melissa said, referring to taking the pony to such a big rodeo.

He did well with the rodeo atmosphere from the start.

By this time, Clark called his friends, wondering about the pony.

“We told him, we really like him and you can’t have him back,” Melissa laughed. Clark didn’t mind.

Clark couldn’t tell Corey and Melissa the pony’s age. About five years ago, Melissa had the veterinarian mouth him. He said the pony was between 25 and 30 years old. 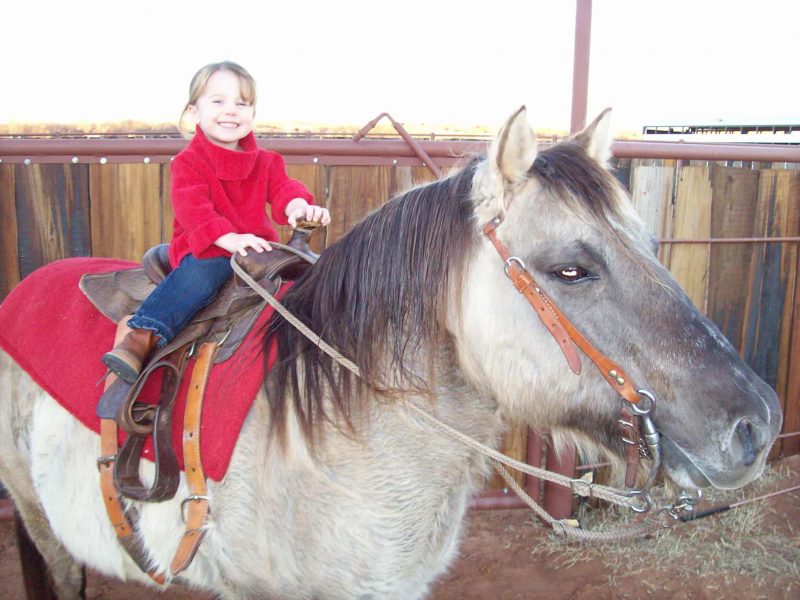 The girls had a second pony they trick rode on, named Max, who was inseparable from Thunder. The two were friends.

Thunder’s story took a twist in October of 2020. When Melissa went out to feed him, she found him lying down and in pain. She called her veterinarian, who is in Edmond, Okla., ninety minutes away.

The girls and their mom loaded Thunder and took him to Edmond, where the vet diagnosed him with colic.

“So he’s 25 years old and you’re asking yourself, what do I do?” Melissa said. The veterinarian staff didn’t recommend colic surgery, thinking he wouldn’t make it through it, and if he did, it would be a hard recovery. Plus, it cost $10,000.

After discussion, the family decided to do it. “We felt like we needed to save him.”

Veterinarians found a tumor wrapped around his small intestine and removed it and three feet of intestine.

Thunder’s vital signs during surgery weren’t good, and his recovery didn’t go well, either. Every day, the Navarre girls and their mom made the trip to Edmond to see him.

“It was the saddest thing,” Melissa remembers. “He would sit there and whinny at us but he wouldn’t eat.”

Then the thought of Max, his friend, came to mind. The vets were willing to have Max at the clinic, with Thunder, so Max came to stay at the vet clinic.

“You’d have thought it was his long-lost friend,” Melissa said. “Thunder was happy to see him and perked up,” and was able to come home.

Six weeks later, the Navarres got a call to compete on the big stage: the National Finals Breakaway Roping, held that year in Arlington, Texas, due to the pandemic.

It was a last minute notification, as the scheduled trick rider had tested positive for Covid.

Was Thunder ready to carry his small mounts again?

Melissa called her veterinarian, who suggested they ride him and see how he reacted.

So he made the trip to Arlington, “and actually outran Max,” she laughed.

He’s worth his weight in gold, for how well he takes care of his young riders.

“For a little girl like Clara, she’s trying to focus on what she’s doing and controlling her body. To be able to put something like Thunder underneath her, she doesn’t have to worry about her horse because he’s going to do exactly what he’s supposed to do.”

“We laugh,” Melissa said, “because we said he’s a free pony and you don’t get free ponies like that. Clark never asked us for a dime for him. Of course, we paid for the colic surgery, so he’s not free anymore, but he’s definitely worth it.

“He lives like a king. He gets everything he wants.”