Training and working a colt while horseback

Training a colt while riding another horse can benefit both animals and the cowboy by sharpening everyone’s skills. It helps desensitize a horse to ropes and the presence of a person above his back. It helps the saddle horse by making him more responsive to moving his hips and shoulders independently of each other as the cowboy maneuvers him into position alongside the colt. It also serves to keep a cowboy’s feet from getting muddy.

Little known fact: Cowboys don’t like to get their feet muddy.

Well-known fact: Because this means they stepped off their horse. And they don’t like doing that.

Here, my husband Jim is riding his big roan gelding, Snoopy, while working a younger horse. The gray horse is named Four.

I’m pretty sure it’s a number.

This colt needed a little bit of help to get him more gentle and safer to ride. He had some overly sensitize zones, including the one directly above his back where his saddle and, subsequently, Jim, sat. So, Jim spent an afternoon in the round pen training this colt and helping Four overcome some of his issues. 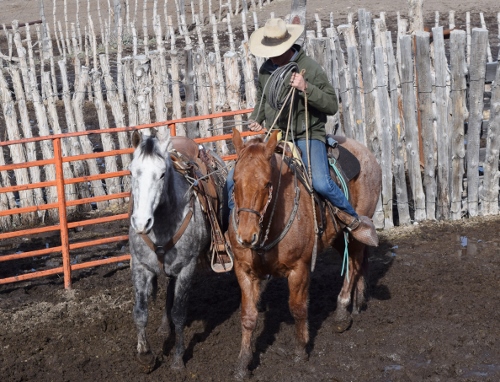 Jim roped Four, then worked the colt closer to him and Snoopy so he could pet him while leaning over his back. This simulates what will happen when Four is being ridden. 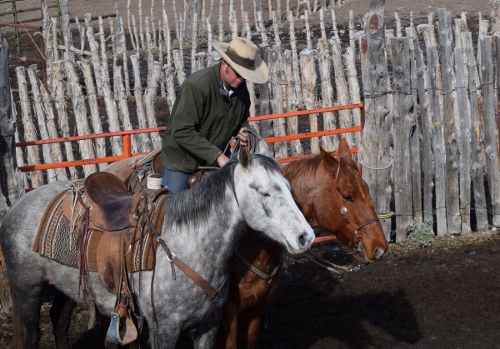 This also helped make Snoopy more responsive to moving his hips over to place Jim alongside Four.

Jim petted Four from his face to his flank until the horse was comfortable being touched all over his body by a person above him. 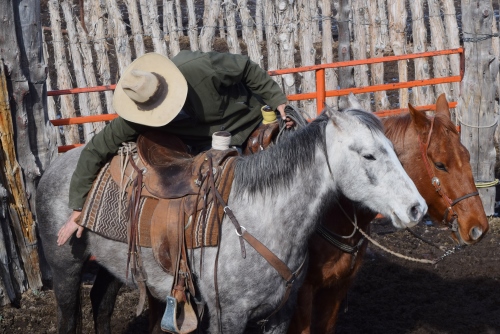 He then placed his cowboy hat on his saddle horn, just in case this scenario ever comes up in daily work. Most clinicians gloss over (or don’t even mention) the importance of getting your horse accustomed to a cowboy hat being placed on the saddle horn. Don’t make this mistake: make sure your horse is well-prepared. 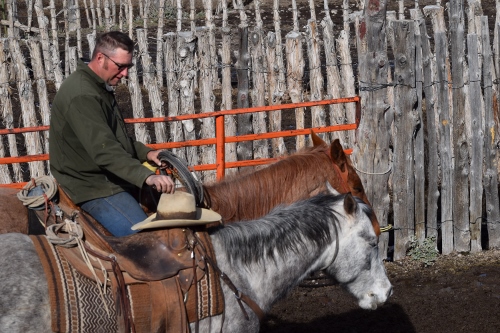 Our one-year-old son Milo peeked through the cedar stays to see what Daddy was doing in the round pen. Then he crawled underneath a barbed-wire gate and tried to pet the pack mules, causing his mother to screech, nearly drop her camera, and run over to retrieve him from the horse pasture. 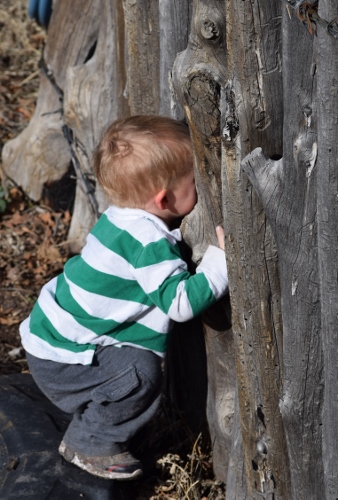 After Milo was properly re-situated playing near the barn, Jim worked on getting Four accustomed to a rope around his flank. Most horses, including Four, initially buck and try to kick off this new sensation.

But, that tactic doesn’t work, because the cowboy had hooked the top strand of his loop around the cantle of his saddle. 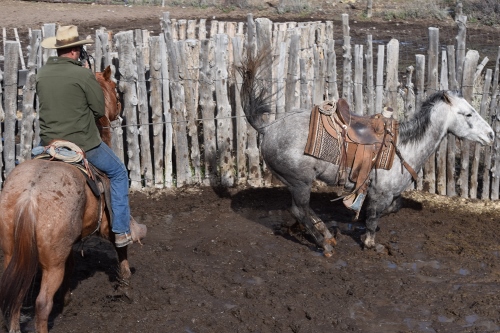 After hogging around the round pen for a couple laps, Four settled down and accepted the rope around his flank. 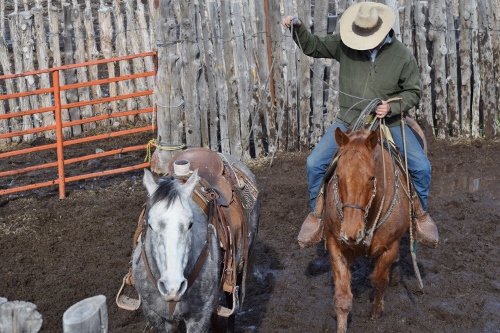 And Snoopy got to track him around, which is also good practice for a rope horse.

Then, Jim leaned over and gave Four a hug. 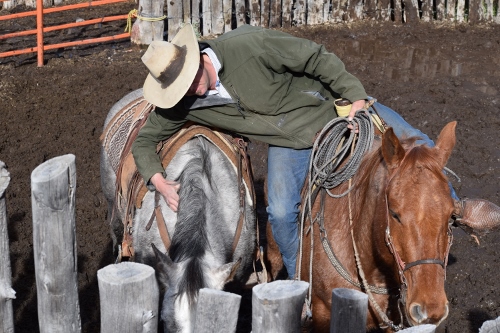 Because cowboys like their horses. And Four is a good sort, he just needed a little extra help. Check out some of our other posts on training a colt.

Let Them Be Light: Colt Starting

A Legacy of Legends: Colt Starting

The Colt Cam: Desensitizing with a Rope