It’s winter time in the Northern Hemisphere, and the weather is cold and snowy in central Nevada. My husband and I live on the RO Ranch, and he is taking care of a bunch of yearlings that are wintering at headquarters. I’m glad that he’s sticking around fairly close to the house, because I’m more likely to get to see him during the day. Most wives kiss their husbands good-bye in the morning and don’t see them again until evening, so I’m very grateful I get to say “Hi, honey, how’s it going?” to mine when he dashes into the kitchen occasionally for a coffee refill.

These cows sure look cold. I bet they wish they had some coffee. Or maybe a pair of thermals. 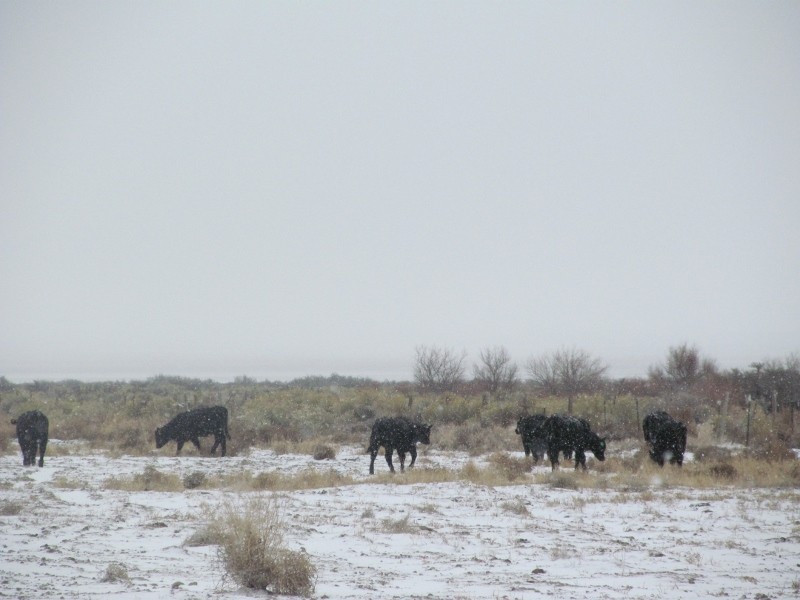 They’ll have to settle for a cowboy who breaks the ice on their water trough each morning so they can get a drink. Jim stopped by and picked up me and the kids the other morning, so we got to tag along and “help” with his ranch chores. Because a wife who takes pictures nonstop and a three-year-old are so much help.

Side note: it’s so fun to say “the kids” now! Since I last blogged for CavvySavvy, we added a baby boy to our family. Milo James stayed tucked warmly inside the pickup during our chore run, snoozing away in his little reindeer booties. 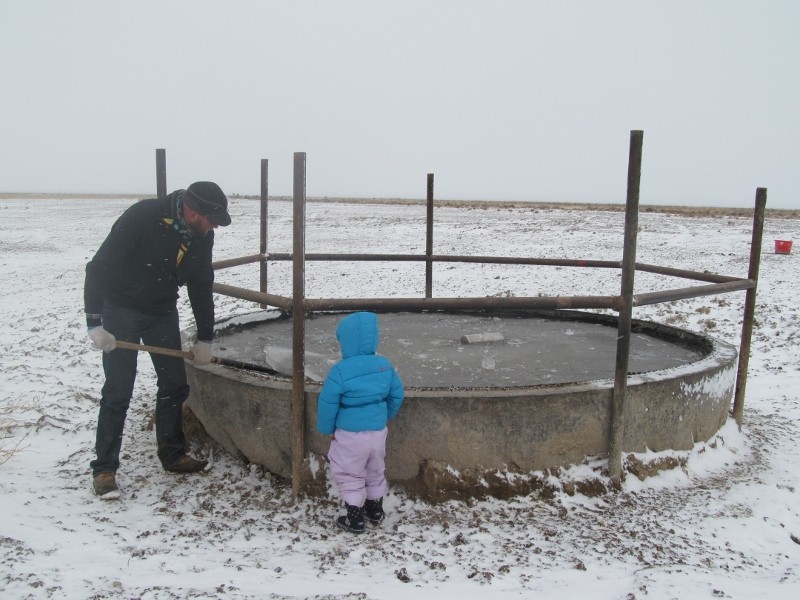 After we (Jim) broke ice, we headed to the stack yard to fix a stretch of fence that the yearlings had mucked out. Here they are, all lined up neatly and saying “Hey, guys, what’s up with those fencing pliers? Are you, uh, trying to keep us from getting to that nice alfalfa stack? That’s cold, man, that’s real cold.”

Okay, that’s not really what they said. Like yearlings are clever enough to come up with a pun! 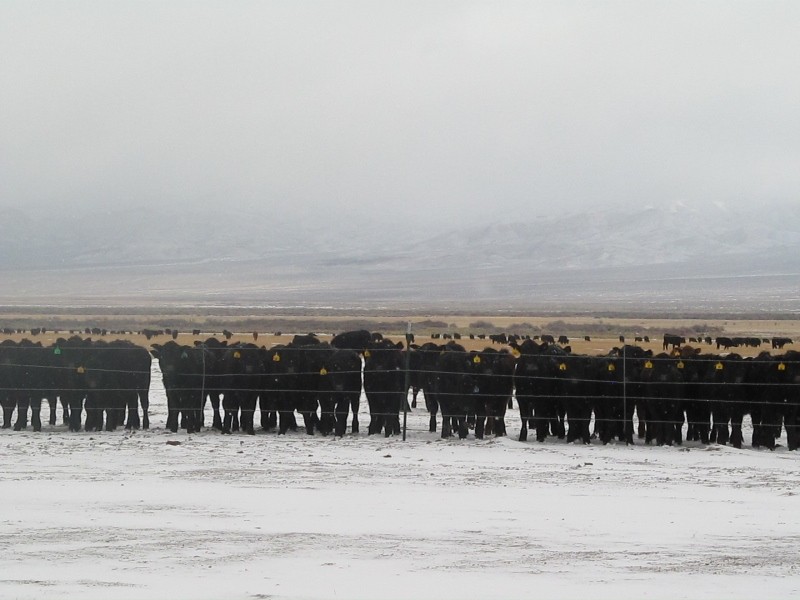 Yes, we are trying to keep you from that nice alfalfa stack. Because we are humans and in we are in charge of this outfit. And, we’d like to dole it out in properly measured rations rather than just allowing a bovine free-for-all. 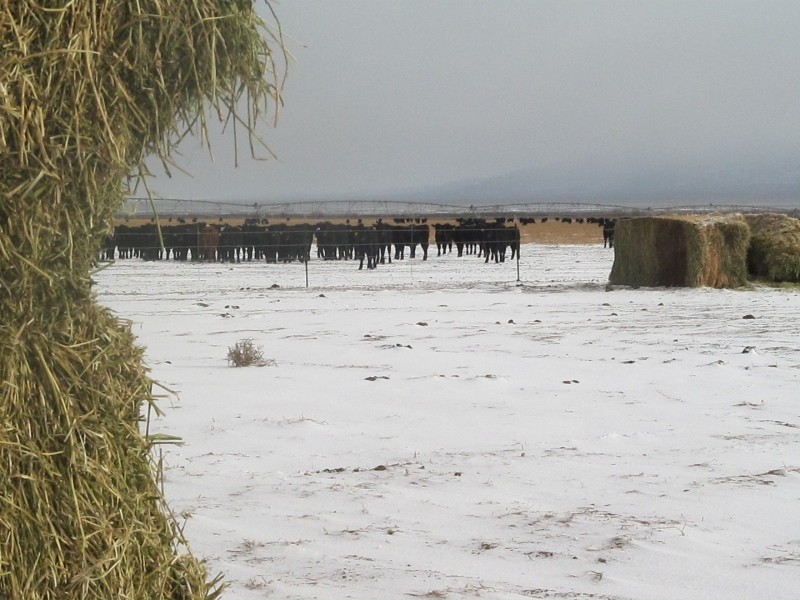 It’s a good thing we brought Grace along to stand on the other side of the fence from her daddy and look cute. That used to be my job, then I outsourced it so that I could take pictures of people doing actual work instead of simply watching people do actual work. 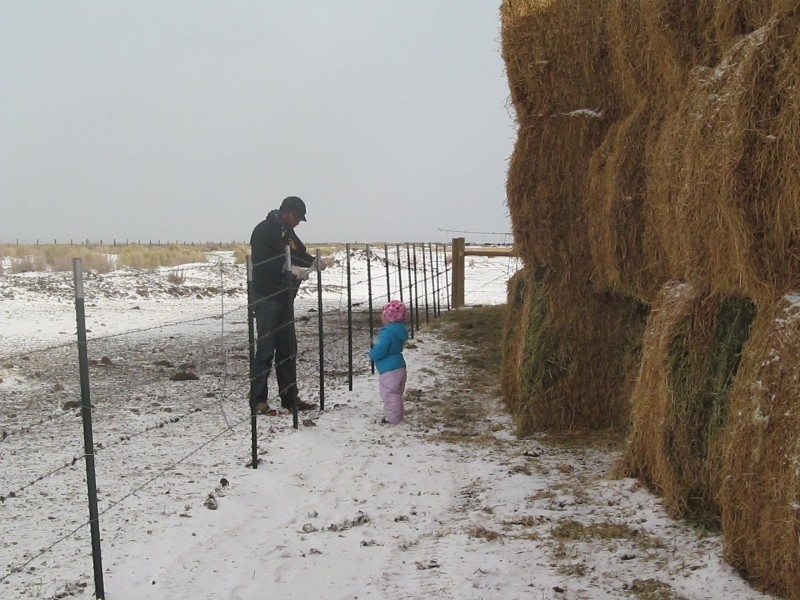 Fixin’ fence. It’s not as glamorous as roping calves or starting colts, but it’s a standard part of the modern-day cowboy’s job. Even a straight riding job like those at the RO still requires a tiny bit of fencing once in a while. 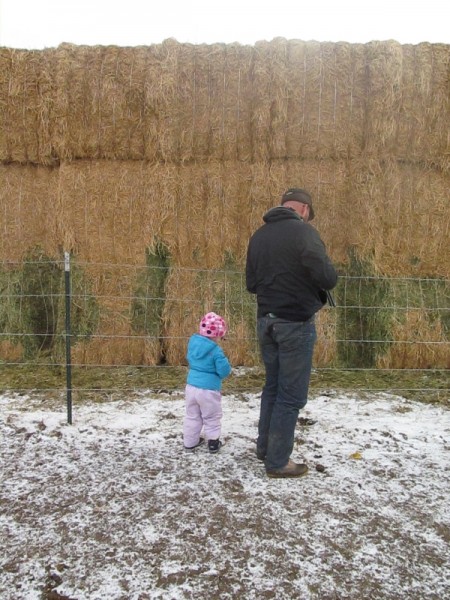 Here’s our girl, handing Daddy clips to repair the fence. She worked as long as she could… 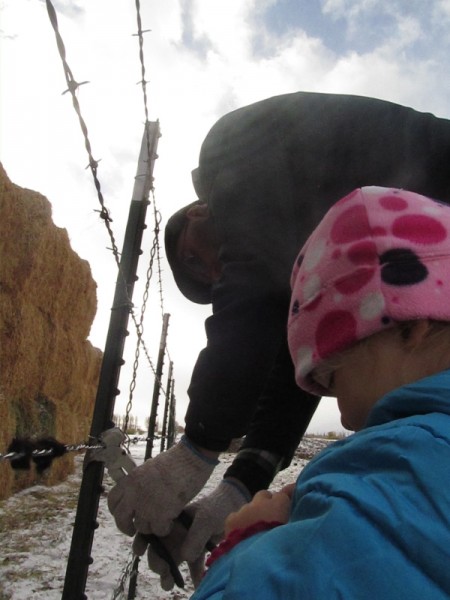 …until she froze out and ran for Mama. 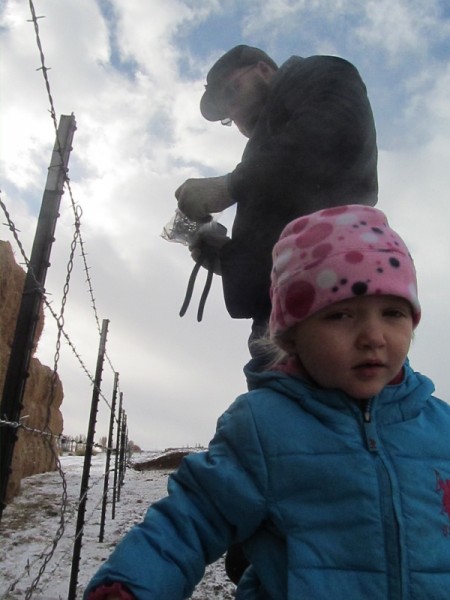 And then I hugged her for warmth, because I love her. Plus, I was cold, too.

And then I took some more pictures of Jim fixing fence. Did you know that taking multiple pictures of someone fixing a fence is super useful and really helps them get the job done more quickly?

Jim didn’t know that, either. It’s a good thing he married me. 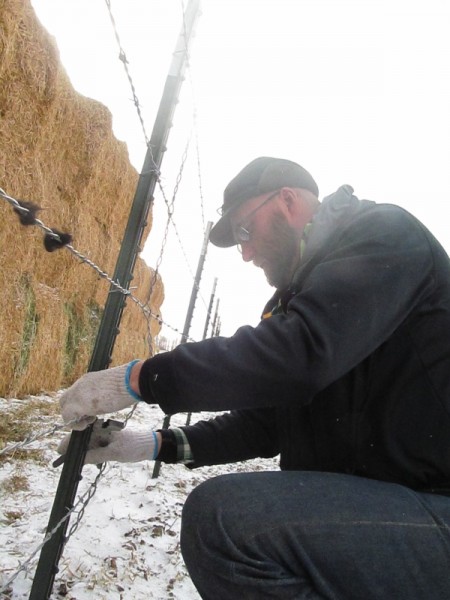 After we (Jim) did the morning chores in the pickup, he dropped us off at the house to warm up while he caught a horse and doctored some calves in the afternoon. After the ice-breaking and fence-fixing, he was happy to get a-horseback and do a little ridin’ and ropin’. It’s all part of the winter time reality on a cattle ranch.