It’s Not About Winning

This was said in regards to a rather touchy colt. He’s probably 60 rides in to his training, and he’s still prone to hog around, bog his head, buck and jump out from under you.

When asked what to do it about, I suggested going back to the basics: groundwork, flag work, maybe even a tarp (have the horse walk over it, rub him with it, etc), and some additional desensitizing*.

But the person riding the colt wasn’t game for that suggestion. “Naw, I don’t think that’s what he needs.”

Well then, rock on.

But, what is likely to happen with this colt is that he’ll learn to tolerate the things that bother him; and then one day, three years from now, he’s likely to come unglued some cool, fall, morning when we’re out gathering cattle to ship or vaccinate.  And the guy that started him may or may not be riding him at this time, but I can guarantee whoever’s on him won’t be ready for his come-apart then,  because, “everything will have been going so well.”

That’s the trouble with the win-some, lose-some mindset. I’d argue that anytime you get off your horse of your own volition, you’ve had a successful day. That’s not to say that where you left the horse on Monday when you ended, is where he’ll be on Wednesday when you get on. The horse is allowed to think for himself, have bad days, and is entitled to his opinion of how you present yourself to him. 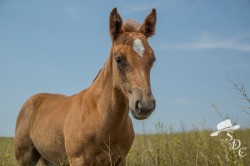 If you’re not there to support him, or you get upset when something bothers him, like the saddle going over his back, or a stirrup banging him in the side, it’s probably going to become an “issue.”  He may seem “okay” with it one day, and the next, freak out about it.  It’s our job to prepare him for what is to come in his life.  If we view each day as win or lose I’m not sure we can be the best for our colts or saddle horses.

It’s our job to take our horse from where he is THAT day – the moment we catch him – to help him, support him, and teach him to learn. To teach him that we’re not going to bail on him if something scares him, to teach him to try for us, through limitless patience, and never going farther than he’s ready to let us go.

Since we are halter-breaking foals on the ranch this week, I’m going to use halter-breaking as an example. The baby may present his back-end to you for you to rub (if he’s one that has never been touched, or imprinted), and that may be all you get the first day you handle him.  If you don’t force the issue, he’s going to be more likely to trust you. The next day, you might be able to touch him up his back, and get out before he feels the need to leave/move.

If you feel like you’ve “lost” because you set out to halter break your colt that day and all you managed to get done was rub him on the hiney, the fact that you didn’t get him haltered may become a bigger deal than it really is if you view the situation as a win/lose, instead of seeing that you rubbed on a previously un-touched colt and had him comfortable with you being in the pen with him.

So, the next time you handle your horse, ask yourself, “Do I view my riding/handling of my horse(s) as a ‘win-lose’, or am I working to take him from where he is today, and view that as success?”

*I do believe a horse can be too desensitized.