The dust and grime on my saddle finally got to me bad enough that I spent some time getting it cleaned up and put back in good condition a week or so ago. I had to strip all of the extra gear off of it before I could start, which included a rope, breast collar and tugs, two tie down strings, my hobbles and a boot top bag. I took the back cinch off the front cinch and unstrung the front cinch from the latigos. It sure looked different without all of it’s necessary add-ons. 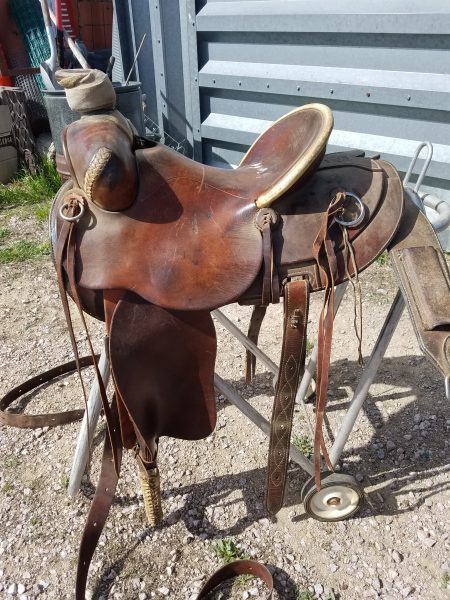 I scrubbed it thoroughly with a hand brush and oil soap, rinsed if off well, and let it dry in the sun and the wind. I did the same for all the leather gear I had removed from it too, and hung them to dry where they wouldn’t get twisted or bent. I put great care into doing a good job on all of it, like I would need to put it back to working steady when I was done.

While I was sitting in my camp chair taking the two cinches apart, I held the cinch I was taking off of it in my hands. I thought to myself that I ought to put it in a bucket of water to soak so I could clean it up good too. But I didn’t. Instead, I held it in my hands, ran my fingers over the horse hair that is worked into the cords and just enjoyed the smell and feel of it. Horse sweat has a salty smell, pleasant to those of us who have lived with it always. The horses I’ve ridden in recent times have all been sorrels, so there was no telling which hair belonged to whom. It didn’t matter, they were all good ones and had sweated for me doing something well that I had asked them to do.

As I had scrubbed the different parts of that saddle, memories came back from the miles and years I have ridden it. It’s a superbly crafted saddle that was made to my exact specifications. I ordered it and got on the list quite a while before I finally was able to pick it up and put it to work in February of 1982. There might have been a few things I would have had done differently on it at this point in my life, but overall, it’s been just perfect for the jobs I gave it.

I had sent payments out of each paycheck from a cowboying job I had in New Mexico, and when I got the note that said it was done, I headed back to South Dakota to pick it up. That was a pretty big day for me. My first custom saddle. I carefully loaded it into my trailer for the trip back to New Mexico, being sure to not scratch it or hurt it in any way. I couldn’t have been more proud of it.

That first morning back, I led my favorite horse in my string over to my trailer to saddle him up. He sure looked good with it on him. The cowboy crew all admired it properly and we loaded our horses up for the day’s work. My horse was kind of in the middle of the load. Just as we closed the trailer gate, I glanced up and saw the horse next to mine reach over and slide his top teeth across the seat. It was shocking. But, like the first door ding on a new vehicle, it broke the spell and made it a working saddle and not just pretty.

I rode it all day that first day in some rough country and it fit me so well that it never even caused a sore spot on me. When I pulled it off my horse, the sweat pattern on his back was perfect. Just what I expected from my saddlemaker and why I had ordered from him. It had some mesquite thorn scratches, a few cholla spines stuck in the new stirrups, and some good old dust on it, so it was definitely on the payroll.

I’ve ridden it and used it hard over the years. I’ve taken decent but not great care of it, though if anything ever needed fixed I got that done right away. It’s had fenders replaced, some cantle binding repaired, and various small wear-and-tear fixes. But, the tree and riggin’ are solid as a rock, and it still fits a horse perfect, as well as me.

The fingernail marks and spur tracks across the seat have been rubbed out when being cleaned and oiled, but, I know where they are. It sometimes did leak. But, all in all, it’s helped me ride some that didn’t want me to and been a pleasure to use.

It’s had baby calves, muddy lambs and tiny people packed on it with me. It was used by my growing son when he was between saddles and I was laid up and unable to ride. He started colts in it and it helped him do his job well too.

As I put the third coat of olive oil on it to soak in, I wondered if I would ever get it dirty or use it hard again. That gave me pause. Well, even if I don’t, someone will. Maybe one of my grandboys. It will serve another generation well I’m sure, and I’ve done what I can to keep it in condition to do it. 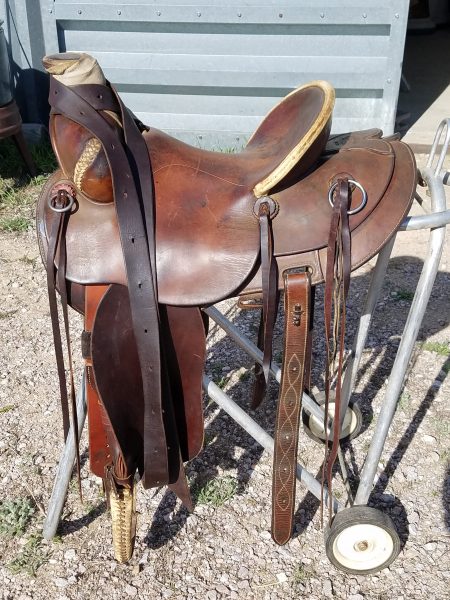 I hung all of the gear back on it. It’s a heavy saddle anyway, then all of that makes it heavier and harder for me to get on a horse. It didn’t used to be that heavy, I’m sure of it. Used to nearly swing itself on. But, I could no more ride without my rope, strings, hobbles, and boot top bag, than I can fly. I would feel positively naked without it all on there. 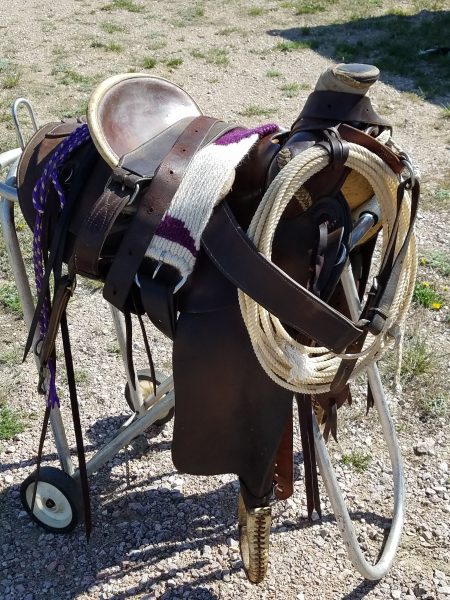 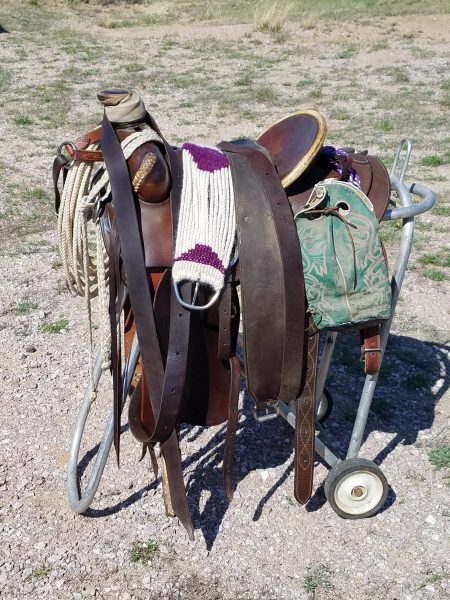 My brand new, hand made, mohair cinch that I got for Christmas is now on it, waiting to get some horse hair and sweat worked into it. I’m hoping that happens before too long.

I might bring the other cinch in, just to sniff it once in a while. You people who have made a living on a horse know what I mean about the smell. It almost smells like being young again, and still able to make my living horseback.

“If I could roll back the years, back when I was young and limber, loose as ashes in the wind, ‘had no irons in the fire…”