It’s been a while since I reported in from this windy ridge. Time sure passes quickly, though life itself seems to crawl along in many ways.

I was looking at branding pictures of cute little people on big horses, out helping on the ranch, riding with their folks, and learning the life they were born into. Those pictures are sure precious and I wish there had been more pictures of our growing up years, but, money was very tight and photographs were special things taken with an old Brownie camera and processed when Mom could work it into the budget. So, I understand why there weren’t more pictures, but still wish there could have been more. 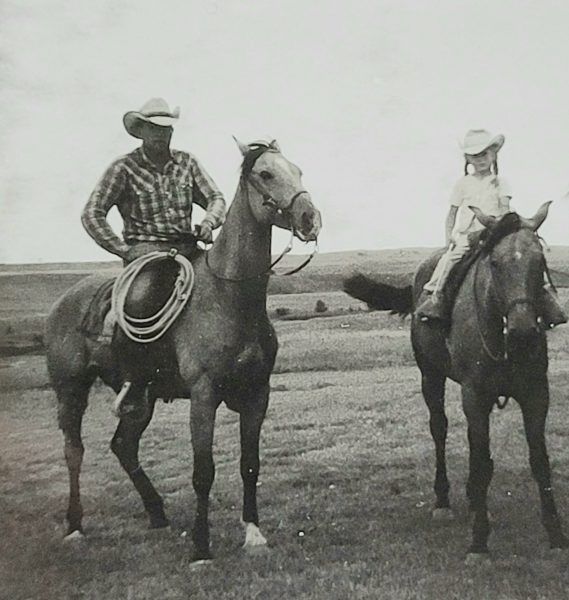 This rare picture of my Dad on Reno and me on Penny was cropped from a photo that included my oldest brother.

Being the youngest of six kids spread out over a 14 year span, there was seldom a time when there weren’t a whole bunch of us together doing whatever was being done on the ranch. Those times were especially rare with my very busy Dad. I’m sure my siblings felt the same way.

I can only recall a couple of times that it was just Dad and I when I was little. I was five years younger than the next one so was a preschooler when this particular memory occurred. My folks, Uncle and Aunt and my grandparents had leased a big summer range that seemed like on the other side of the world to a little girl.

I had gotten to go along on the gather of the steers that fall. The biggest impression of gathering that pasture was crossing a river for the first time. It seemed like the Mississippi to a little girl on a Shetland pony, as I was used to boggy, gumbo, seasonal creeks that you definitely crossed with caution. Crossing the Moreau River, while no big deal to my siblings on big horses, was terrifying for me. Skipper had tried to roll in it too, so that really added to my concern.

At suppertime a week or two later, my Dad announced that someone had called and they’d found the steer that was missing when we gathered. He told Mom that he was going to go up the next day and get the steer gathered and brought home. Then the magical words came out of his mouth when he said that he would take me along with him to “help”.

I was absolutely stunned! Dad had never taken just me along. Then, he added that I would ride Penny instead of Skipper. Penny was a big horse, full sister to his top horse Reno, and could walk with or outwalk any horse on the place. I loved Penny! She and I were the same age and were good friends.

Sleep came hard that night as all I could think about was going with Dad, just him and me, and me riding Penny. We were up bright and early, ate breakfast, saddled horses and got them loaded in the trailer. When we went through town, we stopped at the Gambles store and he told Mr. Milberg that his “top hand” needed a new pair of gloves. Mr. Milberg (one of my favorite people) took me over to the display with the little gloves and Dad said I could pick out what color I wanted. I picked the red ones as my very first new gloves, and they felt cozy on my hands as we headed out on that cool fall day.

Dad told me a few stories about the ranch country we were driving across, and I felt 10 feet tall, sitting there on the pickup seat with my Dad with him talking to me, plus, he had called me his “top hand”, right in front of Mr. Milberg. Oh my, the day was just getting better every moment.

After a long drive, we finally crossed the Moreau River bridge and approached the corrals on the flat to the east. As we pulled up to the corrals, Dad spied a steer in one of the pens, the brand showing clearly on his side. It was the steer we had come for. Dad was sure tickled as it saved a lot of riding in a big, rough pasture, but I could have just cried. I didn’t, mind you, but I felt like it.

Someone who had trailed to those corrals to ship out had picked up that steer and left him in the pens that morning, as they probably knew Dad was coming to get him. Good neighbors, but a heart breaker for a little runt of a girl who wanted nothing more than to ride Penny alongside Dad on Reno.

Mom had packed us a lunch in a shoebox, so we sat in the pickup and ate our lunch before loading the steer. I think Dad knew that I was pretty disappointed, but he was a busy guy who had plenty to do at home, so, we didn’t ever unload the horses for even a little ride. Even so, it had still been a big day for me, that obviously became a treasured memory.