Life has changed so much for me in the past year and a half. The change has been for the better, physical health wise, but not so much for my heart. The heart that lives and breaths ranching, cattle, and saddle horses, has taken quite a beating. But it’s still beating.

In April of 2019, I saddled a really good horse and gathered my cows for the last time. They were the cows of my lifetime, a bunch grown for 36 years from a base of little heifers I bought in ’83. I had been forced to sell most of them and the day had arrived for the new owners to haul them away. I was horseback, broken hearted, and in so much physical pain I could hardly see straight. But, that really good horse took care of me and we got the job done. That’s the last time I had been horseback.

I’ve since moved, and have no horses or cows here. That alone was really hard to adjust to, but I did since I have no choice. It did make one aspect of the change easier, in a way. Lurking in my mind and my heart, was a cold fear. It just laid there. There was a perfectly easy and logical way to get rid of it, but I was also afraid to do that. I didn’t want to know if it was as I feared. I really, honestly didn’t know if I could ride again. My hip, knees, lower back were in such misery after the winter and spring of 2019 that the possibility was very real and very big, that I was no longer able to ride. I didn’t want to know that. I didn’t even want to consider it, so I stuffed it back down every time it crawled out and made me afraid.

A good cowboy friend on an area ranch had asked me when I first moved here if I could come and help him doctor a bunch of cattle on the forest service permit they had. I declined, giving an excuse why I couldn’t, but knowing full well that I didn’t have it in me anymore to ride that rough country and rope big cattle. That stung, but it was sure nice to be asked.

This summer, a neighbor invited me to come and help them gather and move a bunch of cows on some really big, rough rangeland. Again, I declined, made an excuse of some kind, but thanked her for the offer. Again, nice to be asked.

But, that fear remained that I couldn’t ride anymore. Not knowing for sure was better than knowing I couldn’t, so I had avoided the issue.

I went to a roping that my son was in recently. I went to watch, take pictures, visit with folks and just enjoy the day from the grandstand. When I drove in and parked, he and his crew rode up and he asked me if I could make a run for cold beverages for our little group. Before I could say yes or no, he swung off his big gray horse and said “Or would you rather ride Flo around and show her the sights while I do it?”

For a moment I was frozen in place. This is it. I could know. But did I want to know? Yes. I needed to. I quickly changed from my sandals to my hiking shoes (no boots along of course) and did a few stretches to try to limber up. Flo is really tall, wide and with the double pads to accommodate her big withers, is like climbing on a barn. But, I had ridden her before. I trusted her. I trusted my son.

Leading her to a low spot and with my son holding the stirrup in place, I finally got my toe in it and climbed on. The moment of my right leg swinging over and my foot finding the stirrup was epic. Seems so simple, but, it was a big moment. I could straddle a horse. The smile my son had on his face showed he knew. He knows me so well and he knew. I’m sure I was grinning too.

I rode around the arena with his girlfriend and little boy, and it felt so good. As I loosened up and got into the swing of things, my heart was singing. I could ride. Yes. I could ride. My knee hurt like heck, my hip twinged when Flo took a quick step over, but I could tolerate that. I was back in my place. Not my horse, not my saddle, but my “place”.

I won’t make any more wild cow chasing rides, ride any colts, rope anything, or put in any 14 hour days, but I can ride. The world is sure a brighter place from the saddle. I’m glad I know now, since it turned out this way. 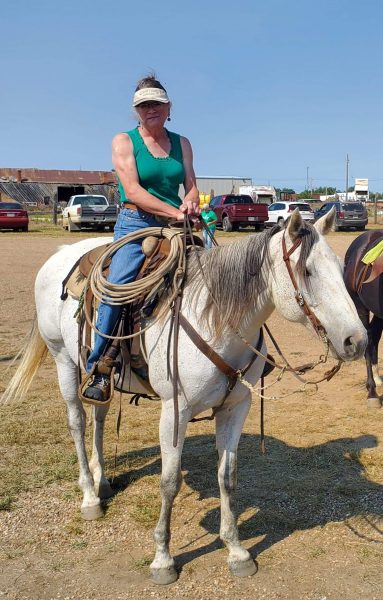