It’s been about a year since you’ve heard anything from me on here. It’s been quite a year. My journey has continued, as journeys tend to do. Just not in the direction I had believed it would. When I spoke to you last, it was on my Cottonwood Creek Chronicles page. I’m not on that creek anymore. No more rustling of the leaves of the trees along the creek, music of birdsong in the trees, or
bawling of my cattle in the distance. No more nickering of my horses as I go about my business. It’s all changed.
My home and the ranch I planned to grow old and die on are no longer mine. That dream and reality are gone. The bank, in spite of assurances earlier in the year that I was on track and that my business plan was sound, decided in December, a little over a year ago, that they could not renew my operating loan, that they had changed their “lending policies”. Therefore, I couldn’t make my payment the end of the year.
Panic, of course, hit me hard. Chest crushing, gasping for breath, heart pounding, head exploding, panic. I had put everything I had into that place. It was my HOME. It was to be my son and his sons’ homes when I was gone. It was home to my cows who I had been building on since 1982. They were settled there, knew where the water was, where the protected draws were in winter, where the shade was best in the summer. I had a nice bunch of share cows on the ranch as well. They and some pasture cattle, along with my cows, were the “good business plan” I had been told I had in the summer. Suddenly, I had all these cows to get through the winter and absolutely no money to do it with. I had hay, not an excessive amount, but hay if my usual cake and grass wintering plan could be utilized. I didn’t have much to buy cake, mineral, salt or diesel with, but I tightened my belt, dropped some things I felt were unnecessary, sold equipment I hoped I wouldn’t need, and kept going.

Immediately I started seeking alternative financing. I had cows, equipment, and all that other good collateral one needs. But, the bank wouldn’t turn any of it loose. Without that needed collateral, I couldn’t get anything but a free pen and a calendar from any lending institution I talked to. My bank didn’t NEED all that collateral as I didn’t owe them that much, but they hung on to it. Part of their new lending policy I presume. As each bank “interview” closed, the discouragement grew. The stress was unbelievable. My body was rebelling from not sleeping and hard work. February was bitter cold with endless snow. I kept moving snow so I could move snow until there was no place to put the snow. But, I had to keep doing it to get the cake and hay out to the cows. I bought cake with money I didn’t have to keep that protein and energy in them. I kept salt and mineral in front of them to help them battle the cold. Winter, February especially, drug on forever. 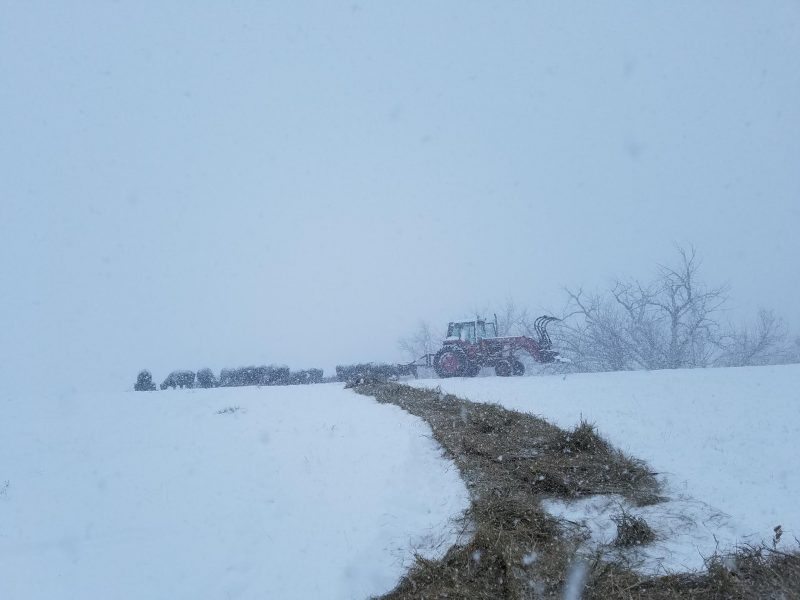 As I was running numbers and figures through my head, I realized that the number I had sold might just be enough to pay off the bank. So, I sat down with my calculator and it was within a few hundred dollars. I had a bull I planned to sell as a weighup, so I rough figured what he would bring, and sure enough, I could pay off the bank without having to sell all of my cows. Another friend messaged me and said that I could bring my cows to their place to run, so we made a deal to run the ones I had left, along
with my remaining bulls.
The first weekend in April, the snow had settled enough in the shipping corrals to get the gates to swing and sort cattle in. I gathered the cows and sorted mine off. The share cows got on the trucks and headed for home. My cow buyers were there and we sorted the ones off that they had bought and we loaded them up and they went to their new homes. I got back on my horse and trailed my remaining cows back to their pasture by the house. My heart was aching over the ones I had sold, but I was happy with where they had gone. A week or so later, my almost yearling heifers were hauled to their new home. I hauled the bull to the sale barn, took the checks for him and the others to the bank, and wrote them a check and paid them off. I didn’t have a warm feeling toward them over that, but it was good to be free of them at last, even if I was broke and on the verge of being homeless.
That homeless situation was bearing down on me. I didn’t have any money or means to rent a place to live. I was making payments on a lawyer’s student loans and had paid for a lot of feed and fuel over the winter. There wasn’t anything left. My son, good hearted guy that he is, lived in a truck in the oilfield. Not like I could camp on his couch for a bit. Thankfully, a dear friend of many years, offered me a place to live indefinitely. So, in June, my son finally got time off and helped me get moved. Mostly my belonging are in a storage unit for now. I brought what I absolutely needed to this big house of my friend’s.
My horses that I just couldn’t sell are in a safe place, along with my leftover hay and a tractor to feed it with. My cows are in a good place and well fed. My dog and my cat are here with me.
This is temporary. I don’t know at this point where I’m going next, but God does. In my parallel story to this long story, I will tell you all about my journey of faith through this. It’s pretty amazing. I am blessed beyond all reason, and am looking to the future. I will tell you why in the next installment. Stay tuned.