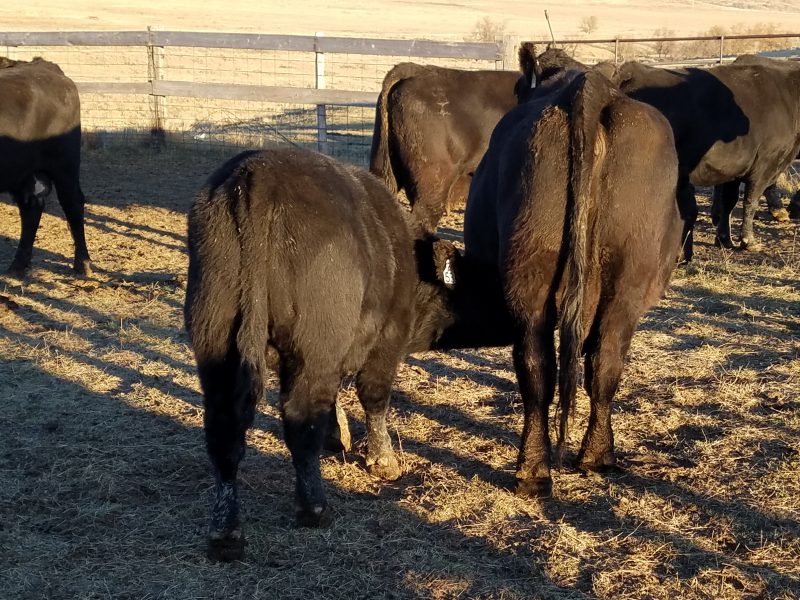 It’s been a while since I reported life from this windy ridge. The cold December wind is whistling around the house and making the eaves rattle. It makes me glad to have a job indoors to do today.

Fall works are done on the ranch where my cows run on shares. When those cows were pregnancy tested, an old cow of mine was open. She had weaned her 13th calf I believe, a nice heifer that was worth keeping.

That cow, #53, or Fuzzy as she was called due to her fuzzy ears, was quite a cow. She was the only one I had that I didn’t raise. I’d kept the old queen because she just kept raising big, fat calves and keeping herself in shape doing it.

But, back in August she was showing her years. Her calf was the first one that she’d had outside of the first week of calving. Every single year before, starting as a two year old, she’d calved the first week of calving. She was one of the last ones to calve this year, but had gotten busy getting that calf caught up to everyone else. She did a good job. But, I knew that this was the last one. I’d have to make myself sell her after her calf was weaned, though I would hate doing it. By not breeding back, though, she saved me that awful decision.

I remember clearly the day I bought her. I was sitting at the cattle sale visiting with a friend and watching big drafts of good calves being sold. It was early November, so the fall run was on. A ranch out of Wyoming had their calves there and they were a fine group. At the end of their calves, a single heifer calf came through. She was of equal quality to the best of their good heifers, weighing in at 563 pounds as I recall. However, she had broken a hind leg somehow while being unloaded at the sale barn. It was fresh, she was shocky and she kept laying down in the ring. It wasn’t a compound fracture so I knew she’d heal up and make freezer beef. So, I waited until they’d backed her way down without any takers and bid when she got to $13.25. I owned a broken legged, shocky, black heifer.

Having driven my car to town, I didn’t want to haul her home in the back seat, so I called my son who was day working out north of that town. I asked him where he was. He said he was at the junction on the north side of town. I told him to come to the sale barn as I’d bought a heifer.

I went and paid the $13.25, got my paperwork in order and met him out at the load out. He and the loadout man literally picked her hind quarters up and helped her into the back of the trailer. She was exhausted, still shocky and didn’t put up a fight.

There was a storm predicted, so we decided to put her in a stall in the horse barn. We bedded it deep in straw, put a bucket of water and some hay in there, so that when she got there she could just eat, drink and rest. I was hooking the barn door back when my son opened the trailer door, expecting her to be as she was when they loaded her. Somewhere on the 35 mile trip home, she had decided that it was time to declare war on humanity. When he swung the door open, that heifer blew out of the dark trailer, surprisingly fast for a three legged specimen, and in the pitch black, ran him up on the covered water tank. I nearly collapsed laughing, but he wasn’t amused. She made a lap around the little corral and went into the barn, still packing her hind leg, lower leg dangling. Once she found her way into the open stall, we hurriedly closed the door and left her alone. She was quite perturbed. I was still giggling. My son wasn’t.

The storm was a doozy and I packed hot water out to the barn to her for months. She ate the grain and hay, but stayed offended. One morning I was just starting to pour the bucket of hot water into her little tub when she butted the bucket. It was one of those sturdy, three gallon Farnam buckets, with the heavy handle. I’d had a belly full of her bad attitude, and I lost it. When it was all over, I had a bucket handle with two little pieces of blue plastic dangling from the loops and she had a new understanding of who was in charge. Never again did she ever threaten me.

After about four months of being rotated steadily through the four stalls in the barn, the weather finally broke enough that she could go outside. By golly, that leg was healed, just a little swelling where the break had been and perfectly straight. At branding time, I asked the guys to head and heel her so I could brand her and give her her shots, and none of us could remember or tell which leg it had been.

She bred that summer and grew into an exceptional cow. Year after year she raised one of the heaviest steer calves or a perfect replacement heifer. I kept every heifer. Fuzzy never bothered me, even when she calved, as we had that understanding. She was gentle, ate cake out of my hand at times, and just kept being the perfect stock cow. Long, deep bodied, matronly and an easy keeper, she was everything a range cow needs to be.

But, somehow, she got old. After all those years, all those calves, daughters and granddaughters in the herd, she was done. Time caught up with her and she became thin and slow. I’m relieved that she didn’t breed this year, as I would have nearly had to hold myself at gunpoint to sell her. It wasn’t easy as it was.

As far as return on investment, she did it better than any cow I know. She made the $13.25 I’d paid for her back many times over, and helped to build a cowherd as well. I’ll miss seeing her in the bunch, rough tongue reaching for a piece of cake. I gave her a good life and she gave me so much in return. I’m going to miss you old girl. You were one of the best.