It was late afternoon when I headed out to gather a single cow out of a pasture. The pasture had deep creek beds lined with willows and brush in many spots. The creek was nearly dry so the cow could very well be down in the channel out of sight. It was late summer, so the foliage was thick on every tree and thicket.

Knowing the devious nature of this particular cow, I was riding a really broke horse called Brandy. She was cowy, willing and capable. I was well mounted for the job. The other benefit was that this cow had a bell on her. Her reputation warranted it.

I headed out, riding the ridges and perimeter, checking corners and little draws as I went. I then rode the creek from the south end to the northeast corner of the pasture, where two creeks converged in a tangle of willows, cottonwoods, brush and deep cord grass. I saw mule deer, rabbits and birds, but no cow. I figured she was in that mess where the creeks joined so in we went.

My horse was sweated up good from the miles we’d crisscrossed back and forth over the pasture. I’d pull up occasionally while we were rustling around in the brush along where the creeks joined and listen for the bell on the cow. Silence. I was getting pretty frustrated and wondering if the bell had been lost or if the snakey old rip had left the pasture.

Having seen off into the channel all I could from both sides and ridden around and through every thicket of willows and brush, I decided to get higher. There was a big bluff that jutted out into the creek bottom and from the top, I hoped to be able to see down into the channels where I couldn’t from ground level. So, I rode back down the creek, found a crossing, and climbed that bluff.

Brandy caught her wind while we stood on the highest part, right against the nearly verticle drop off of about 70 feet. I’d look at a short stretch of creek channel, then ride a few yards, look again, ride a few yards, and look again. This was sure slow work. Brandy didn’t mind as a little breeze caught us up there and kept the flies down a bit, but she was studying the creek too. She knew why we were there. This wasn’t our first rodeo with this cow, as they say.

I had about decided that aliens had swept down and picked the cow up. She was a distinctive color that should show up pretty well. She might has well have been in camo though. The willows were just so dense and leaned out over the deep, undercut channel so far, that a herd of pink elephants could have been hidden.

We had to have that cow so we kept looking. We’d gone back and forth along the rim of that bluff several times. My eyes were straining to see her in the deepening shadows as evening arrived. Suddenly, I saw something move. I thought it was probably a bird, but I really focused on the spot where I’d caught the movement. I sidestepped Brandy back and forth, peering into the darkness under the thickest arch of willows. Something looked out of place.

I looked and looked, hoping to catch another movement. There! Right there! It was an ear twitching from a fly! I took a reading on the spot so I could find it again, and rode Brandy back to where we could slide off the bluff. Around the end we trotted, knowing that if this cow thought she’d been spotted that she’d be on the move. I got as close to the edge as I could, found a spot where the willows would allow me to see down into the channel, and there, tucked right up under the high bank and the willows that swept the bottom of the channel with their topmost leaves, was that evil witch of a cow, laying dead still, head flat out on the ground like a fawn. The bell that I hadn’t been able to hear was under her neck, all the tinkle silenced. She rolled her eye toward me, still hoping I hadn’t seen her.

I rode up the creek to where I could get down into the channel and headed back after her. She didn’t break until I was about 10 feet from her and spoke. Then she jumped up and hit a trot down the channel, bell tinkling merrily. We followed, not letting her out of our sight.

Finally, we got her up out of the creek bed and onto the open ground and headed for the corrals. The bell ringing steady and her eyeing me with disdain. Nellie, the Holstein milkcow, was conquered once again! 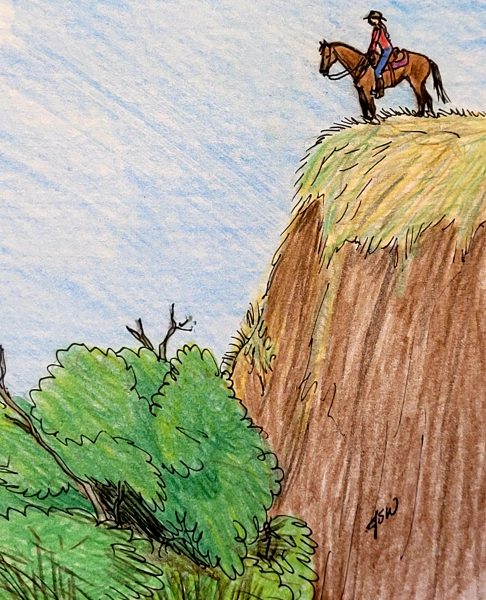