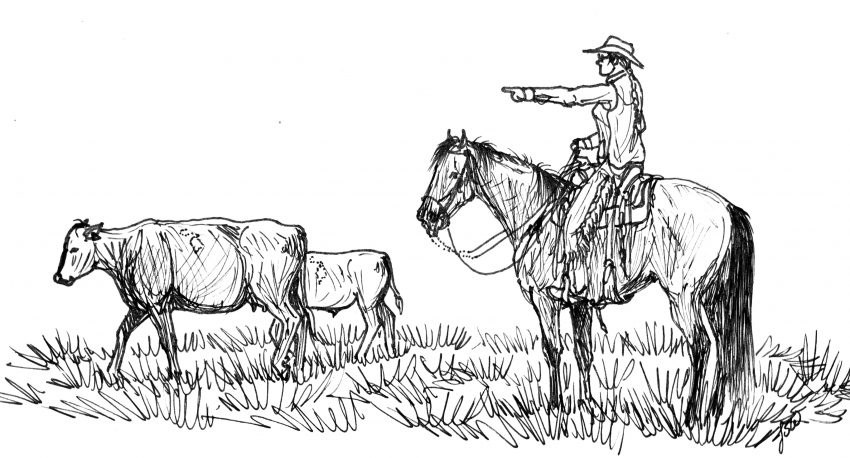 It was in the fall and I had gone to a pasture I had leased to gather the cows and calves and take them to a set of corrals to load them out to go home. The cows handled easily as I gathered and trailed them across the other pastures toward the corrals. Just below the pens was a creek that had steep banks and quite a lot of water in it, but there was a crossing with some rock and I’d crossed it on my way to the pasture, so knew it was good. There was a well beaten trail in and out of it from other cattle having crossed there too.

When I got to the crossing, I gave the cows in the lead time to look it over. They did, and concluded that it was an alligator infested death trap and turned themselves and others away from it. I was riding a really good older gelding, Chigger, who was a little stiff in front, but a rock solid horse. We did a fancy cattle cutting demonstration and horse/cow race going both directions up and down the creek bank, and finally, we were all huffing and puffing and sulled up on the meadow by the crossing. Chigger was dripping with sweat.

As I sat there contemplating my next move, which hopefully didn’t entail dragging them across one at a time, a cow that my small son had named Betty was facing me and looking right at me. I studied on her for a bit, and finally, in exasperation, said loudly, “Betty, you get your black butt across that creek and I mean NOW!” while pointing at the crossing.

To my amazement, she walked out of the bunch toward me, calf in tow, and turning, walked right to the crossing and went across, with the other cows falling into formation behind her. I followed them on across and they placidly walked up the hill and through the gate into the pens.

I’d said a lot of things to them during our fracas, but I guess it never occurred to me to give a direct order.