Tubing Horses Was Not for the Faint of Heart 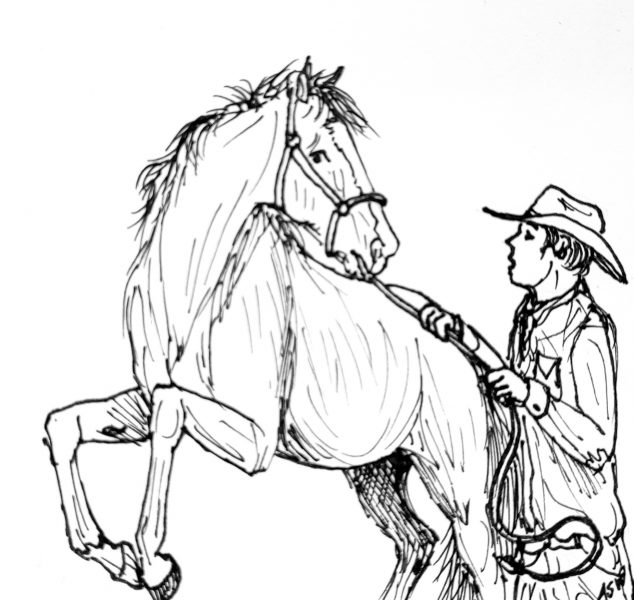 Old Tony was a fine gentleman I worked with on a ranch in New Mexico in the early 1980s. I don’t know how old he was, but the ranch owner said he hadn’t changed since he was a boy and Al was a Korean veteran. Tony was a man of pure Spanish blood. His family was old blood that had been in New Mexico since the days of Spanish rule. He had sandy brown hair with some gray and hazel eyes.
Old Tony’s Camp was on the southern end of the ranch. It was a big, rough stretch of country with deep canyons, mesas, and brush. Tony took care of it on a string of first pick geldings. He’d been on the ranch so long that any time he needed a young horse coming on, he got first pick of the stud colts when they were weaned. He knew the ranch bloodlines like his own and needlessly to say, he picked outstanding colts. His string was pretty impressive, both in appearance and ability. They were Tony’s horses through and through, had never been ridden by anyone else, and seldom handled by others.

In the time that I was on that ranch, paste horse wormers were not yet a thing. If you wanted to worm a horse, you tubed him. So, a day or two was set up with the vet to worm all the horses on the ranch. Broodmares, saddle horses, studs, youngsters, all had to be done. For you youngins that don’t know, tubing a horse consists of running a slender hose through one nostril and down into the horses gut. Then the dewormer is put down that hose. Horses weren’t impressed, to put it mildly. A twitch was used to subdue them and sometimes they still needed eared down to hold their head. It was wild.
We started at headquarters and did the 80 plus head of geldings from the cavvy first thing. Mind you, these were all horses that we rode and used all the time, so would be considered gentle. They fought like tigers to not be wormed, but, through muscle, grit and a handy gate to squeeze them behind, they got done. The broodmares were plumb salty, most barely halter broke, but they got done in an alley, snubbed to a post. We sweated through the young stuff and were finally done at headquarters. The last horses needing done were at Tony’s Camp, which was enroute home for the vet. We wearily drove the 10 miles or so, trying to recover from the ordeal thus far. I don’t think anyone was wearing a whole hide and lots of
shirts were torn.
Tony had his horses in the corral when we got there. He was distressed over the whole idea of doing this to his amigos, but he knew it had to be done. He caught the first couple for us, his old pards that were close to 20 years old or so, but then his tender heart got the best of him. Tears in his eyes, he retreated to his tackroom where he couldn’t see his horses being manhandled. He sure didn’t want to be a party to it. Those horses trusted Tony implicitly, but had no trust in us at all. They could all smell the wormer so knew what was up when we started, and to say they protested would be a gross understatement. Bite, strike, cowkick, jerk away, they did it all. Some of us had fresh horse tracks on us by the time we got
those grand geldings done. Tony didn’t come out of the tackroom until the vet drove out of the yard. He was as upset as the geldings and muttering to himself in Spanish. I sure didn’t blame him. It was an awful job and a terrible thing to have to do to horses. But a necessary evil for healthy horses.
Our saddle string was pretty touchy around the heads for a while, but finally got past it. I’m sure it wrenched Tony’s kind heart every time one of his good horses mistrusted his intentions when he bridled them. He sure hadn’t been a party to the deal though, so I always hoped they didn’t hold it against him.
As good as the good old days are in memory, tubing horses wasn’t. It was a nasty job for both people and horses. I’m sure glad that horse medicine has progressed as it has.