A Triple A Heifer Meets A Race Horse 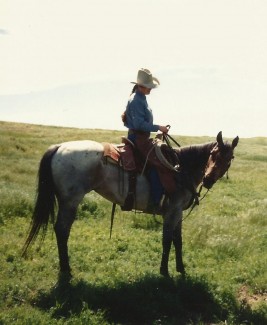 There may be critters more hair brained than a yearling Saler heifer, but I can’t think of one right at the moment.   While making my rounds checking some steers, I found a little bunch of yearling heifers that had infiltrated their ranks. The steers sure weren’t minding the feminine company, but I didn’t need the neighbor’s heifers in there shrinking the steers, so I sorted them off and trailed them down a fence line to a gate in the corner.

I was riding my Lily mare and she was pretty green and inexperienced but we didn’t have too much trouble sorting the heifers off so I thought I was going to get this little chore done without much sweat and effort. The heifers were of the light and mixed kind, with everything from Herefords to continental crosses. They moved along pretty nice to the gate and even stood while I rode around them and opened it. I eased them to the corner and the heifers walked quietly through the gate. Except for one. She watched them all go through, then threw her fuzzy head up and turned back.

This dark red heifer showed that she was probably about pure Saler blood by her type, then demonstrated it by her athletic ability. My young mare cracked down on her and put on a very nice cutting demonstration, but despite the nose to nose turns, we moved further and further from the gate.

My mare was of pure running blood so I wasn’t running out of horse, but I was definitely running out of patience. Soon we were nearly a quarter of a mile from the gate after some wild runs and turns. I decided this nonsense had gone on long enough and that the heifer was obviously nylon deficient and that’s why she couldn’t see the gate.

I stepped off my horse, tightened my cinches and checked everything over, then stepped back on and sent her after the heifer who was rapidly leaving at a high speed, her tail in a figure nine over her back. I got busy getting my rope down and building a loop, trusting that Lily was headed after her. When I looked up, we were right on top of that heifer! Lily was flying, as was the heifer, and I decided to try her one more time before roping her and we turned her in a big circle and headed back to the gate. My idea was to get her as close as possible, stick a loop on her and skid her through the gate, thus not taxing my green horse too badly pulling.

The heifer was really laying them down as we approached the gate then did a little turn each way, but Lily was on her shoulder every turn. The heifer finally just stopped and looked at us. She was shaking and gasping for breath and her tongue was out. My horse was taking big, easy breaths and her ears were busy watching the heifer. It was a standoff. The heifer glared at us, perhaps mentally calculating how winded she was and how NOT winded Lily was. Maybe the ready loop helped her see the error of her ways. I really don’t know. After studying us for a few moments, she turned around and trotted straight to the gate, went through it and then on over the hill in search of the others.

I followed her through, got off, loosened my cinches, and shut the gate. By the time I had the gate shut, Lily was breathing normally and the only sign we’d had a horse and heifer race was the sweat on her neck and under the skirts. My racetrack horse had plumb overwhelmed one AAA heifer and I knew that day that I’d never, ever get outrun by a cow brute while riding Lily.