To Spit Or Not To Spit

As I open the door and climb into my feed pickup, I glance at the inside door handle and see “used” sunflower seed shells in it. Oh for heaven’s sake. How gross. What is wrong with people, anyway? Further investigation turns them up on the floor too. 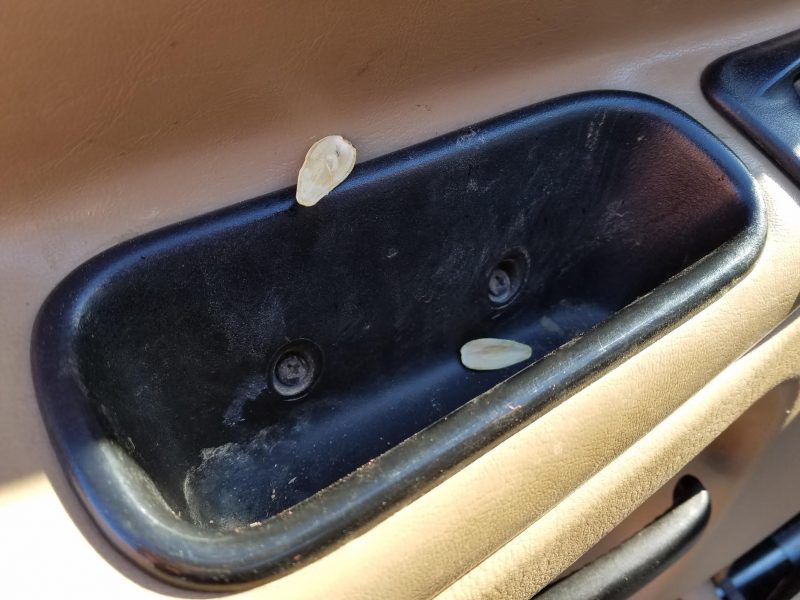 Well, I have to confess, it’s me. I have a three handful a day, at least, sunflower seed habit when out in the
feeding pickup. I usually have the window down so spit the shells out the window as I’m driving or waiting to cake cows. I really do try hard to get them all outside. On cold days I put them in the garbage by hand, so it’s not quite as big of a problem.

The problem is, though, I’m a bad spitter. No, let me correct myself, a really bad, dismal failure, horrible
spitter. No matter what I put in or get in my mouth, if it needs spit out, I am not likely to do it well or at all. Deep in my heart and soul, I know I should NOT spit. Even when my mind says to, my spitter just doesn’t want to work.

It all stems from an event when I was a very small girl. I may have been in school by then, maybe not. Don’t recall that. But, I do recall standing in the barn with my Dad and a couple of my brothers. I can remember where we were standing too, so the boys must have been going to saddle horses or something.

My brothers, being guys, would spit on the ground on occasion. It’s a guy thing I guess. Neither of them, nor Dad at that time, chewed tobacco, so they’d just occasionally spit. One of them must have done so, because, being a little kid and wanting to be one of the crew, I also spit. Probably loudly and not very well, but I spit on the dirt too.

Wrong move! Instantly my Dad grabbed my skinny little arm, swatted my equally skinny bottom and explained rather forcefully that LADIES DO NOT SPIT. Ever. Obviously, he was determined that I be a lady eventually, so he made that lesson stick like a brand.

To this day, even if I get something organic and nasty in my mouth, I will not spit. I probably have some
phenomenal gut bacteria because of the amount of cow manure and dirt that I’ve ingested simply because my first instinct is to not spit.

It’s pretty sad that my only “habit” is sunflower seeds. The shells simply must be expelled from the mouth. So, I have a twinge of “unladylikeness” every time I spit. Well, I try to. It’s bad. Really bad. I try to do it neatly and get them to shoot out the window like everyone else can. But to no avail. Oh, once in a while I’ll achieve success and both halves of the shell go shooting where I aimed. Accidents do happen. Usually though, one or both shells end up not making it out the window. Occasionally it’s because the wind blows them back in, but usually it’s because of lack of skill.

It must be an ordeal for anyone that happens to be around me when I’m chewing sunflower seeds because the risk is significant that they may also be wearing a piece of one before it’s over. I apologize of course, but if they know me well, they should know better than to stand too close.

I realize I’m actually good at other things. I draw well, have been told I sing well, make great cakes, am a pie-making genius, know how to handle cattle and am fair with a horse. I also build a magnificent “H” brace when fencing. But, at spitting I am terrible. I know Dad meant well, and if he was looking to make a lesson stick, he sure enough did. I just wish, sometimes, I could actually spit.