How To Attach a Curb Strap or Chain Properly

I have seen an error made in the assembly of a bridle multiple times over the years, and want to caution others against making the same mistake. This concerns those bits with a second rein loop or gag loop where the mouthpiece attaches. I have seen people put their curb strap or curb chain through that loop instead of through the bridle loop where the headstall attaches to the bit. 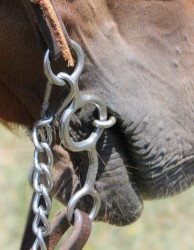 CORRECT! Curb chain is snapped into bridle loop on bit. 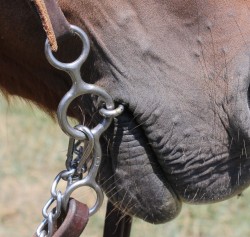 WRONG! Curb chain is hooked into gag ring on this bit.

At the very least, this is uncomfortable for the horse and makes the bit non-functional. Beyond that, it can make a head slinging maniac out of a normally broke horse, cause all sorts of training/handling problems and leave the rider with little or no control over the horse.

I drove into a ranch this past spring and observed the rancher riding through some cows in a lot. His horse, who I knew to be a well broke, nice gelding, was fighting his head and acting like a nut. I couldn’t imagine what was wrong.

I went into the barn with him as he put this horse in a pen and saw what the problem was. He had the curb chain on the off side buckled through the second rein loop at the mouthpiece of the bit. With the long shanked, ported bit that he was using, that was causing that bit to gouge the bar on that side of the horse’s mouth and probably bang against his teeth. The other side was buckled correctly.

He was wondering out loud why his horse was being such a jerk, so I diplomatically suggested I might know why and pointed out the curb chain fail-of-the-day. He couldn’t imagine how that had gotten that way, but figured he’d been in a hurry, like we all are sometimes, and put it on wrong when he put a new curb chain on. He was embarrassed but even more glad that his horse hadn’t actually lost his mind.

He changed it to the bridle loop and I’m sure they went back to having a nice ride through the cows the next time, providing a habit hadn’t been started.