TIM: The Recovery of a Foundered Pony #2

After a month of new growth time and proper feed, Tim was ready for his second trim. He had adapted to normal walking (no high lift on the knees and hocks!) and was bucking and playing in the corral. Obviously, his body and joint stiffness was gone and he was feeling better in general.

Bill started on Tim’s front feet by cleaning out all the dead, built up sole that he could. He trimmed the frog and opened the heels up more. The general health of his feet was visibly better. More of the toe was taken off and the walls were shaped again to encourage downward growth from the hairline. 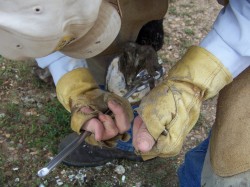 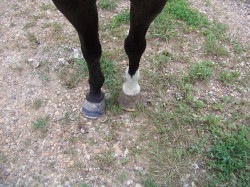 Tim’s second trim enabled his feet to load further back on the hoof wall, bringing his weight to bear more balanced and even on the foot. 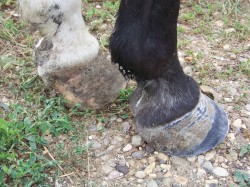 Due to the removal of dead sole, there was a chance that Tim might be a little sore, so Bill painted the soles with Venice turpentine, an old standby for toughening of soles on horses. He took extra care to get none of it on Tim’s skin at the heels, though, as it is rather caustic. 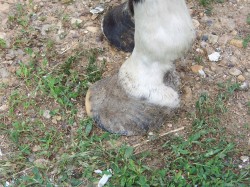 When Bill began on Tim’s hinds, his new level of flexibility was so obvious as he easily held his feet on the hoof stand to be trimmed. This position made it possible for Bill to better address the excessive buildup of sole due to Tim’s founder. 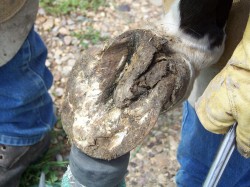 The sole is very overgrown as is shown with this view of the frog and sole. 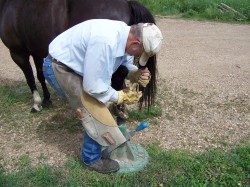 Tim can bend at the hock and rest his foot on the stand to be trimmed.

The long hind toes are again trimmed with the standing trimmers. 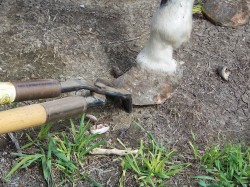 Due to the difficulty in trimming excess foot on the first trimming, the hinds were a little behind the fronts as far as recovery of shape. The second trim began to restore shape to the hinds and began to put the weight where it belongs on the foot. 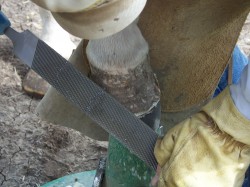 There was quite a change in the appearance of Tim’s left hind when it was done. 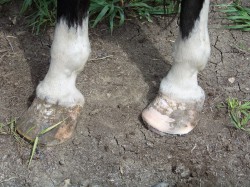 The overgrown sole looked much better after being trimmed out and Venice turpentine was applied for soreness. 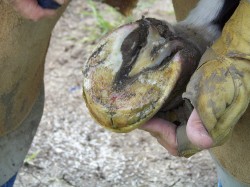 The right hind was done the same as the left, with the long toe taken down first with the standing trimmers. The excessive overgrowth of sole on the hinds had rocked Tim back on his heels, so being able to begin the removal of that is helping Tim even more with his hind limb soundness. The honeycomb effect from the found is very apparent in his hinds. 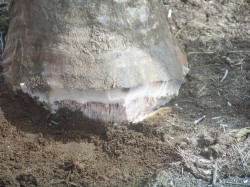 When the second trim was complete, Tim’s angles were much improved and he was standing under himself well. 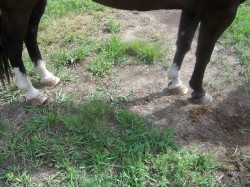 After his second trim, Tim’s angles are improving and he’s standing with his feet under his body.

Ultimately, Tim was now ready for his new “job” at our place and met his little cowboys a few days after his second trim. He seemed to be quite pleased with his little partners and jauntily took them for many rides around the place. 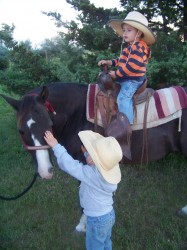