TIM: The Recovery of a Foundered Pony 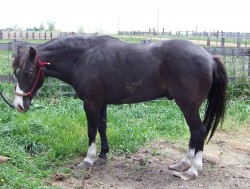 Tim, before his first trim. Note hard appearance of belly.

After admiring Tim, a beautiful Welsh type pony for many years, his foundering on grass each year, and his eventual suffering due to lameness, I was finally able to sweet talk his owners into selling him to me. The day they finally gave in, he was unable to stand to graze and was drawn up and severely lame on all four feet. Tim’s future looked pretty grim.

The next day, we went and got him and found that he was doing a little better. His owners had followed my recommendation and had gotten him in the corral on grass hay and given him some Bute for the pain and inflammation. He loaded right up and we brought him home, excited about the prospect of returning Tim to a normal life, sound feet and a new job as the grandsons’ horse.

Upon his arrival at his new home, my farrier husband Bill began the task of giving Tim his feet back. Tim was very stiff in the joints from so many years of standing to accommodate his foundered feet and no trimming. He was drawn up with a hard line on his belly which is typical of horses with laminitis. When standing he rocked backwards with his front feet out in front and his hinds up under his belly. The photos don’t show the stance due to him having been given Bute to relieve the pain. 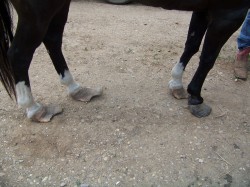 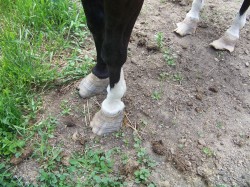 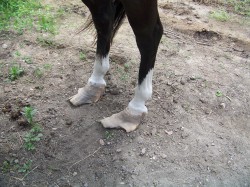 We had been told that in the past he fought the farrier and kicked, so we were pleasantly surprised to find Tim to be a very willing and patient horse. Being so small, ponies can’t be expected to raise their feet as high as a big horse, but some farriers try to force it and the pony feels like he’s tipping over, thus he fights. The pain in Tim’s stiff joints also made it hard for him to stand normally for the farrier.

A soft spot was found for Tim to stand on and the process began. Tim’s long toes made it impossible to trim him with normal nippers, so Bill began by taking the excess hoof growth off with his standing trimmers. It’s important to note that Bill is very knowledgeable about the interior construction of the horse’s hoof and knew when to quit before he hurt Tim or caused serious damage. 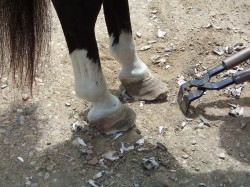 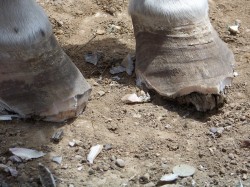 Many breaks were taken to rest Tim and his cooperation continued. After the excess hoof was removed on all four feet, Bill began to trim the front feet with his standard nippers. The frogs of Tim’s hooves were shriveled and unhealthy due to there being no pressure on them when he walked. The heels of all four feet were badly contracted and showed extreme overgrowth due to lack of wear as well. Tim’s soles were built up and hadn’t shed normally for a long time, so he was standing on his heels and thick soles on the front half of his hooves.

The frogs were trimmed out to live tissue and the heels were opened up and excess growth removed. The whole hoof capsule had migrated so far forward due to the founder and neglect that it was essential to get the hoof back closer to it’s ideal location under Tim, but this will take time.

At no time was Tim asked to flex his knees at a 90 degree angle, due to his stiffened stance. Instead, Bill held the hooves just above his ankle to work on them.

Tim was given some time to rest before starting on his hind feet. Knowing Tim couldn’t hold his feet behind him, Bill lowered his hoof stand to it’s lowest setting and let Tim rest his hind foot on it under his belly. It made it more difficult for Bill to work on his feet, but he did all he could in that position. Tim could rest his full weight on the stand so he didn’t have to put so much weight on his other hind leg too. Bill was able to shape the hoof and clean out some of the excess sole on the stand, though the frog couldn’t be addressed. 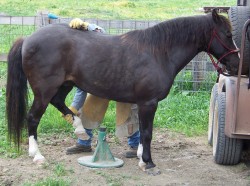 Tim’s stiffness wouldn’t allow his hind feet to be picked up as normal, so a hoof stand was used.

Tim’s hind feet frogs and heels still needed cleaned out so Bill kneeled and was able to turn the hoof back and rest it on the ground to do so. It didn’t make it easy for Bill, but it worked for Tim once he figured out what Bill was asking.

With his rasp, Bill aggressively shaped all four feet to a more normal shape and angle. If he hadn’t removed the excess hoof wall on the toe, the hoof would continue to grow that way. By removing it, the hoof can begin to grow down toward the ground instead of continually migrating forward. Again, Bill’s knowledge of the hoof was critical in deciding how far to go with the shaping. 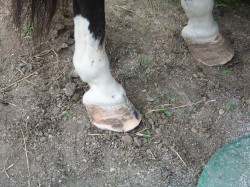 After excess wall was rasped off of right hind foot. 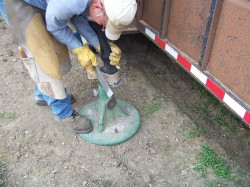 After being worked on for less than two hours, Tim’s feet looked entirely different. His demeanor was chipper and comfortable and when he was led off, he found that he could actually walk. The adjustment to his new hoof size took over a week, but he finally quit doing the high lift with his knees and hocks.

As a reward for all the hard work, when Tim was turned loose in his new corral, he actually took off at a trot to check it out. It’s unknown to us how long it had been since Tim had been able to move like that.