Some of the outfits I day worked for over the years had big Longhorn “lead” steers that they ran with their cows and yearlings. They were all, as far as I know, former roping steers, therefore had attitude running out their ears. That attitude usually being to work against you in any circumstance in which you were handling the cattle.

These old steers got huge and their horns were incredible. They sure added to the scenery even though they could be the most aggravating cattle on the ranch to handle. The first course of business any time we gathered the cows was to sort those big boys off before they decided to just leave through whatever fence they were standing by. There had been a few delays at times and there were always corrals to rebuild and cows to regather as a result.

We had gathered a big bunch of cows and calves, along with the giant steer that ran with them, into a set of corrals that looked a lot sturdier than they were. There was a long alley, about 12 feet wide, which was too narrow to start with, that we sorted out of to separate cows from calves and suchlike. I was in the alley on a horse and was bringing the cattle to the sorting gates in a steady trickle, trying not to overstress the tired planks and posts of the corrals.

I was riding a big, stout, good looking mare I had raised. She was a lot like those big steers in that she worked against me most of the time. She was sullen and had her brakes dragging every step. Her usual practice was to ignore anything I asked then pout when I got after her for a response. This particular day had been very pleasant thus far due to her attitude. She had lollygagged and stepped over just after a cow got by me every chance she got and was taking apparent pride in her ability to make an easy job harder.

The alley was being refilled from the far end by the rest of the crew, so the big steer, which was probably 16.2 hands and weighed over 1600 pounds easily, was finally in the alley. His horns were impressive. Probably close to seven feet, tip to tip. My horse hadn’t paid attention to a single thing that had happened thus far, so the feeling of doom when I saw that steer in the alley was legitimate. He trailed out of the packed bunch behind some cows and I felt my horse change. She picked up her head and watched that steer. He got closer and closer, thankfully at a walk, and her head got higher and higher, eyes wide open, and she snorted.

You have to understand that my horse was a tank. She was about 15 hands and weighed in at a dainty 1350 pounds in working shape, which was wide. My legs took up another six or eight inches on each side of her. Mathematically, the steer’s horns and my horse and body weren’t both going to fit in that alley.

Apparently her math skills were working hard as well, for just as the big steer got to us, she drew herself up as tall and skinny as she could, mashed my knee against the fence, and got her head right against the planks as he went by. Thankfully, he was polite and turned his head so his magnificent horns were nearly vertical as he passed.

We both let out a sigh of relief that we hadn’t been touched by a horn in the encounter. Thereafter, I knew full well that she was actually paying attention, just not cooperating. But fortunately, the big steer cooperated that day and kept anyone from getting hurt. 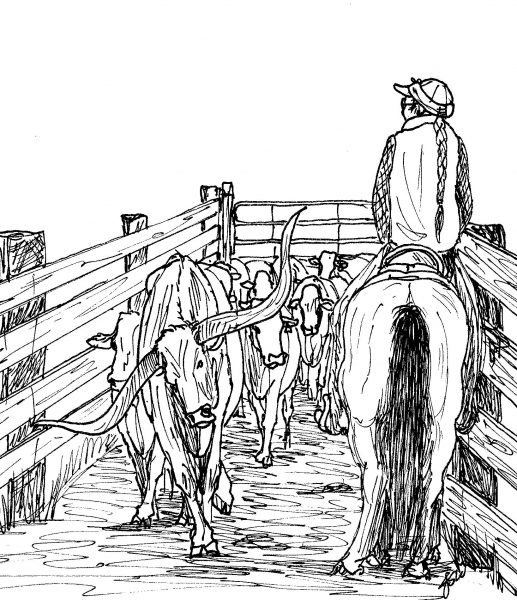