I was having a chat with a horseman friend a while back. He’s been at the cowboy and horseman game for many decades, as have I, and we always have lots to visit about. He brought up several points of contention for both of us and suggested I address the points in a column for this site.

First off, horses are measured in hands. The term “hand” comes from the width of a hand, which varies, but is accepted as being four inches from side to side. In the usage of measuring the height of a horse, the four inches in a hand is standard. Always has been.

When one measures a horse, if they don’t have an actual “stick” that is meant for the purpose, you use a tape measure and a level across the withers and do it on a level, flat surface. Measuring from the ground next to the horse’s hoof and up to the bottom of the level on the withers gives how many inches tall the horse is. You then divide it by four and come up with how many hands tall the horse is. Pretty simple concept. A horse that is 60 inches tall at the withers is 15 hands. 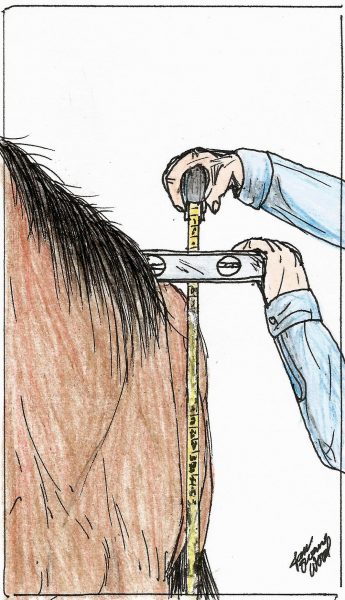 On a flat surface, use a level and tape measure for an accurate measurement of a horse.

Here’s the gripe that we both have. My friend and I, and I’m sure all of you, have seen the ad for a horse that is said to be 15.5 hands tall. Interesting. Is that horse actually 16.1 hands? Nope. They are using the decimal system on something that isn’t and making the incorrect statement of a 15.2 hand horse (15 and a half hands) with the five representing half of 10, which has nothing to do with the measurement of a hand since a hand is four inches.

Second point of contention discussed by my friend and I is the term “by a stallion and out of a mare”. I hear it turned around more often than not. A foal is sired by a stallion, therefore, is BY a stallion. The mare carries and gives birth to the foal, so the foal is OUT OF the mare. The foal can’t be out of a stallion. He is simply the sperm donor and doesn’t produce anything but the sperm. The mare produces the egg, which when fertilized by the sperm, develops into a foal and comes out of the mare at birth. Easy peasy. By a stallion, out of a mare.

This third point, though it wasn’t discussed in my friend and I’s conversation, should have been. People need to weigh some horses to figure out what horses actually weigh. Most way over estimate the weight of their horse, as it seems stylish to have a horse that is heavier. I saw an ad for a stallion that was said to be 14.1 hands and weigh 1400 lbs. He was NOT a Haflinger either. He was a Quarter Horse. I’m hoping the ad had a typo, because a 14.1 hand horse that weighs in at 1400 lbs would have the nubile cutting horse moves of a morbidly obese Belgian. A 1400 lb horse is really big. They have to not only have frame and muscle mass but lots of bone. I’ve had one horse that came close to 1400 lbs but he was a measured on cement with a fresh trim 16.3 hands tall and he was stacked wide and solid. He cinched deeper than any horse I’ve ever saddled too. He was weighed on a certified livestock scale, so I know it was correct. He was also fit and in perfect condition, not fat.

I didn’t write this to hurt anyone’s feelings, or heaven forbid, make someone mad. I’m hoping to educate. I had to learn all this stuff and I had some pretty gruff teachers. Being a horse owner and a horseman are separate things. You can be one without the other, so educate yourself always, and don’t ever quit learning.