The Straw That Broke The Camel’s Back

Almost 40 years ago, I had a gelding called Traveler that I’d ridden for several years. He was tall, narrow, very Thoroughbred looking, and had a lot of staying power but was beyond lazy. He loped easy, trotted okay but couldn’t outwalk a sloth. I peddled him every step we took. I swear, if I’d have lost a spur I’d have known instantly as we’d have walked in a circle when that side quite moving. He was gentle for dudes and kids, though kids with short legs probably couldn’t have gotten him moving. But, for all of his gentle nature and laziness, he had a side that not many knew about. He could really
buck when the notion took him. Thankfully that wasn’t very often and usually I was mad enough to eat him when he did.

I had a big day ahead of me with lots of miles so I picked him out of the horses as he was just plain tough and it was his turn. I left the corrals long before daylight to trot and lope to the far pasture I needed to ride on. It was supposed to be really hot, as July and August days can be, so my hope was to get my circle made, everything checked and be back to the corrals before it peaked at above 100 on the thermometer.
Before I even reached the far pasture to get started, I cut across the corner of a pasture with an alfalfa field in it that had a decent second cutting coming on it. Out in the pretty alfalfa was a package of cow/calf pairs who most definitely didn’t belong. I rode around them and started them to the gate back into their pasture. One turned back and gave Traveler and I a workout. Lazy as he was, he was a cowy sonofagun, so we thwarted her every effort, but still ended up way back into the pasture before she finally gave it up and decided to be returned to her calf and the others. After putting them back where they belonged and pushing them toward the closest water, I rode back and went down the fenceline to find the problem. A broken wire and missing staples smacked of an antelope attack, but with my fencing pliers and staples I carried, I got it put back up and the broken wire pretty tight. On we went. It was warming up fast.

The actual cattle I’d gone to ride on and check bulls really didn’t give me any trouble once I was in the pasture, but it was a lot of country to cover and really breaky and rough, so it took hours to make that circle. I was relieved to find everything in order and after spreading some bulls around better, we headed for home. It was a very long ride back, but from the end I finished on, cutting across the neighbors pastures would shorten the distance.

A section of pasture I crossed had a set of big Simmental cows in it with a couple of huge bulls with them. As I rode through, I checked those cattle too, as a neighborly thing to do, as the elderly ladies who owned them probably hadn’t seen them for a while. Good thing I did. Another fine neighbor ran a big string of replacement heifers along the east fenceline of the section and those goofy things had rubbed a gate down and there were around 35 head of them in with those big bulls, not the Longhorns they were supposed to be running with. They calved in mid-May, so those heifers were cycling hard. I simply had to get them out of there. So, I pushed the whole works down to a corner near a gate and started sorting. I didn’t have a good dog to help or anything, just a tough, cowy horse and a bullheaded determination to get the job done before more damage could happen to the heifers. It took a long time and it was really hot by the time I finally closed the gate behind them, but the heifers were back where they belonged. 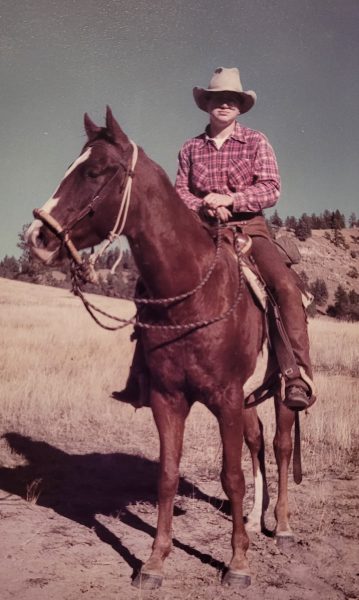 Traveler had been going awfully hard for a long time and was to the point where he had about quit sweating. He had the thumps pretty bad and was breathing awfully hard. I aired his back and let him blow for a bit while watching the heifers trail away toward water. I needed to water him as soon as he was cooled off a bit, so I got back on and walked him a mile or so to a tank and let him drink. I was feeling pretty sorry for him as he’d had a heck of a day and we were still miles from home. He was caked with dried sweat, with crusty lather under the edge of the breast collar and down his sides. After letting him drink, I headed him for home. He ambled along at his usual mosey, and I was relieved to see him turn a little fresh sweat on his neck from the heat. I’d hoped I hadn’t ridden him too hard. Seeing him sweat a little on a hot day at a walk was at least normal.
I’d planned that morning to trail the extra saddle horses back to a pasture a ways from the corrals when I returned. The boggy, bottomless 300 yard across creek on the way made it a fresh horse wreck every time I did, so, I’d left them standing in the corral off of water until I got back. When I rode up and opened the gate, they made a beeline for their pasture and the big tank of water it offered, not even pulling any of their usual nonsense on the way. Traveler and I walked along behind them and shut the gate.

We were both looking forward to getting the day wrapped up, I’m sure. I was absolutely pooped, as I know Traveler was. We wallered our way across that awful creek the second time, which in spots a horse would sink to his belly in the black goo, and as we came out on the other side, had a steep bank to climb to get up on the flat.
I absolutely will not tolerate a horse grazing when I’m on him. Never have, never will. Traveler knew this after our years together, but, as he climbed that bank and was about halfway to the top, he reached for a bite of clover, which was nose high. I used my ring finger to correct him with the mecate rein on the bosal. He took another lunge up the bank and reached for another bite. That time I corrected him with a spur in the ribs.
Well. Even a very tired horse can have that “one straw that broke the camel’s back” moment. He’d been encouraged with a spur many times that day, sometimes pretty firmly to get his lazy butt in gear, but that one last tap just did it for him. He exploded!
He launched straight up the bank, then sucked back under my right stirrup. We were way in the air when he did it and when his head disappeared to the right and down, it suddenly occurred to me that my head was closer to his left knee than my butt was to my saddle. The ground rose up to meet me very abruptly and I was suddenly laying on the bank, watching as my exhausted horse bucked like Tipperary across that boggy creek, stirrups cracking above the saddle. I watched every item in my theretofore tied shut boot top back be distributed across the muddy froth, until he stopped, spraddle legged, on the other side.
I determined that though I was slightly maimed, having crossed the saddle horn a bit close, and landing badly on my left shoulder which made my arm flop a bit, I needed to get to my horse. I finally got up with some difficulty. I slid down the bank and picked my way across the creek, following his path and picking up items along the way. When I got to him, I saw that my mecate get-down that had been hitched firmly on my saddle horn was dragging, the hanger of the bosal was hanging below his muzzle, though the bosal was still on his nose, held there by his flared nostrils. My saddle was slid back a ways in spite of the breast collar. Both latigos had been bucked out of their keepers and were hanging on the ground and black with mud. He was gasping for breath, but turned his head and nuzzled me when I put my hand on him.
I rearranged everything, returned my stuff to the boot top bag, and reset my saddle. I cinched him up pretty good as I’d have only one arm operating to get on. He stood like a rock while I pulled myself on like a gunsel. We recrossed the creek, climbed the bank again, this time without nibbling, and walked on home.
At the barn, I unsaddled him, washed him and curried him off good. I wasn’t mad at him, nor was he at me. I left him where he could eat hay and drink in the barn with the big doors open to catch a breeze.
He recovered from his part of the deal a lot faster than I did, believe you me. We only had one more set to before I sold him that fall and left the place and I was mad and rode him through it fine. But, we never had another disagreement about grazing while being ridden. Once was enough for both of us.