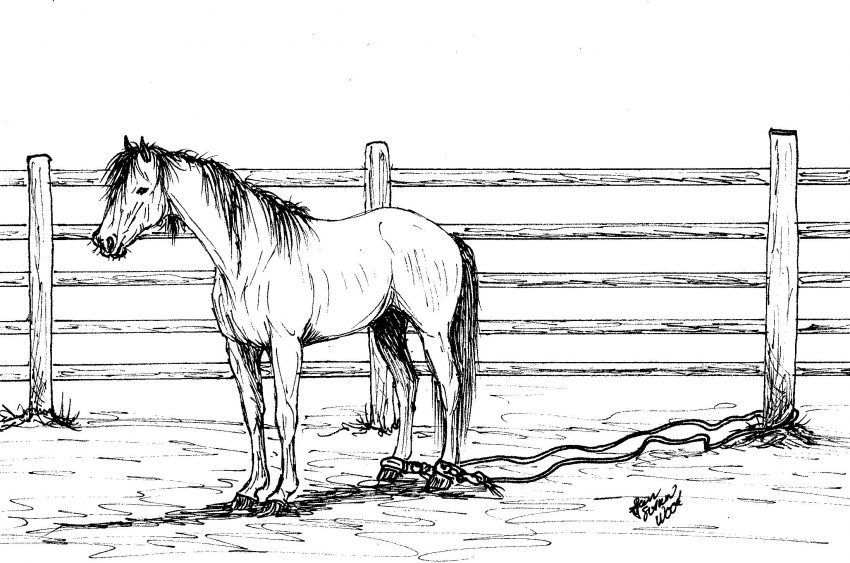 It’s always so nice to handle horses that have been started right and are gentle around the body and feet. But, they’re not all like that. With all of the good clinicians and forums to learn the “right” way to do things with our horses, it’s probably hard for some people to decide to do something different or more “old timey” to get by a horse that isn’t quite so user friendly. I am going to explain a way to handle some of those snortier horses that may keep both them and you from getting hurt. The disclaimer here is that you may need to know how to put a scotch hobble on a horse to accomplish what I’m going to explain. If you don’t know how to do that, you may want someone with a bit more experience to accomplish what my lesson here will be today.

The method is called “hind legging” by some and a “Santa Maria rig” by others. Either way, it works. I took in a big, snorty four year old gelding that had been kind of halter broke as a weanling, roped and stretched out to be gelded as a two year old and not touched since. He was pretty suspicious of my motives and really smart, so I knew I’d have to be careful and may even have to cheat a little to get by him and get him started. He was defensive and would kick without much provocation and his aim was improving, so I took him to a stout pen and worked on his leading and handling on the ground.

Once he’d let me handle him a little I put a scotch hobble on him. I tied his hind foot up just high enough to rest the toe on the ground when pulled up toward his shoulder. I used a big, soft cotton rope, at least 1 ¼” diameter, so as not to rope burn him. Once I had that on him, I let him work himself through standing like that for a while. Once he got that figured out I could proceed. 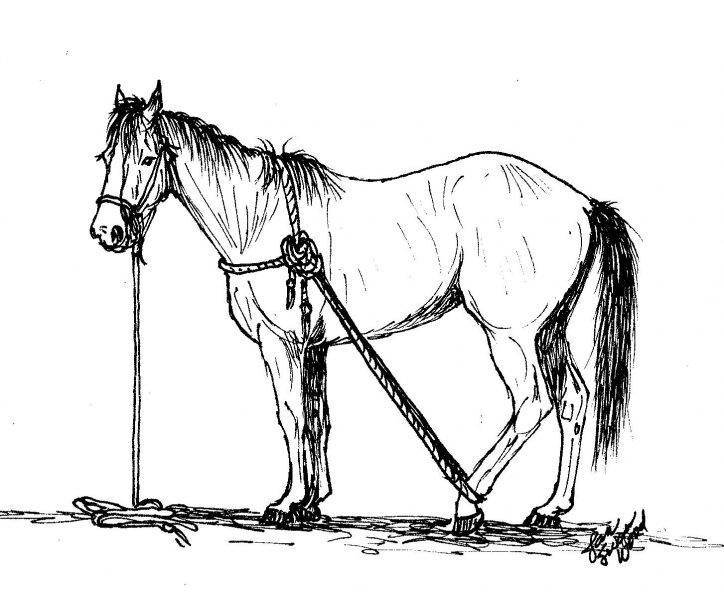 This is a simplified version of scotching up a leg. Normally there would be more wraps on the foot rope.

I worked him over to within about eight feet from a stout, smooth, round post in the pipe fence line. I sacked his hind legs out a little with my big cotton rope, getting him used to the feel of me touching them without getting my head too close. Once he put up with that quietly, I put a fleece lined picket cuff on his off (right) hind pastern, leaning in from behind his left leg which was restrained, keeping contact with him from the hindquarter down to the foot. I also kept contact with the tied leg so as not to startle him and to be able to feel if he was bunching up to try to kick (they can still kick forward, just not backwards or as far sideways). I had the halter rope draped over my arm too so I could turn him toward me if he moved.

Tied into the ring on the cuff was about 20 feet of the big cotton rope. I took the long end of that rope and slid it around the bottom of the post, then brought it up and tied the end into my other cuff. I placed that cuff just above the scotch rope on his tied hind foot, working it down to be sure it was above the rope but below his fetlock joint.

All the while I was doing this I kept rubbing and petting on the gelding. He was really wary and making this a positive experience was very important to me and for his further training. He stood nicely with very little moving around, which isn’t always the case.

Once I had him all rigged up, I took the scotch hobble off of him and let him stand. I led him very slowly out to the end of the foot ropes so he could feel the pressure. He shook each hind foot a few times, feeling the restraint, but since he’d had his feet messed with while I was ground working him, he didn’t panic. When he was standing quietly I removed his halter and moved away from him.

When he thought he was free, he decided he should leave. When he did his hind legs were stopped and pulled behind him by the rope. It’s important to have the horse out at the end of the rig so he can’t have any speed up this first time. He stepped back, shook each leg vigorously, then tried it again. He never fell and couldn’t get enough pull on either leg to hurt himself.

I’m not saying that a horse can’t cripple themselves with this rig, but it’s less likely with no solid point to pull against. They will struggle, some do fall down but can get back up. The fat, soft rope won’t burn them if they get it wrapped up and they can be left like this until it suits you to turn them loose.

In this horse’s case, I left him that way for several days. He was a big, broncy horse with minimal handling and I wanted him to start seeing me as something positive in his life, so I carried water to him in a bucket and fed him his hay on the ground out at the end of the ropes. He started looking forward to my arrival instead of blowing rollers and trying to leave. Each day I handled him all over out at the ends of the rope, brushing, rubbing the ticklish spots and picking up his feet. I finally saddled him and unsaddled him there over and over until that was no big deal for him.

The day he nickered at me when I approached I unhooked him from the fence, by this time trusting him enough to very carefully remove the cuffs without the scotch rope. He’d learned that it wouldn’t kill him to be handled, and that he didn’t have to fight to defend himself. He never kicked at me again in the rest of the time I had him and rode him either.