When my son Colin was a boy, he worked beside me every day, no matter what I was doing. He started drawing a paycheck dayworking horseback when he was about seven years old. He didn’t get a check because he was a cute kid, though he was, but because he was good help and would do whatever he was told to do.

His good mare that he rode was getting on in years and was still sound, but I had it in my mind that a young one coming on would be a good idea. I bought a speed bred weanling that had had a rough start and was thin and undersized. Her old mama was just worn out and unsound, so that year just didn’t give any milk and the filly showed it. But, the weanling was structurally sound, perfect legs and had a fabulous pedigree, carrying some of the bloodlines that I’m a big fan of.

My plan had been to give this filly to him for his eighth birthday that fall, so I bought her and brought her home a couple of weeks ahead of that. He was drawn to her like a magnet and I kept saying I was too busy to mess with “my” new filly and that I sure wished he would spend some time with her. Of course, he loved the potbellied little thing and brushed her and handled her every day after school.

When queried about what I was going to name her, I claimed I just couldn’t think of a good enough name. I asked him what he would call her if he could name her and he decided that Callie would be a good name. I thought that was an excellent name, so we called her Callie.

In preparation for his upcoming birthday party with family, I had found a big purple bow and tied it around her very skinny neck and took a picture. I wrapped the picture up in a box with a note that said “Happy Birthday, I’m yours”. When he opened that he at first looked puzzled. Then while I watched, the dawning came and he understood what it meant. The look on his face was absolutely priceless! His mouth hung open, he couldn’t speak, and his eyes nearly teared up. 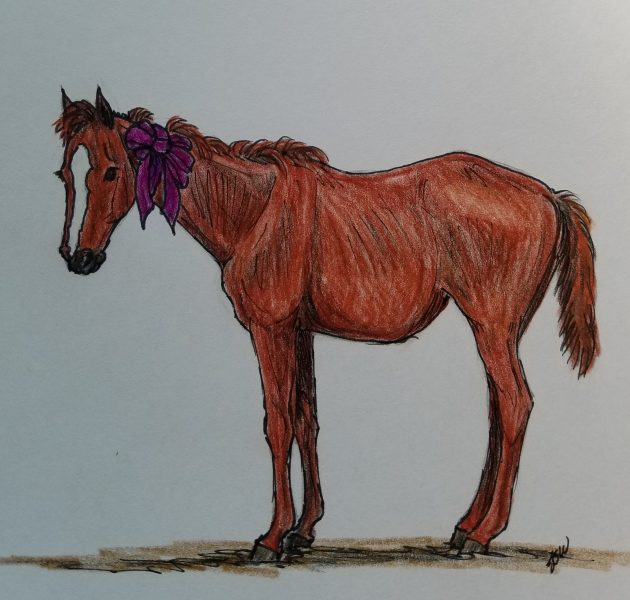 If he loved her before, he absolutely fell head over heels after that. She was led all over the place and he brushed her, handled her feet and talked a lot about when she would be big enough to ride. By the time she was a yearling she had been saddled and led through gates, doors and nearly into the house. He drove her around the yard and the corrals with long reins on her halter. He’d walk beside her, arm over her back, and guide her along like he was direct reining her.

She therefore started like a dream in the colt class and he even used a flag and helped some of the other people get their colts moving. He would ride her in the horsemanship class each afternoon, dragging barrels, tarps and doing it all without a problem. My clinician friend just kept grinning with all that Colin could do with his filly. She was absolutely fearless with him on her and would do anything he asked her to do, even if it was far beyond what might be expected of a green colt.

He had watched his Dad and I both lay horses down by picking up a front foot, so he had her where he could lay her down instantly. She absolutely trusted him, no matter what. I’m sure he did things with her that would have turned my hair white had I known, but he never got in a wreck.

I’ll tell more stories of a boy and his filly in time, but this was the beginning of the best gift I ever gave my son. She’s still going at past 20, though the miles and years are starting to show. It’s still a love affair between them. She’s precious to me too, as she took care of my boy through thick and thin.