My husband and I were working for an outfit in Wyoming years ago. The crew was gathered up to get some cows and calves gleaned out of thick timber, both oak and brush thickets and pines. In the crew was the owners’ daughter, son-in-law and their two young kids. The folks were good hands and the kids were cute, but not big enough to be much help, so we were set.

For a reason that puzzled me at the time, I was paired off with the very small boy, probably six or so, to gather a long canyon choked full of trees and brush. I wasn’t a kid person and this particular kid was darned cute, but badly spoiled. I’ve suspected since that no one else wanted to be paired with the little booger so I got the short straw, so to speak.

Not thrilled, because besides looking for hiding cows, I had to keep track of the little stinker following me through the trails in the trees. He was downright obnoxious. He was, however, on an exceptionally fine old gelding who we will call Scooter. Scooter was a big horse, 16 hands or so, and made it a challenge for the little boy, who we will call Danny, to ride through the low branches.

I had suggested he hang back a little so the tree limbs wouldn’t slap him, but of course, he knew everything and instead of hanging back, kept up a constant stream of complaining as the branches kept slapping him. Scooter kept his head low and avoided the branches well. The complaining from Danny got louder and, surprisingly, more abusive toward me as we went along. No doubt that’s why my sympathy for his plight might have been waning. This kid was, at that time, qualified to be a poster child advocating not having kids.

Brush was rustling and I knew there were cows in those thickets, so I was really watching them closely, trying to see any fat black cows and big Charolais cross calves through the brush. I was focused pretty hard on that, plus dodging limbs on my tall horse, with Danny’s continuous yapping behind me, which I was trying hard to tune out.

I was looking hard for cattle when it finally registered with me that Danny’s whining had changed in pitch and and volume. I looked back and saw Scooter’s head right behind me, but no little kid. I spied Danny about 30 feet behind me, caught under the armpits by a forked branch. When he saw me looking at him, his vitriol increased and he was plumb nasty.

Turning my horse, I got Scooter turned and led back to him. I sat there and looked at him while he spouted off. My lack of concern must have finally registered with him because he ran down and stopped talking at last. He finally asked if I would help him back on his horse. Lord help me, I really wanted to just leave him there. Finally, I told him I’d get him down if he promised to stop talking and complaining. His mad had turned to near tears by now, so he agreed.

I sidled Scooter up next to him, plucked him out of the tree and put him back in his saddle. When he was settled back on his horse, I looked him right in the eye and told him that if he didn’t do as he promised, I was going to personally put him back in a tree and leave him there until I had that canyon gathered.

He nodded and said he’d be quiet. I must have looked quite sincere. So, we started off again and finally got the cattle pushed to the open side of the canyon and started back with them. Other riders soon joined the drive, including the parents of the little hellion on Scooter. They asked him how he was doing and he answered with a single “fine”.

I don’t know if he ever told his folks of the incident, but I never heard about it if he did. They remained friends, and surprisingly, Danny grew up to be a nice person. Would I have left him in a tree? I don’t know. It’s well that he didn’t test me. 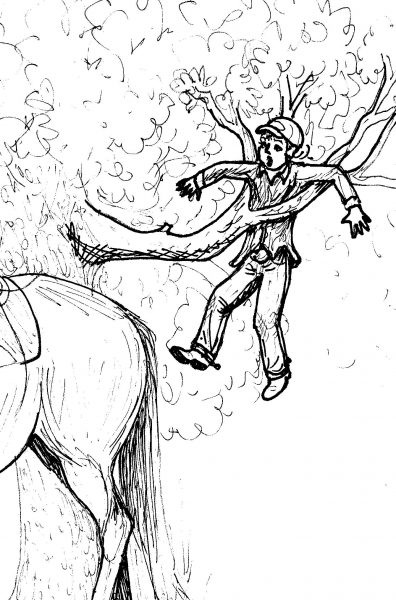