The Last Roundup for Dick

My ongoing dilemma of working for Dick because I needed the paychecks didn’t end when the nice registered cows were hauled away. I had decided I was done with his nonsense, but he called and begged, so I helped him with his commercial cows. I don’t know where he’d had them running, as I’d never had any dealings with them, but he had some cows that he’d bought the spring before. He had been running them with someone else and had to move them, so he’d hauled them to the pasture where the registered cows had been running. It was in late October when he put them there and had me help him pre-condition their calves after they’d been there a few days. They gathered pretty well, and as usual, I fed them a little cake in the rickety corrals after I had them in. The corrals remained standing through the sorting and vaccinating of the calves, then we turned them all back out into the pasture. I told him that day that he needed to get them home, that that country was no place to be running cows so late in the season. He told me they’d be fine. I’d lived through some years and fall storms in that area, so it sure concerned me. I tried to not be, but I cared about the cows.
Sure enough, November 6th the weather man laid out the predicted path and power of a winter storm that was coming in. It was building up and would be arriving in the coming 36-48 hours. The area where Dick’s cows were was right in the eye of the storm. My guts got a knot in them. We tucked our stock in the next day and got them prepped for the storm. I kept thinking about those
poor cows and calves up there in that pasture with no shelter, deep draws or anything. I kept an eye on the weather, and the storm was building to have feet of snow and high winds before it was over. I was sure glad our cattle and horses were in a safe place with feed and water. I kept wishing Dick’s cows were home too.
The night of the 7th it was sleeting a bit as it got dark. The phone rang and when I answered it it was Dick. Suddenly, he was concerned about his cows! I’d had a knot in my guts about them for days and told him that. He asked if I could get my husband to help and if we could trail the cows down to a set of corrals along a county road where a truck could load them out at. There’d been enough moisture that there was no way for a semi to get in to where the cows were. Naturally, Dick wasn’t going to help.
I conferred with my husband and son, who was about 9 years old, and they said they’d help me. I told Dick we’d head up there at daylight if it was possible to make it at all. I told him that it was going to cost him a lot for this as he’d had plenty of nice days to get them out, plus it was both my husband’s and my birthday on the 8th. Heck of a way to celebrate a birthday, gathering, trailing and loading cows in a snowstorm 80 miles from home.
We rolled out before daylight, chored at our place, loaded our horses up and headed north to Dick’s pasture 80 plus miles away. It was foggy, sleeting and snowing all the way. It got worse as we went north, and was really laying down the snow by the time we unloaded our horses and started out for the pasture. Thankfully the wind hadn’t hit yet. We trotted our horses up the trail road and when we got to the gate into the pasture I started calling the cows. I’d called them a little when caking them in the corral that time, so hoped they’d remember and start moving toward us.
The guys had never been in the pasture and the visibility was about 25 yards at most, so I had them go around along the fence on the east side and I’d go on the west side and we’d meet on the north fenceline. I sure hoped we’d find the cows and each other again. I called a few more times by the corrals, then headed out. I was about halfway to the north end when I heard a cow bawl off to the east of me. I went on to our meeting point and in a few minutes the guys arrived. I told them I’d heard cows bawling and they had too, so we cut toward the middle of the pasture where I thought I’d heard them at. Pretty soon we caught up with cows and calves walking south toward the corrals. 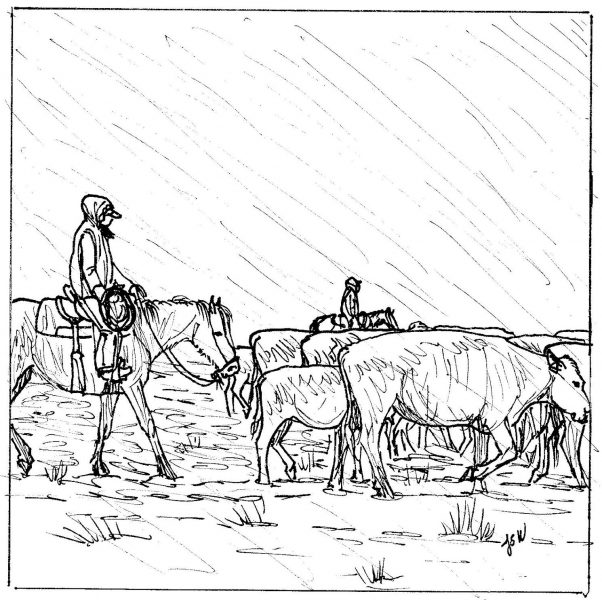 Once at the corrals we got a good count and they were all there. I opened the gate and rode out ahead of them, calling every little bit. They strung out behind me like they’d done it their whole lives, and the guys brought up the drags. The snow was really coming down and the wind had started to pick up a little as we slogged through the mud and snow toward the county road. Several times when I looked back I couldn’t see the guys at the back of the bunch. Finally the pens came into sight and we got them locked up. The truck hadn’t gotten there yet as the roads were bad and it was slow going. We rode over and loaded our horses in the trailer out of the wind.

We were glad to get in the pickup and broke out our thermos for a hot cup of coffee. About then Dick came slogging over, having seen that the cows were in. I’d seen his pickup was there but hadn’t had any inclination to talk to him until I had to. He told me that his wife was with him and had even baked us a birthday cake! He invited us to come and sit with them in there outfit and have some cake. We went with him and I made the introductions as my husband and son had never met Dick. I’d never met Dick’s wife. So, sitting there in their crew cab pickup, Mrs. Dick put a big candle on the cake and lit it. What a nice lady! She cut the cake and we all enjoyed several pieces while we waited for the truck. Mrs. Dick was a gracious hostess and Dick sure behaved himself with both his wife and my husband and son there.
The truck finally got there and by the time he got backed up to the chute we had the cows and calves separated and ready to load. They really wanted on that truck! I suspect they’d have loaded out in the open with just the chute. They were sure ready to go home.
Dick handed me a sizable check, written by his lovely wife, and we got loaded up and followed the truck and Dick out of there. It was a long, slow trip with the roads and visibility so bad, and we were really glad to get home, put our horses up in the barn, and go to the house.
That night when the big wind and heavy snow hit, I rested easy, knowing that those cows were home and not dying in the storm in that barren pasture. I also knew that I wouldn’t be working for Dick ever again. His wife had mentioned something about not knowing I was a young woman. I’ll just bet he’d never mentioned that to her. So, that was also a relief to me, as you might imagine.