The spring of 1981 I was working for and living with an elderly couple in the middle of nowhere, calving a big bunch of heifers and mother cows. They couldn’t do the outside work anymore, but had a neighbor who managed the place for them. He lived miles away and had thoughtfully brought all of his heifers over for me to calve as well. Plus I was doing most of the riding, checking cows, pairing out and riding on the pairs. I was busy.

This manager kept some horses at the ranch for when he needed one. One was a good looking dark chestnut gelding who he was trying to ride into a semblance of civility. This gelding was a three year old but had a bad attitude and was a snakey, waspy, treacherous, untrustworthy, mean little booger. I don’t know how he’d gotten tapped off crooked with the world, but he sure had. He’s strike, kick and buck, plus was danged hard to get on. I was sure glad he wasn’t in my string as I found him rather tiresome and knew the manager did too. He was a good cowboy and could ride him, but it wasn’t getting any better in spite of the miles.

One of my many jobs, besides calving all the heifers and cows, milking the manager’s milk cows, nursing his calves on his nurse cow, and anything else he could think of for me to do, was to saddle that nasty little gelding on the days he was going to be used. I was fed up with it as it was a difficult job, but he was the boss so I saddled his horse. Where I came from you saddled your own horses, but that’s beside the point.

On the day in question, I’d had a heck of a time catching the colt called Charlie. I led him into the saddle room, which was a big open pen in the main barn. I brushed Charlie off well, watching him like a hawk as he swatted at the brush on both sides, but I got him ready to saddle, put the saddle blanket on him, and when I turned back to get the saddle off the rack, Charlie reached up with a hind foot and cow kicked me right below the shoulder blades. He didn’t get a good whack on me so I stayed on my feet. However, that was the straw that broke the camel’s back for me. 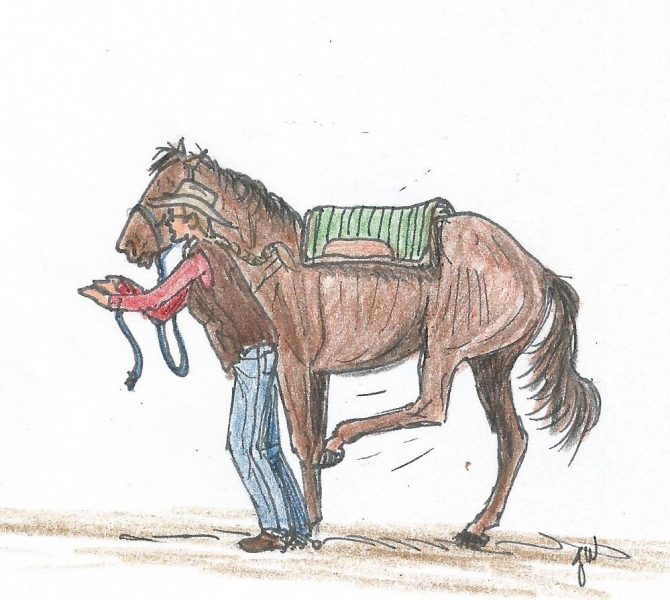 Instantly I was in a blind rage. I was tired, worn out from no sleep, frustrated, overworked and sick of that evil colt, so I blew my stack. I grabbed Charlie by the cheek of the halter and went to pounding his belly with the side of my booted foot. I was kicking him as fast and often as I could with all the force in my young legs. He was so surprised that he ran backwards across the pen, but with all the adrenaline flowing, I never missed a stride and kept kicking his belly. He was half squatting in the corner when I got him one last time.

Charlie’s eyes were huge and bugged out. He was breathing hard, working his mouth and dribbling a little pee, totally in submission. I was gasping for breath and we stared at one another for a minute while I cooled off. Then I led a very meek Charlie back over to the saddle rack, put the blanket back on him without him having to kick at it, and finished saddling him. He never even humped up. He watched me closely though, and led like a gentleman out the door and into an outside pen where I tied him up. I tightened the cinch a little more and walked away, Charlie still staring at me with astonishment.

I’m not going to tell you that Charlie was a new horse and that he changed his ways. For the manager he got worse and worse, sometimes even needing snubbed so he could get on him and get the first half mile under his belt. But, for me, Charlie was a watchful gentleman to saddle. I never trusted him an inch, but he never again tried to do me harm. He was even easier to catch as he’d face me when I cornered him up, unlike before.

The horse whisperers would faint dead away at my method, but, it worked. I’m not saying it was the right thing to do, but the results were good. Charlie was easy to saddle but still hard to ride. At least my part of the job was vastly improved.