I dropped everything on Wednesday May 5th, to take our 18 year old ranch stallion, Poco Tivio Pep (Chachi) to the vet. He couldn’t breathe. Fluid was running from his nose like water from a spout. By Tuesday evening, it was obvious he struggled to breath and realized we might be dealing with heaves. After dosing him with Banamine and Dexamethasone, I figured I’d find him better that next morning – instead we found him worse. He was diagnosed that afternoon, after making the three-hour long trailer road trip to Sturgis, with Equine Multinodular Pulmonary Fibrosis. A rare and almost always fatal condition, only first discovered in 2007.

Not Just a Horse

He wasn’t just a horse. He was part of the family. Bred by Bob Miller from Beggs, Oklahoma, he was sort of an unplanned, random purchase as a yearling. We had been looking for an outcross stallion and had found a Poco Bueno grandson in Arkansas. So on the way home from picking up Silver Bueno Tom, the crew stopped in to see Zach’s friend, Bob.  Zach reminisces:

“Bob, like every other horse breeder I’ve ever known, had an abundance of horses, generosity, and belief in what he was raising. He’d just told me about how these yearlings were all for sale, and that he’d take payment after we sold our calves in the Fall; and I could have my pick.

About then, a solid bay, low-on-the-totem-pole, pivoted and pirouetted through the herd; doing a 360 spin, while moving through the herd of tough guys. Odds are, Bob was right in the middle of telling me his pedigree, and I just pointed and said, ‘we’ll take HIM’”!

He was one of the best teachers we could have ever hoped to have here at the ranch. I asked the crew for their memories of him, and it wasn’t surprising what the resounding theme was: He would babysit anyone, at any time, at any level of ability.

Melissa, one of our ranch interns, who now works here full-time, was so timid when she got here, she would barely ride a trot – she recalls:

“He was my teacher, who packed me around for hours while I found confidence in my riding abilities.

He was the first horse I learned to rope off of and drag calves on (with the help of human friends). He taught me how to trust.

My favorite memory of him was the day we had our first of many gallops together. We walked out to the alfalfa field, I sat my butt down, let out a smooch, and away we went. I didn’t think I was ready, and I was scared out of my mind. But he knew it. He knew I was ready. He knew it was time for me to let him be my partner.

After coming to our first stop, I couldn’t help but break down, in tears of joy and relief. I’d done it. I’d finally been able to feel comfortable on the back of a 1200 pound animal to where we were just…together.

I did it. Correction. WE did it.

There is no easy way to say goodbye to my teacher, my friend, my pal, but to know he’s in greener pastures gives me some peace of mind.

You are one of my hardest, see-you-laters.

Chachi, I will see you again.”

The Legacy will Continue

We’re so fortunate to have several of his daughters in our broodmare band, and a son of his as his replacement, though there really isn’t a replacement for him — he was solid as a fence post, unwavering in his ability to teach the rider to ask for what they wanted and to believe they could do it. The first stallion many folks had ever ridden or would ever ride was Chachi. Everyone who threw a leg over him fell in love. He would take care of the greenest rider, regardless of the setting. If someone were riding a mare, and came up next to him, he’d ignore her.  And when someone experienced got on him and had a job to do, he was ALL business!

A really handy friend of ours came to the ranch and we ended up going to help the neighbor while he was here.

“I remember riding him one time helping Kenny. The cows made a break in the wrong direction. I kissed to Chachi and we headed towards the front of the herd! I was focused on the cattle and not really watching where he was stepping. I felt the slightest change in his rhythm, nearly unnoticeable, and when I looked back to see what it was about, he had jumped over a big ball of wire laying out in the pasture that I hadn’t noticed. He never missed a beat, wide open and so smooth he never took his mind off catchin’ the cattle! He was a true testament to everything about the entire DX crew!”

For every ride I ever had on him, I’m grateful. Naturally elevated and incredible to ride, he was always my choice if I just wanted to phone in a ride, while chasing cows. In the branding pen you’d feel right at home astride him. Always correct, his feet were dependably in the right place. He gave his colts the same elevation, the foot placement and the same laid-back, NOTHING is a big deal, attitude.

In 2019, I was fortunate enough to start one of his daughters at Art of the Cowgirl. She was, in true Chachi-get form, a testament to what he added to our breeding program – quiet confidence. It was the filly’s first trip to town but you’d have never known it. By day two I was loping around in the round pen. She never offered to buck or be, in any way, disagreeable. That was Chachi; those were his colts. He left his mark, indelibly in our herd, even though he left us too soon. That same year in February, shortly after Art of the Cowgirl, he was on the digital cover of America’s Horse. As a photographer, one of my proudest moments to be sure! I’m currently competing on a daughter of his and she’s proving to be just as agreeable and just as amazing as he was. That’s no surprise. 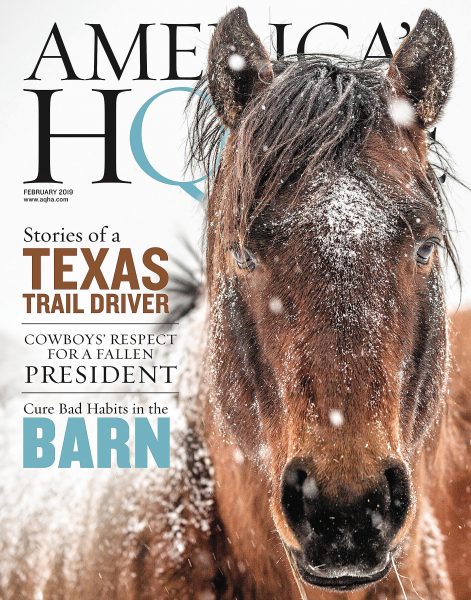 When Zach called me the morning of the 11th, to let me know he was gone, I lost it. I had stayed two extra days in Rapid City, after the barrel race let out, to bring him home, thinking we could possibly treat him for this disease and give him one last hurrah with his girls – I mean, that way he’d at least die happy!  Instead, I brought back a bag of tail hair.

Chachi wasn’t raised here – that was his only shortcoming. He was everything the late Wayne Ducheneaux set out to accomplish with his breeding program. We were incredibly fortunate that we got to see him grow, produce, teach, babysit, and have a lifetime here.

Thanks for spending some time with us pardner. We miss you.