Since I really had nothing better to do for the eight hours I was chained to a phone in a ten by ten foot cubicle, I sat on my butt staring at the floor, admiring the fancy stitching on my boots. I began questioning what in the world possessed me to purchase such a flamboyant and useless pair of shoes. Two hundred dollars (well, actually more, but my husband might read this, so I will round down…) for a pair of boots that can’t be worn in the barn? (They could, but then I would have to do several Hail Mary’s and go through confession at church, so it probably isn’t worth it).The pragmatic part of my brain wonders what I was thinking, but the creative, stylish part of my brain defends the impracticality of the shoes. Boots are as much of a fashion statement as they are protection for your feet. And who doesn’t like to wear shoes that make you feel pretty and classy? If city girls can spend that kind of money on a pair of high heels for no reason other than to make their butts look good, then I sure as heck can spend mine on some snazzy cowgirl boots. Damn right. I am kind of a bad ass like that sometimes. 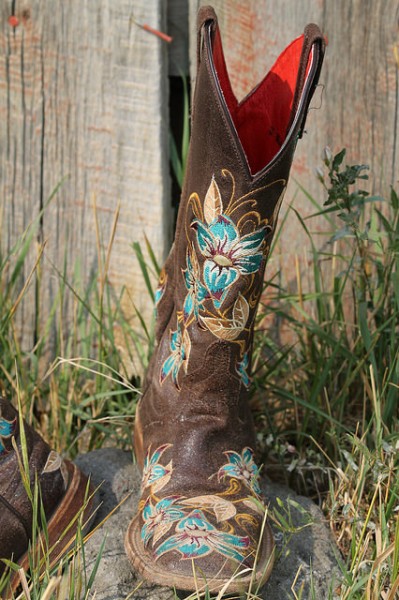 I have to admit that these boots with the embroidered flowers were not my first choice when I entered the local western wear store. But it was time for a change; I wanted something I could wear to work, that would look nice with slacks but that would look cute with jeans. Being the totally unstylish tomboy that I am, I tried on several pairs of plain brown boots and realized that wasn’t what I was after. I already had a pair of plain brown Fat Baby’s, and to tell the truth, they just didn’t fit like they used to. So the choice was narrowed down between a really fancy pair of really expensive boots, and these glittery, embroidered ones. I admit that when it comes to glitter and bling, I usually leave it for “girly” girls. But for some reason, these pretty boots spoke to me. They said, “Try us on! Buy me, buy me!” (Ok, they obviously didn’t say that….) I wasn’t really sure that I didn’t look like a total idiot, so I asked my friend who worked at the store for her opinion. Did they look okay with slacks? Would they go with a dress? “Yes, of course!” she said, like the great little sales lady that she is. I dug out my wallet, and bought those suckers like I didn’t own another pair of shoes at all; giving her the satisfaction of selling another pair of boots to me and myself a nice little present. 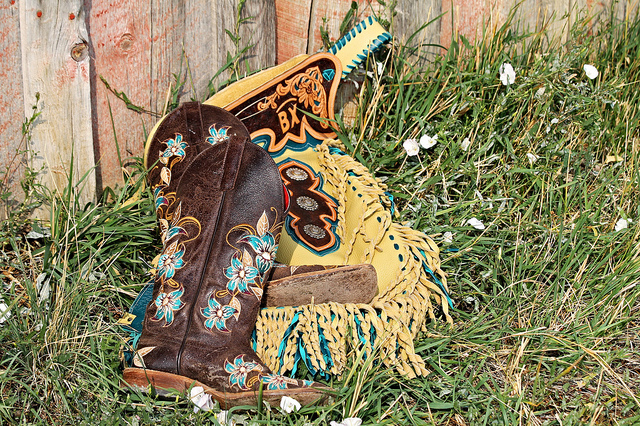 The fact that the boots and the chinks match is purely coincidental. Although turquoise is my favorite color. And my ma is pretty freaking talented.

Thankfully they are fairly comfortable. I managed to wear them for four days in Las Vegas, while taking in the NFR. I wear them to work quite often, and they are my go-to shoes for church and weddings. They may not be the most practical shoes ever, but they sure are cute. And really, what cowgirl doesn’t like that?  They also match my chinks really well; so when the day comes that these fancy boots get retired to the barn, at least I will be stylish in the saddle too. I would imagine it won’t be too long before I find another pair of boots to add to my collection, and these get promoted to the barn.  Honestly, I would wear boots every day if I had enough pairs. I wore them when I got married, got a pair as an anniversary gift, and will probably be buried with a pair on my feet. No matter what color, what style, or how much they cost, good boots just feel like home. 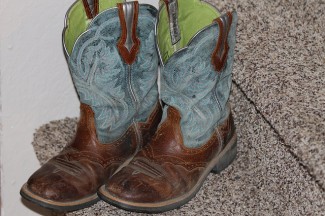 Until next time, happy trails in your fancy (or un-fancy) boots! ~Richelle

Richelle is a part time rancher, home office manager, full time wife, mother, and Customer Service Rep at the local telephone cooperative. She was born, raised, and lives on her parent's ranch in the North- Central part of Montana; and spends most days...

View all posts by Richelle Barrett