The Element of Surprise

Having owned and doctored lots of horses over the years, I’ve developed a pretty fair file of practical vet experiences. A lady I knew some years ago had good horses, knew how to ride them well, and she made a good living starting young horses and riding for a feedlot. Due to lots of irons in the fire, kids in school, her husband’s dislike of horses, and general farm income, vet visits were avoided like the plague. I was called on to look at something or doctor something on occasion, and as I liked them a lot and I usually got a bunch of fresh eggs, I was willing to help them when I could.
The gal’s name was Karen. She called me one morning and said that her good young mare had a stick driven into her leg and asked if I could come and look at it and maybe remove it. I knew the mare and knew she was a little watchy but not mean. I grabbed a few things I might need if it looked like something I could handle, and headed her way. She had the mare caught and standing in the yard when I arrived. Sure enough, there was a jagged piece of old board shoved down under her forearm hide, and poking through the skin on the outside of her right knee. It was ugly. The mare was really nervous about it, and Karen’s near panic wasn’t calming the situation any. 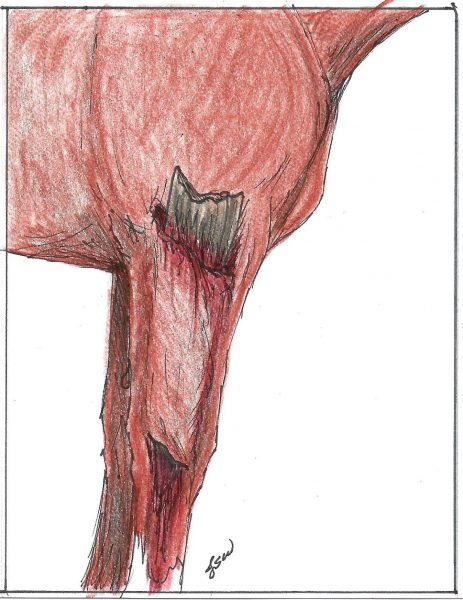 I suggested running some cold water over it and getting the blood and dirt soaked off so I could examine it, and in doing so, relieving some of the pain for the mare. The mare fidgeted around for a bit but then realized that water felt pretty good. Karen was able to wash off the debris and then I took a good look. The stick was pushed through against the grain, such as it was on that old board, with the pointy end toward the ground. The water running from above it and down through the wound was smoothing that grain down again, making the tapered stick smooth and slippery.
My back was bothering me for a change, so I sat on a lick barrel while Karen ran water on the leg. Every little bit I’d get up, pet the mare a bit, bend down, and look at the stick. Each time, the mare and Karen got more calm and used to my movement. I knew if I told Karen what and when I was going to do something, she would telegraph that to the mare and we’d have the potential for a wreck. Since I was determined not to get injured and didn’t want either of them to be either, I kept doing the old “take another look” routine.
In my back pocket, I had a pair of pliers I had brought along in my vet box. They were good pliers with some grip on the face and big grippy handles. While Karen was looking off at something, I pulled them out of my pocket and had them in my hand. We kept visiting, she kept petting on the mare, both of them completely relaxed, while the cold water ran on the leg. I stood up to take another of many looks at the legs, petted the mare, bent down and before Karen could register what I was doing, I took hold of that piece of wood with those pliers and quickly pulled it out. I had it out by the time the mare even flinched. Karen was astonished, as was the mare I’m sure, and they both just stood there looking at me. I examined the piece of wood, which tapered from one to almost three inches wide, around 14 inches long and an inch thick. It didn’t have so much as a sliver missing on it. The old gray wood was gray all over, which is what I had hoped it would be. I had Karen run some more water through the wound, then I pressed the water out and filled it with an anti-microbial/anti-bacterial lotion that we used on everything from babies to horses and cattle.
The mare was stiff for a few days, drained a little, then healed up without an issue. Karen brought up the “element of surprise” incident many times in the ensuing years. I don’t remember the mare ever mentioning it again. Oh, and I got about six dozen eggs out of the deal, plus a good visit.