The Dun and the Grey

Who could have ever predicted that we would see the impacts of COVID-19 in our lifetime?  It has affected our social lives, financial security, food securities, educational systems, and our family life.  For my family and many other ranching families, we choose to try to find the blessings from within.  In particular, both of our kids are home from college filling in with night checks and other calving duties.  Most recently, they decided to have a little competition to get two more colts going in anticipation for branding days.  The following poem is a little ditty I put together to recount how it is progressing thus far.  I hope you enjoy and can get a little chuckle at their expense; we certainly have been! 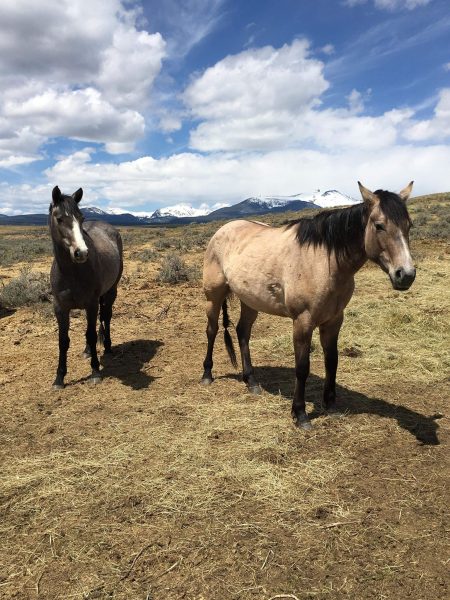 This is a story of the tortoise and the hare
with a couple of twists, and maybe should have had more flare!
The animals of this tale are not a rabbit and turtle,
but a dun and a grey with a competition to be the hurdle.
The race was to begin in the 60 foot round pen,
possibly gauged by style from a one to a ten.
As day two ensued, the judges could see,
that the gates were cracked open maybe a bit prematurely.
Things seemed to be going fairly well,
each rider proclaiming theirs was the most brilliant and would certainly top a sale.
The gray spent a couple of days seeing a lot of action,
kicking out pairs and being the main attraction.
The dun would wait patiently until nearly the end of the day,
her cowboy would come gather her from her pile of hay.
Off they would go at a slow, gathered trot,
not always the fastest but still seeing a lot.
At this point the judges expressed some concern,
maybe the gray had an advantage getting to go out where there’s so much to learn.
Then it came, the fourth and fateful day,
the gray threw down her cards and left them to lay.
You have to understand that although it was Spring in the valley,
four foot piles of snow would still fill the alley.
Turning to head up into the lot to bring down the heifer
that was currently sought,
a toe brushed through a pile of snow,
and with that the gray threw her head down low.
With a couple of squeals, she found her wheels.
Should she run, should she buck?
She chose to do both with quite a bit of luck.
After a quick stride or two, she grabbed her ass,
and finally was accomplished in throwing down the fine lass.
Now, I must say, as I saw the lass lay,
had it been a competition of endurance, she’d have been the one to pay.
And so on this day, the dun and the gray,
one’s back to the round pen and one’s pulled from her pile of hay.

I am a self-proclaimed jack of all trades, master of none, (but oftentimes better than a master of one). Growing up with a ranching and ag background prepared me for the life my husband of nearly 23 years and I have built together. ...

View all posts by Mykal Kirkpatrick