The Disposition Line of Horses 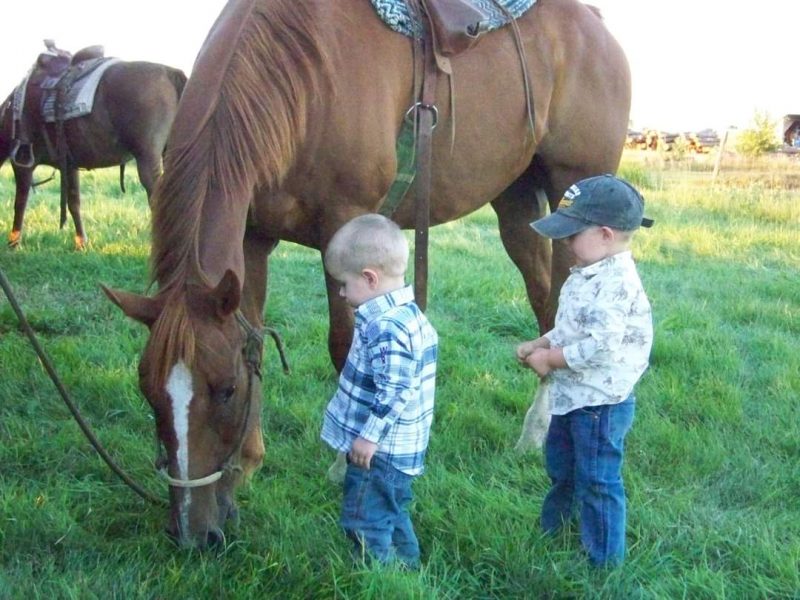 My Lily mare who was my top horse for nearly 20 years, was an outstanding individual as a saddle horse, had speed galore (came off the track), stayed broke, had lots of eye appeal and all that good stuff. But, for me, her best characteristic was her sweet and people loving disposition. She also loved baby critters like calves, puppies, kittens, and even kids. She’d never seen a kid before, I’m sure, but when my son was a baby, she was just bonkers over him. As he grew, she claimed him as her own kid I think.

I raised some colts out of that good mare. When she had the first one, I didn’t know how she’d be so I was pretty cautious when I took my then five year old son to see the new filly out in the corral. I explained to him that she might be protective of her baby so we’d stay back while he looked at it. Lily wouldn’t have it! She nickered at Colin, left her filly to come to him, nuzzle him and then lead him back to her foal. When she had them together she sighed with relief. He spent the summer napping with that foal out in the pasture, Lily standing over the two of them. That filly was Josie.

Her son, Rush, is my pet saddle horse. I had to sell him when he was two and, thankfully, got him bought back when he was past 10. To my knowledge, he’d never seen a toddler sized child up close in his life. His first sighting of my oldest grandson, who was about 18 months old at the time, was fun to watch. He hung his head over the corral fence and reached as far as he could to sniff that tiny person. He couldn’t get enough of him. He was fascinated.

Following that introduction, tiny person pictures with Carson and Taygen on him were a frequent thing and I gave them each rides on Rush every chance I got. He was always so careful around them, just like his mother had been.

When they were almost four and just past two years old, I had taken Rush along, with their little saddle on his huge back, to a roping their Dad was competing in. It was an easy way to keep track of them, keep them safe, and they were up where they could see well when on him.

They were picking grass and feeding it to Rush while Rush grazed by the trailer, halter rope dragging. He’d politely take what they offered and continue grazing. It was particularly fine green grass. Both little boys were standing right by his head, side by side. They liked petting him too and he liked being petted.

Suddenly, overcome with affection for Rush, Carson, the bigger boy, threw his arms around Rush’s head and hugged him hard. Rush paused his grazing but didn’t move his head. While Carson had him in a headlock, Taygen spied Rush’s left eyeball below Carson’s arm. He touched it rather firmly, maybe even a poke, before I could stop him. Unbelievably, Rush didn’t raise his head, even though his eye was instantly watering and it had certainly startled him. He held his position while Carson finished his hug, kissed his neck right behind the ear, and then stepped back. Only then did that big gentleman raise his head, eye watering, though undamaged.

That horse line, of which I still have the first filly, Josie, and Rush, have been amazing horses. Josie was born to be a kid horse and finally got that promotion when Carson was about six or so. Her advanced age is all that kept her in that job, but she had prepared Carson to step up to one of his Dad’s good horses and she was retired. Taygen “stole” Rush from me when he was about six and his old mare quit her job by bucking him off while working cattle. Saddle, bridle and kid were transferred to Rush and they’ve been a team ever since. He’s a big, powerful, fast, “big engine” horse, but he takes good care of his boy. It’s a pretty fine job for a trusted partner who is now getting older.

I feel I’ve been truly blessed with this horse line. Disposition is so important and the other two mares of this line are grand broodmares, raising more good dispositioned horses. In my opinion, disposition is the most important feature in a horse and the Lily line sure has that.