I get a kick out of a horse with a humorous personality. They keep life interesting and keeps one on their toes. I had one named Kelly that had the most creative mind and cleverness I ever knew. I got him as a long three year old and put him down at almost 29 years. We had quite a cowboying career together, and it was never dull.
Kelly could unlatch, untie, unbuckle, undo anything he could get his lips on. Gates that took five minutes to open because of all the safeties could be opened at a slow walk by him. If he was tied up and he could reach the knot, he untied it. I never bothered to tie him up most of the time. He’d just untie himself anyway. At many brandings I’d hobble him on some good grass and leave him far away from other horses, hoping he’d stay busy grazing. It sometimes worked. If he got done, unbuckled his hobbles and went on a walkabout, it was a mess. He’d untie all of the horses he found. Most of them were tied up for a good reason. He untied a slicker and pulled it off of someone’s saddle at one branding and spooked the other horses off by swinging it around. Thankfully he’d already untied them so they didn’t break any reins or hurt their mouths. He’d undo rope straps and drop ropes on the ground. Wire pliers in cases were removed and dropped. Needless to say, he was not a big hit with everyone, nor did they appreciate his sense of humor.
My Dad rode for years with a tackaberry rig on his latigo. He rode a single rig saddle. Kelly unsaddled Dad’s horse when he and Fox were left in a pen together while we worked some stock in the chute. He’s also removed his hammer from the case and untied his slicker. Dad wasn’t amused. Kelly also enjoyed opening gates. He was so adept that the safeties were engineering masterpieces on every gate latch. But, if he could reach it, he could open it. He never left, but usually whatever else was in the pen did.
I would picket Kelly out so he could utilize the grass around the place that otherwise would go to waste. I had a cuff for his front foot and snapped a long picket rope onto it with a swivel bull snap. Kelly would graze contentedly for a while. Then he’d turn himself loose and find me. He’d do one of three things: untie the picket rope from the post or stake, unbuckle the bull snap (yes, I know, they’re tough but he could undo them), or he’d remove his cuff by unbuckling it. Keeping him on a picket rope became quite a game between us. Again, he never left, just came looking for me with his keen nose to the ground. He’d find me in the garden, working in the corrals, or even in the house and be peering in the window at me. He never opened the door and came in, which surprised me. He could have, he just didn’t. 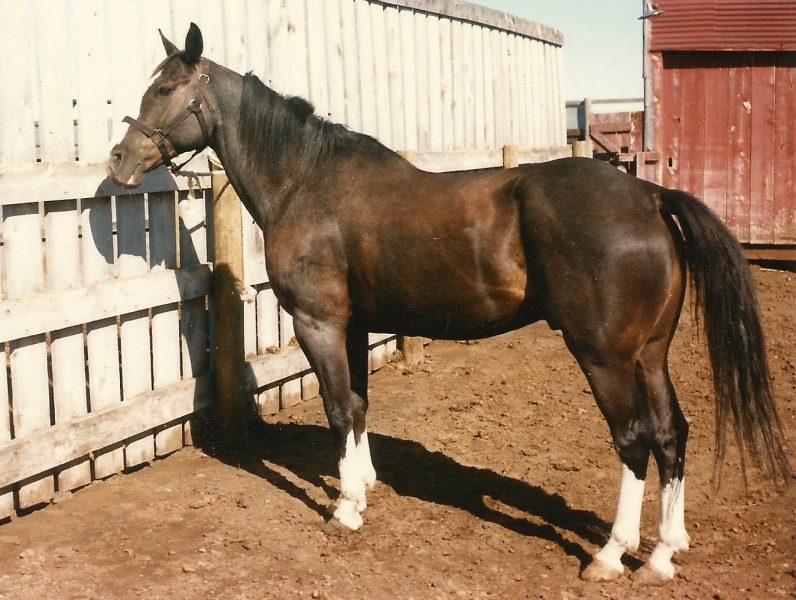 Kelly, tied briefly for a photograph.

He was so smart and clever. Thankfully, he put that mind and determination into his job as a saddle horse too. He could pull harder from the horn than anything I ever rode, even if I stepped off to help from the ground in the case of dragging something into a trailer. He’d hunt cattle with his nose like a hound. His nose to the ground, he’d trail them. I could ride a whole pasture and never see so much as a bush wiggle, but he’d find the cattle and root them out of where they were hiding
If a bull or cow turned to fight, Kelly would present his broad chest to them. When they’d hit him, he’d crouch down lower and lower until he had them mashed on the ground. Then when they backed out from under him, he’d grab them, usually by the top of the head, and peel the hide off with his teeth. Most didn’t care for that and put distance between us.
I’ll admit, I did get frustrated with his antics at times, but he was just so darned good when I rode him that I could overlook them. He was worth his weight in gold and had more try and guts than anything I’ve ever ridden. He’s been gone for many years now, but I’d sure take another one just like him even with his antics. Those like him are few and far between.