I had a really good mare years ago who had been a stellar saddle horse and always sound. When she was past her mid-teens, I decided that she had earned the right to raise some colts. I found an equally good stud to breed her to and hauled her to the ranch and turned her with his mare band for several years.

Cody was the boss mare wherever she was. Whether in the home bunch of horses or in the stud’s mare band, Cody was in charge. She wasn’t a bully in any way but a true lead mare that watched over the other horses and didn’t tolerate nonsense in the bunch.

She was also a good mama and took good care of her foals. Unfortunately, she also let them be pushy toward her and pretty ornery, and if the foal started something with another horse, she was quick to put the other horse in place if they threatened her foal. Lots of mares do that with their babies.

However, Cody didn’t ever stop. When her first foal, a filly I called Sealy, was a baby, she figured out that she could bully the other foals and even the mares and that her mama would bail her fanny out of a jam. It made Sealy a terror for the other horses and a challenge for me.

As Sealy grew, she didn’t change. As a yearling and a two year old, she would build to any mare in the bunch and could put the run on them because they knew Cody would back her up. It concerned me, but I didn’t really have anywhere else to put her at that time.

When Sealy was two, she was as big as many of the other mature horses, so had some muscle to back up her attitude. She was also overbearing and challenged me regularly, but strict discipline that she understood kept her from getting the upper hand with me.

I went to riding her steady the fall she was a three year old, but her attitude didn’t improve. She was still the tough bully with the other horses and it was an ongoing problem with our working relationship. Obviously, by this time her mama wasn’t stepping in to defend her as Sealy was perfectly capable of holding her own with anything out there.

In all, Cody had four foals for me and they all had their mama’s tough backing as babies. None of the other three had the chance to run with her after weaning, so they all became pretty well mannered due to the discipline of other horses who hadn’t heard about how tough their mother was, and all respected and liked people, even the two that remained studs.

When Sealy was a mature horse and running with the mares, she was still a bully. I had bought an older mare off a big outfit who had run in big cavvies of horses, then the broodmare band itself, her whole life. This little roan mare was pretty easy going and got along fine with everyone else.

I was working around the corrals one day when Sealy came in for water. She came alone and was at the waterer drinking when the roan mare Powder came to the little water lot to drink. Powder never changed expression as she came through the gate, but Sealy sure did. Big eyed, Sealy hustled away from the waterer and stood quietly in a corner, trying to make her 1300 pounds smaller while Powder drank her fill. Powder then stood there and took a little rest. She never looked at Sealy, but I kinda figured that she was just holding Sealy off to teach her patience. When Powder left, Sealy waited for several minutes before leaving her corner and finishing her drink, looking often toward the gate where Powder had disappeared.

I’d like to have seen the showdown when Powder put the education on Sealy. It was sure gratifying to see the results. It didn’t dampen Sealy’s bullying of the other mares much, but she sure didn’t do it when Powder was anywhere close.

The moral of this story is, if you have an alpha mare, don’t run her offspring with her post weaning. She just might make bullies out of them by backing them up every time they start something with another horse. Herd dynamics are a big part of a young horse’s education, so don’t do anything that can foul that up. How they behave in the herd will also contribute to how they behave around you. 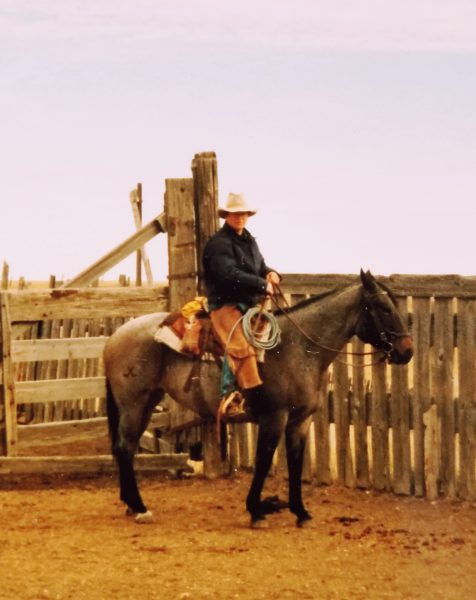