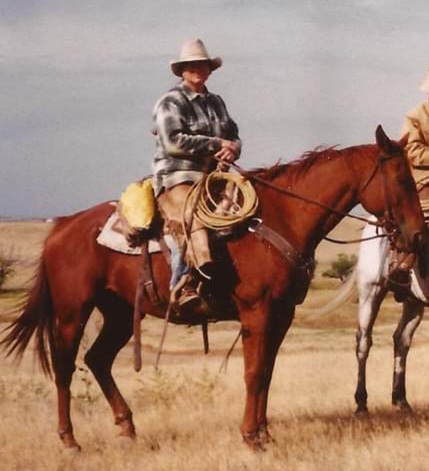 He was a royally bred AQHA gelding that was about 7/8 Thoroughbred and looked it. Taping at an even 17 hands, he was an imposing figure of horseflesh. We called him Easy.

I had traded for him from some friends. I had a mare they wanted and I needed a rideable gelding a lot more than an unstarted mare, so it was a good trade. The problem was, they’d had him for quite a while and couldn’t put any weight on him and he was skeleton thin. They had taken him to their local vet to have his teeth worked on, but it hadn’t changed his condition at all. But, with his size and breeding, I took the gamble, hoping I could figure out what was wrong.

First things first, I took him to our vet who specialized in equine dental work and he said it didn’t appear that the other vet had done anything. His mouth was a disaster and after a thorough workover, he was finally able to utilize the feed he was getting. He had about 300 pounds to put on to be right, so I fed him accordingly.

He was about six years old as I recall but had only had about 20 rides put on him as he was always thin. My thought was that it would be best to “ride him fat” and not let him get all shiney and then expect him to be a good citizen.

I let his mouth heal up for a little while and saddled him up. He saddled nice, took the snaffle well and enjoyed all the attention. When I stepped on him in the corral he rode right off, plow reined to turn and would stop. He was ready to go to the pasture.

My folks had yearling steers in a pasture next to their cows, and sure enough, they’d busted a gate stick and a bunch of them were mixed with the cows. Dad asked us if we could come out and sort them off since he was busy haying. That seemed like a good first ride for Easy and I.

Even as thin as he was, and I’ll tell you, I wouldn’t have ridden him along a road for fear of being accused of starving him, he was eager to move out and see some country. We warmed our horses up for a quarter mile or so, then long trotted and finally hit a lope. Boy, that big guy could really cover some ground.

We got to the cows and started sifting steers out of them as we rode through. We’d gotten all of them out and were almost to the gate when one of them decided that he was going back. We were at the top of a flat and there was a long slope down to the creek that was maybe ¾ mile, with draws, rocks and washouts. The creek itself was 20 feet wide there, would bog a snipe, and had a tall bank on the far side. And Mr. Steer, Easy and I were rapidly approaching it at the steer’s full speed.

I didn’t know if I had brakes at this speed, but I was sure impressed with how Easy was jumping the washouts and draws, negotiating rock piles, and keeping after that steer. When we got to the meadow, which was probably 30 yards to the creek, I asked Easy to go by that steer, hoping beyond hope that I wasn’t on a runaway without knowing it.

That big horse sizzled by the AAA steer and when the steer planted his feet, Easy, on his own, turned with him, nose to nose, and stopped the steer from getting behind him. I’d been screwed down pretty deep and the power in Easy still nearly had me hanging on his neck. But, I made the turns and got reset when Easy and the steer put on a cutting demonstration that would have made Poco Lena proud. The steer was totally overwhelmed and finally, tongue hanging out, remembered his friends back on the flat.

The steer was still trotty and I didn’t trust him to keep going, so we trotted along with him for a little ways. He finally dropped to a walk. After that magnificent run, cattle cutting, and all, when he got to drop to a walk, he took a couple of deep breaths and was done breathing hard.

I was sure impressed. He was all horse and had lungs and heart of high capacity, for sure. As I trailed the steer through the gate and added him to the bunch that were held there, I was awfully proud of my giant skeleton of a horse and couldn’t wait to see what he had when he actually was in condition.

He gained weight steadily being ridden and by the end of summer was absolutely magnificent. Over the next couple of years he finished in the bridle and was a sight to behold carrying himself “straight up”. I was sorry we didn’t have the riding for him as we had so many young ones coming on. A friend from California was out visiting and saw him and decided his life wouldn’t be complete without Easy and made us an offer we couldn’t refuse. Easy lived out his days in grand style, being ridden by a good horseman, in the land of milk and honey, and never thin again.