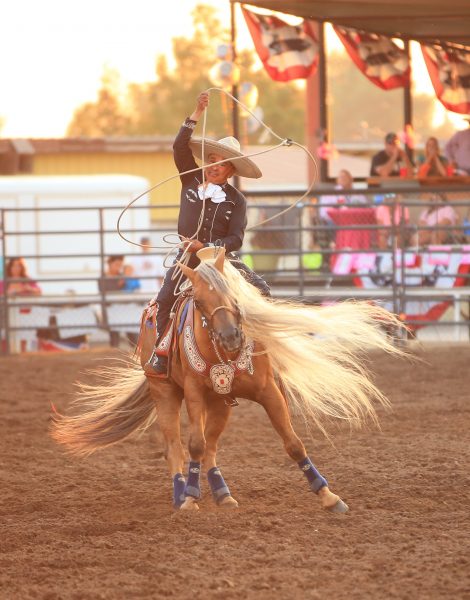 Tomas Garcilazo and his wife Justine and son Louis travel the nation as the specialty act at over 120 rodeo performances and equine events a year. Tomas does the La Charreria, the traditional art of Mexican cowboying, horsemanship and rope work.

But the real star of their show is Hollywood, their palomino stallion, whose registered name is Latigo Dun It.

The eighteen-year-old AQHA horse has his own Facebook page with 36,000 followers and gets star treatment outside of the arena, to prepare for a show.

Tomas’ wife Justine braids his mane every night, in order to keep it clean. She unbraids it before the show, and it’s so long it would touch the ground if it wasn’t so wavy.

Tomas bought the horse as a four-year-old, and in the arena, Hollywood does sliding stops, spins, turns, reining, side passes, all in Mexican style, choreographed to music. Tomas makes it look effortless, betraying how much time he has put into his life’s work.

He also ropes on Hollywood, doing the Texas Skip and the wedding ring, as seventy feet of rope spins around him and Hollywood as they walk around the arena.

Outside the arena, it’s Justine who braids and unbraids his mane. She uses detangler onit, and jokes that the horse has better hair than she does. She was born in France and did dressage, jumping, and got involved with Andalusians before meeting Tomas at a horse show in her home country. Little girls always like to braid hair on their Barbie dolls, “and now I have the real Barbie doll,” she said, referring to the stallion.

Hollywood is so special he has his own Breyer horse model, issued in 2018. Justine has carried the American flag on him at the Wrangler National Finals Rodeo every year since 2007.

As she braids towards the end of his mane, she makes it tighter. “Since the end is heavier, it has to be tight so it can hold the weight. If not, it will be falling.” To tie off the braid, she uses electrical tape because it doesn’t pull or cut the hair. Occasionally, Justine doesn’t close the braid with anything, and it doesn’t come undone.

She chooses to do one braid on Hollywood, because she believes it’s quicker than doing multiple braids.

The Garcilazos make their home in Texas when not on the road.