The drought that summer had hung on until the dams were getting low. Oddly, there’d been enough rain to keep the grass growing, but there had been no runoff into the dams. I watched the water close where the cows ran on summer pasture. But, when water goes bad it happens fast, so just a day or so after I’d been through the cows and checked, I had sick cattle. Having anticipated this, I’d been able to lease a pasture that had better water and good grass. We trailed the cows several miles to a set of corrals we could load out of. The cows and calves were pretty puny and most had a bad case of diarrhea from the water, so we trailed them slowly. One old cow was in awfully bad shape, so I decided to take her home and coddle her and her calf for a bit until she got straightened out. I knew good water would “fix” the rest of them. We loaded the cattle and took them to the new pasture and settled them on a nice dam that was nearly full from a localized heavy rain. It was quite a relief to see them getting a drink of that good water.

We went back to the corrals to get the old cow and her calf. We had three horses, a cow and a calf to haul in one 16 foot trailer. Not a big load but awkward. We finally concluded that the kindest horse that ever lived would be a good companion for the snuffy old cow and her calf, so my Lily went in the front compartment, was turned butt forward and tied so we could load the cow. The old sick cow was waspier than usual since she was weak and felt defenseless, but we patiently waited until she got in, then shut the divider. I reached through the side and untied Lily and hung her halter rope over the horn on my saddle. Everyone was standing quiet so we loaded the other two horses in the back and headed home.
There was quite a bit of movement in the trailer on the way, but it wasn’t terribly far so we just kept going. Everything was upright when we arrived and unloaded into the corrals where the cow was going to be staying, but Lily was mad. I mean, nostrils wrinkled, grinding her teeth, ears pinned back, pouty eyes, mad. She was also painted full length, both sides, as were my stirrups and cinches, with the runny stuff the old cow was producing. My halter rope was down and a mess too. The calf was standing under Lily’s belly and the cow and Lily had changed spots. Probably several times.
Lily was a mess, but there wasn’t a mark on the cow or the calf. I knew the calf was safe with her since Lily loved all baby things, from kittens to calves. But that cow had insulted her deeply. I’m suspect the old wreck had gone under Lily at some point, but had certainly stirred the pot the whole way home. But, due to Lily’s sweet nature, it hadn’t occurred to her to bite or kick her. She simply didn’t know how to be mean.
I gave my saddle, cinches and halter a bath then gave Lily one when I had her unsaddled. By the time I was done cleaning her up, she was back to her sweet, doe eyed self, no more puckered up face or grinding of teeth.
Lily didn’t hold a grudge and the old cow got straightened out and hauled out to the pasture in a week or so, but not in the same compartment as Lily. I couldn’t ask that of her again. Once was enough. Even the sweetest horse that ever lived has her limits. 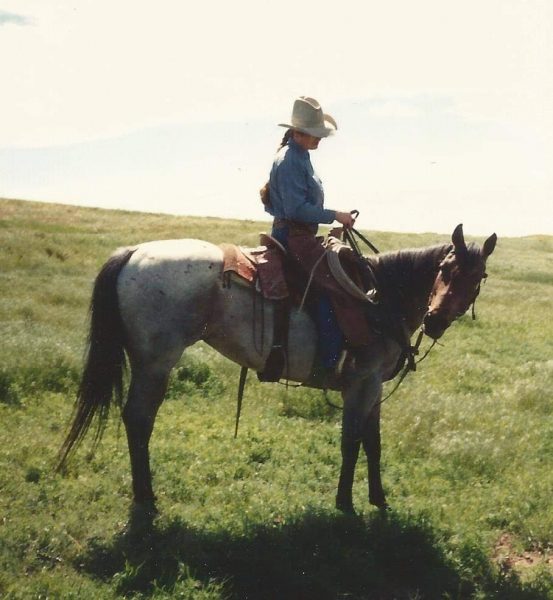