Temptation with a Hammer

The saga of working for Dick continued after the preliminary day. The cows had to be gathered after a few weeks to sort the bull calves off so he could haul them home. Those nice cows walked right into the corrals and they sorted fine. The bull calves, who were big boys, loaded into his trailer fine and that day was a breeze. I was really liking those cows and how they handled. Whoever he’d gotten them from had sure done a nice job with them, both with genetics and handling. The day came when the cows and their heifer calves were to be hauled home. The truck was scheduled to be there mid-afternoon, so we got up there about noon to get the pens ready and the cows gathered. There wouldn’t be a full load on the truck, but it was sure better than making repeated round trips of about 200 miles to get them home. Made sense.
The problem was the loading chute. It wasn’t useable anymore. The posts were still there and pretty solid, but the floor of the chute was laying on the ground with weeds growing up through it. I pointed that out to Dick. He said we could fix it right up. Not that he’d brought anything to fix it with, mind you, but with the grisly remains of 50 years of pens and junk around there, we were sure to be able to find something useful. He hadn’t even brought a hammer or anything basic like that. I had my own outfit, as I couldn’t tolerate riding with him. So, I got into my toolbox and got out a big driving hammer. I dug around through the piles of junk wood and found a bunch of spikes, some of them quite large. I straightened them out as best I could.
We found a piece of bridge timber that had a good solid six feet of unrotted lumber on one end and that was to be the support for the high end of the floor. The issue then was getting the floor up to where it needed to be, holding the long timber in place, and driving those spikes in to hold it there. The chute floor was way too heavy to drag out and place on top and it was also wider than the inside of the posts at the ends. So, we crawled under it after propping it up with a piece of rotten post and pushed it up into
position with our feet. Gads. 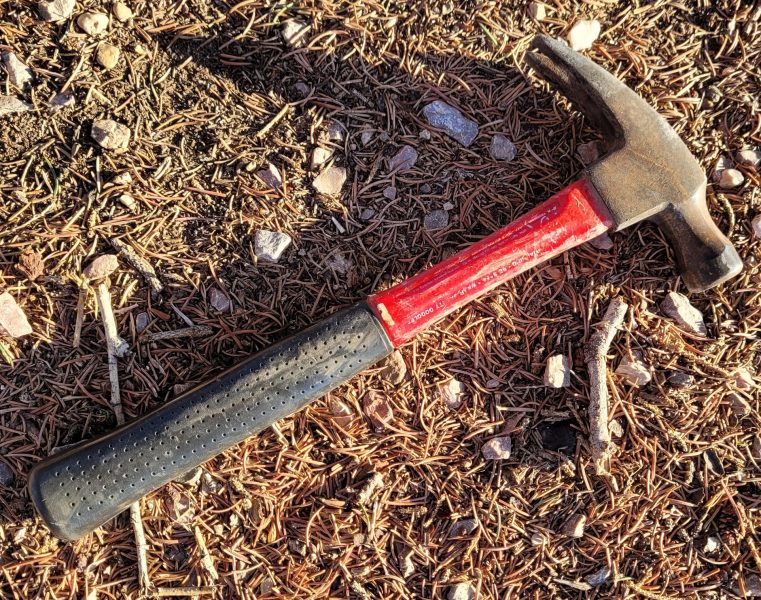 Once the floor was up high enough, I worked the bridge timber in under the floor and up onto its side against the posts.. I’d already started some spikes into it to save some labor, so, had to line them up. While Dick held the floor, I walked the timber up to where it needed to be. While in that very uncomfortable, crippling position, he made a very rude, suggestive comment on what we could be doing while laying on the ground. I turned my head and looked at him, big hammer in my hand, and said “You say the dangdest things to a mad woman with a hammer in her hand.” Making me madder gave me the extra strength to drive those spikes in pretty quickly. Then we lowered the floor onto it and it held. I drove in some more spikes to give it more stability and crawled out. Dick was standing there smiling at me. I told him that I was tempted to make a dent in his head with my hammer. What a jerk. I added a center stringer under the chute and put my hammer away before it got used in an inappropriate fashion.
The cows gathered like perfect ladies and the truck should have been winding its way into the pens. It was several miles off of a county road. I couldn’t hear a thing. I knew the driver and knew that he was a punctual person so I became concerned.
Dick had a bag phone in his pickup and decided to drive out and see if he could get enough signal to talk to the driver. After another 40 minutes or so, he was back. The driver was running way late due to a breakdown. He’d left a message with Dick’s wife that it would be nearly dark by the time he got there.
It wasn’t the first or the last time I’d wait when a truck had problems, so I decided to just relax and not stew about it. Dick decided to stew. He paced around and complained about truckers. I told him to put a sock in it as being a bull hauler wasn’t any piece of cake and that that driver was doing the best that he could. Finally, Dick decided that he had something important to do someplace else and told me he was going home and that I could load the cows whenever the truck got there. I told him to write me my check and that that would be fine. He did and left. Whew.
Finally, after it was too dark to see, I heard the truck coming down the trail. I sure felt for that good driver, Maynard, and knew it would be tricky in the dark with never having been there before. I walked down the trail to meet him and we walked around so he could see where the junk was at and the draws and big rocks. I had a good maglite and he had me shine it on the tricky spots and then the chute. He backed up and gently kissed that poor precarious chute with his bumper and set his brakes. Perfect. It was then that he asked me what he was loading. I told him how many cows and how many big calves there were. I mentioned that they were Saler cows. I could feel his apprehension. I assured him they were nice. He said he sure hoped so as his lights weren’t working inside. He got in his trailer and set his ramps and gates and told me how many to bring. He stayed in the trailer. The cows walked by me like the ladies they were, right up that rickety chute and into the truck. Not a one even slipped a foot, much less kicked. We finished the load and Maynard came out of the trailer and closed his gate. He was absolutely amazed at how quiet those cows were. It was a spooky deal for him as he could just make out shadows as they loaded. At least I had the benefit of knowing the cows.
Maynard started down the trail after letting me top his cup off from my thermos. I topped my own, loaded my horse and followed him out. I hoped that day was the last time I’d ever have to be around Dick. But, I sure would miss those nice cows. They’d really grown on me.