I was day working for some folks in the fall twenty plus years ago. It was a family ranch with the patriarch of the clan there as well. We were preparing to gather a big pasture to ship the cows home as I recall. I had brought a horse of my Dad’s, as my string was getting a little weary. Sailor was a dandy. I’d watched him born, out of the old mare who had raised me. I had started him and probably, over the years, ridden him more than my Dad, who didn’t get along with him. So, he was my pard, even though he belonged to Dad, and I often borrowed him when I needed another horse.

Sailor, with a fresh trim, measured an even 17 hands. I’d measured him on cement one time to know for sure. He was tall, narrow and cinched really deep. His withers were very high so I had to double pad him with cutouts to make my rig fit right. My stirrups didn’t even reach the belly line on him and I could nowhere near see over his back.

I was getting him bridled, as several us were going to head for the far end while the owner and a couple others finished getting the corrals set up and panels moved around. The Dad of the man I was working for was standing close by visiting with me while I was bridling Sailor. He watched as I tightened my cinch.

His son had asked his Dad to come help him with something and the old gentleman had said he’d be right there. He continued to stand by Sailor’s head while I was zipping my coat and getting ready to get on. His son spoke to him a couple more times, with just a grunt from the older man. Finally, the son spoke up kind of loud, “Dad, are you going to help me or not?” His Dad said he was, but wanted to see just how in the world I got on this tall horse first. Chuckling, I obliged and stepped on, and without much effort back in those days. 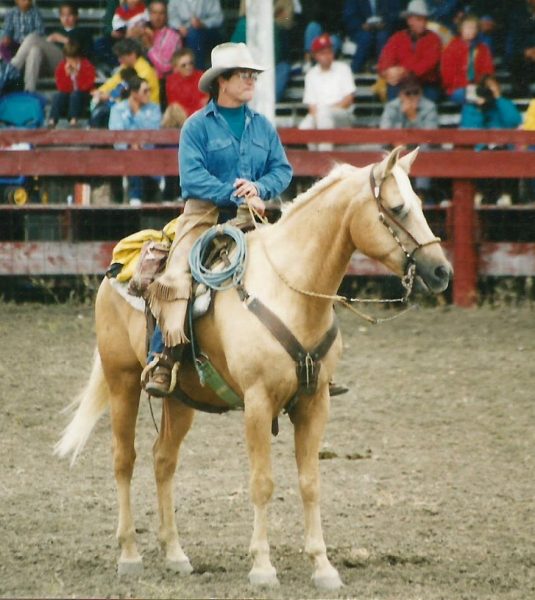 Sailor and I at a rodeo where I was turning in roughstock scores.