“Do something, even if it’s wrong!”

Years ago, these words were spoken to me by a horse trainer that I once worked with. I loped horses for a cutting horse trainer in central Texas, and Ben started the two-year-olds. He worked them on cattle after the head trainer was done for the day, and I helped by turning back for him.

One day, Ben was frustrated with the way I froze up and didn’t move when I was unsure what to do, a response that is not useful when turning back for a cutter. When I was unsure of the right move to make, I would sit real still on my horse against the side of the big, solid-walled round pen. I was afraid to ask my horse to take a step forward, because what if that wasn’t what I was supposed to do? I didn’t want to bump the cow to the left, because what if that wasn’t what Ben wanted at that particular moment? Should I bump it to the left? Should I pretend I wasn’t there, and instead leave Ben on his own while I mentally transported myself to a tropical island?

Due to my inaction, the cow would meander around while its connection to the colt Ben was riding grew increasingly weaker. Then, when I had missed all the unspoken signals I should have picked up on and reacted to, he would tell me to do something, anything, just move my horse.

After weeks of loping cutting horses, I eventually learned that taking action and trying to participate is better than doing nothing. Even if I made a wrong move, at least it showed that I was trying and wanted to do the right thing. My days of loping cutters are long gone, but I’ve carried this lesson from the cutting pen into other areas of my life.

Just like when I would freeze up alongside the rail, I tend to get stuck when I’m not sure what I should do. Should I change career paths? Should I go on another date with that handsome, tall buckaroo? Would moving to another state be best for our family? Do we eat enough white meat? Is that other brand of laundry detergent better than the one I’m using now?

I like to know what’s expected of me, take notes of each step, do excessive amounts of research, drive experts/my best friend/my husband/anybody crazy by asking an absurd amount of questions, study the correct way to do something, and practice until I’m ready to take action.

But, with this plan of non-attack, I often feel like I’m never ready to take action. Sometimes we can’t observe, learn, practice, then act. When launching a new career, soothing a first baby, packing up breakables for a long moving trip, or necking a run-back calf, it’s usually best to “do something, even if it’s wrong.”

Just jump in, get your feet moving, and take action. You’ll learn on the job, and get bonus points (and, more importantly, real-life experience) from the effort.

When this picture was taken, it definitely wasn’t a stellar roping day for Jolyn Young. I lost my rope once, almost lost my rope twice, got really flustered several times, and felt like the dummy on the crew. But, I hardly ever get the chance to rope and ride since the kids were born, so I rode my horse, roped some calves, and learned how to make my hands faster at dallying and to kick my horse up so I wasn’t trying to stop the calf with my hand like a numbskull. 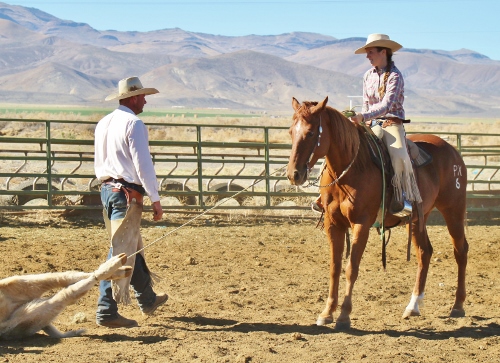 All lessons considered, it was better that I did something, even if some of those things were wrong.