It’s been a big sweet clover year in the northern plains. For those who aren’t familiar, sweet clover with it’s yellow blossoms, gets really tall and thick. It doesn’t happen every year and needs a good wet spring to really do well. It’s a biennial plant, so, it blooms the second year of it’s cycle.

Decades ago, the country was yellow clover nearly everywhere you looked. That year I was riding on a lot of summer cattle on the gumbo. Sweet clover gets really tall there and was up to my knees on a fairly tall horse in many places, and up to my horse’s belly everywhere else.

One of the horses I was riding that summer was an eight year old Paint stud I was putting miles on for someone else. He was about 14.2 hands so we didn’t stick up out of that clover very far. He was also a clutz and stumbled constantly. Riding him through that clover was a challenge as he could barely keep on his feet on a bare flat, much less in rough pastures where the ground wasn’t visible. 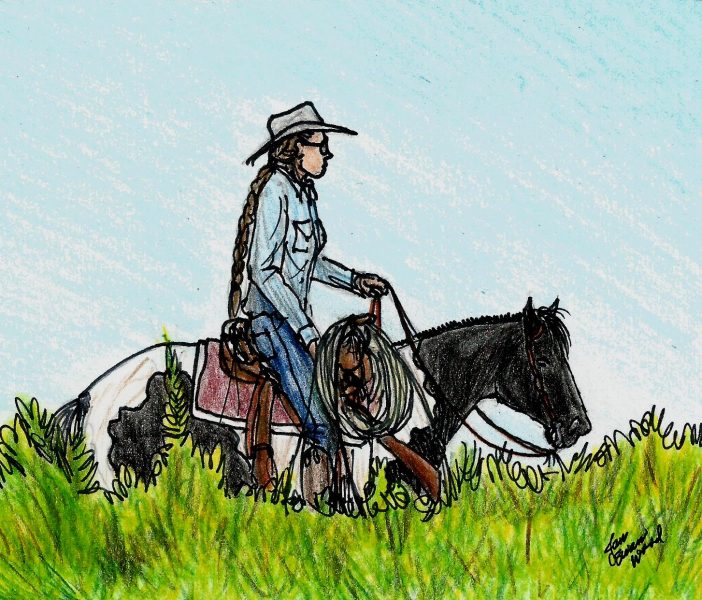 I called him Dale, amongst other more descriptive names, and I was determined to make a horse out of him for the owner. He got ridden without mercy as a result. I will guarantee he was tough, as an eight year old stud should be but he just didn’t care whether he stayed upright or not. About 30 times a day he’d stub a toe and drag his forehead on the ground before I could pull him up. I’d whip him where a colt sucked with the loop of my rope at the same time, so one would think he would have started putting a little more effort into it. Nope.

Besides being a clover year, I think there were more rattlesnakes out and about that year than I can remember. It probably was due to the great cover and it kept one on their toes. Except for Dale, who might just fall on one. It was downright creepy to be riding through that thick stuff and hear a snake buzz. It sure didn’t seem to concern Dale as he never so much as turned an ear toward it, unlike every other horse I’ve ever ridden. I always located the snake and killed it with the tail of my rope if I could.

I was riding down through a series of deep gumbo washouts and the clover was nearly up to my waist in the bottoms of them. Dale was stumbling along as usual. I had been fighting some pinkeye in the steers in that pasture, so had to ride on them pretty close and they liked to hide out in that big clover to get away from the flies that pestered their eyes. Dale and I had doctored some of those steers, so he was learning his job that way and would actually work a rope and all that real cowhorse stuff. He never acted afraid of a rope.

While in that jungle, I heard a rattler buzz. I stopped Dale to figure out where it was before making another move. I finally spotted it in a thinner patch of clover about 10 feet away and got off of Dale to kill it. I tied my bridle rein to the loop end of my rope so I could keep him away from the snake while I killed it. I stepped toward the snake and proceeded to pound it’s head flat with my rope. I don’t know what deja vu moment Dale experienced from his former life, but he started making laps around me in that mess of clover as hard as he could go on about 20 feet of my rope. There was no one home even though I tried to stop him and turn him toward me. He repeatedly ran over the rather disgruntled snake, even flipping it up in the air with a hoof several times. I finally got him herded away from the snake and stopped. He was blowing hard from the fast laps and all bugeyed. The snake was dead, it’s head crushed from one of Dale’s feet. I examined Dale from head to toe and found nary a mark on him from the snake.

I was sure relieved that he hadn’t gotten bitten and thereafter hobbled him before killing another snake. He’d still try to make laps but with his clumsiness, he would fall down and lay there while I did what I needed to do. Sweet clover, rattlesnakes and a clumsy horse were quite a combination.