Back when I was in high school I rode a sorrel gelding named Joker that my family had raised. He was a really nice horse, but a little snorty on the ground and pretty suspicious of one’s activities while aboard, especially as a colt. He wasn’t broncy, but just quick and sudden, shall we say. When treated with respect on the ground, he was plumb nice, and I grew to really like him right away.

I think he was a four year old the summer these two incidents occurred, and he was still pretty watchy about everything. I was riding on a big bunch of summer cattle on the country east of my folks place, and I was doing all the riding on both places so we made lots of big circles.

I was on Joker and we had been at work since before daylight and were many miles from home. On the far side of the summer range, there’s about a mile long flat of mostly sparse grass, hard pan, cactus and big rocks. We were toodling along across that ground, headed north and were just covering country without a care in the world.

All of a sudden, seemingly right on top of us, was a squadron of fighter jets, in formation, flying north at what appeared to be warp speed. Just as we saw them above and then ahead of us, the sound of those planes caught up and we were stunned by their roar. I really don’t know which of us was scared the worst, but poor Joker just didn’t know which way to go! He squatted nearly on his belly, then skittered right, left and then backward quicker than I could blink. I was so scared you couldn’t have pried me out of my saddle, so he didn’t lose me. As they sped northward, they raised up and shot over the top of Owl Butte before disappearing from sight. 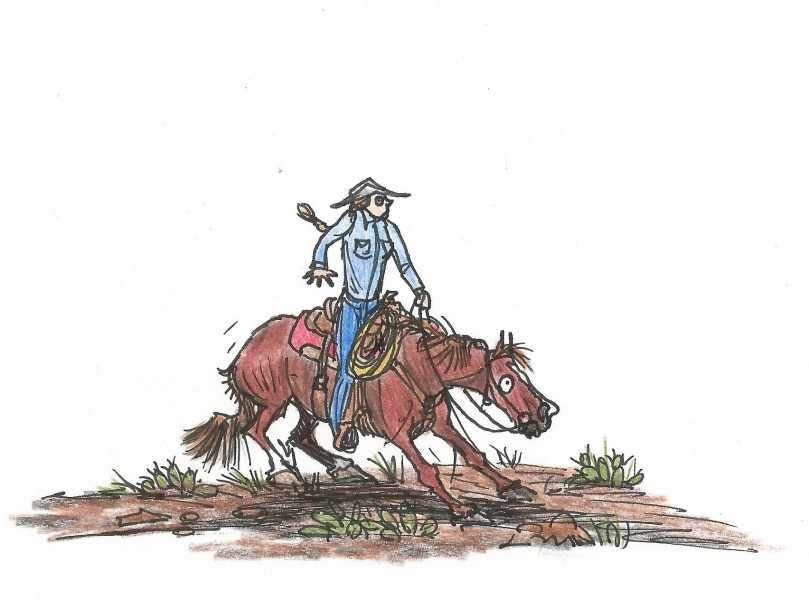 I stepped off of Joker to let both our hearts slow down and we just stood there and looked at each other with our eyes bugged out and the sweat running. It was a while before I stepped back on and we never quit looking over our shoulders for the rest of the day.

It turns out that those planes were the Blue Angels and they were training for their air show from the Air Force base about 50 miles south of us. I don’t know if those pilots even saw us on that long flat, but if they did, they probably got a chuckle out of scaring the dickens out of a sorrel horse and a rider.

Later that summer, just about when we had gotten over the nervous twitch from the jets, we were trotting across a rough corner of another one of those summer herd pastures. I was checking all the draws between ridges with big grass growing on them. I was busy looking at the cattle below me, as I presume Joker was.

Suddenly, my hat was knocked off while simultaneously there was a whoosh and a screaming/screeching sound in our ears. Joker and I both jumped about 10 feet then squatted again, reminiscent of the jet “attack”. The attacker bombed us again, though not quite as low and we skedaddled out of there. Safely on the other side of the draw, we turned to face our attacker. It was a big mama hawk and she was pretty upset with us for riding so close to her nest on the point of the ridge among some rocks. Joker would have been satisfied to just leave the scene right then, but dadgummit, I needed my hat! I got off of him, trying to make a shorter target, and talked him into following me back over to my hat. I hastily crammed it on my head and we got out of there pronto. Mama hawk was still diving at us, but got less aggressive as we moved away from her nest.

The rest of that summer Joker and I had necks like owls from looking around us all the time. Even dragon flies and song birds could make us flinch, but we didn’t experience any more “air assaults”.