Nearly everything that was done on one ranch I worked on was somewhat slaunchwise and sometimes ridiculous. That actually described the owner to a T. We’ll call him Frank. I lived about 30 miles from the ranch as there was no housing there for me, so I slept in a little house in town and spent the other 18 hours of the day at the ranch or driving back and forth. My horses were at the ranch.

When I got to work each day, I’d hang morales on my saddle horses with their grain, saddling my horse for the day. I rode my own as the ranch horses were more than a little sketchy. When he was done eating his grain, I’d head out and jingle the ranch horses into the corral. They were an absolute street gang of horses, varying from gentle and sorry to good looking and dangerous, plus combinations in between. Some had escaped from an equine psych ward, and some were just assassins. Such an interesting group that I was grateful I didn’t have to ride.

So, I’d trot this bunch of misfits into the big round pen in front of the barn and catch a horse for Frank. He usually said the night before who he wanted, but sometimes I got to pick it out for him. Two were particularly interesting individuals. They were a mule named Johnny and a tall gray horse named Crazy Louie. To be fair to my boss, he could not only ride but get a day’s work done on any one of these critters in spite of their behavior.

Johnny was a smallish spotted mule. Not a bad looking individual, but he had the personality of a badger. Every square inch of Johnny would hurt you if he could. He’d bite, strike, kick, mash you, run off and occasionally buck. Saddling him was a bit tricky. Once caught I’d tie him up short to a stout post, brush him off where the saddle and cinch went, dodging front and hind feet the whole time. He’d even swing his butt around and mash one against the fence and then tromp you to the ground if he could. Sweet little guy. I’d get him saddled, using a stiff wire to snare the cinches and pull them under him. Then I’d tie a piece of baler twine to the britching and walk way out around behind him while he kicked with both hind feet. Once saddled I’d turn him loose to work out some of the kinks before Frank had to get on him.

Crazy Louie was dangerous in a whole other way. He wasn’t really snakey on the ground and didn’t offer to strike and seldom kicked, but you just never knew what he was going to do from moment to moment. I remember one morning the horses had trotted quietly into the round pen and Crazy Louie just grabbed a gear and jumped over the high gate on the other side. He drug his hind hooves a bit, but he flat airmailed himself over a gate that was easily seven feet tall. He was still in another corral, so I turned the others out the way they came in and let him back in. That time he just stopped and waited for me to catch him. Like nothing out of the ordinary had happened. Once caught, I took Crazy Louie into the barn to saddle him next to where Frank kept his saddle. The ceiling was really low so there was just barely enough room to throw Frank’s saddle on Louie. It would seem it would be easier to saddle him outside but I had my reasons. About 80% of the times when I saddled Crazy Louie, he’d flip over backwards or something else kind of exciting. He wouldn’t in the barn because he’d nearly brained himself a few times doing that and had actually learned that it hurt. 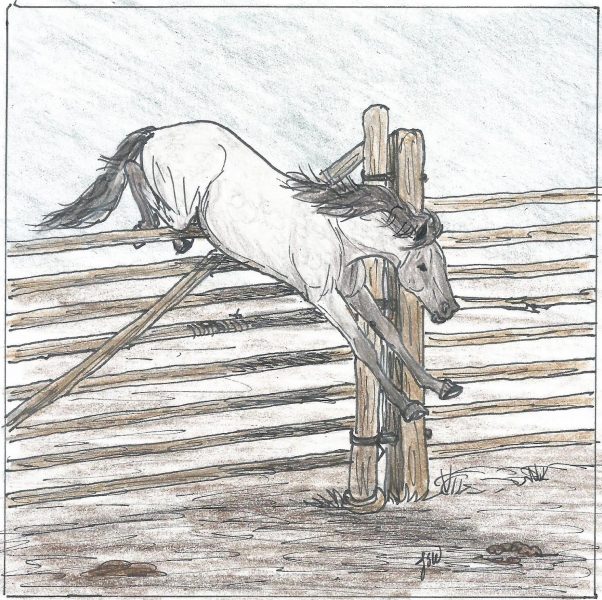 On a side note, Frank spoke nearly daily about how dangerous my oxbow stirrups were and he sure wished I didn’t use them. It was nice that he was concerned, right? Here’s the thing, Frank had cut a couple of chunks of big irrigation pipe off with a cutting torch and used them for winter stirrups. To say they were shaped like stirrups would be a stretch of the imagination. At the top they were narrower so that his stirrup leathers would be able to fit around them. At the bottom they were about six inches wide. The edges were rough from the torch and I don’t know how many times I had to get off and pry his feet out of his stirrups because they had frozen in when he got a little mud on his boots. So, yes, my oxbows were absolutely dangerous as far as he was concerned.

So, back to saddling Louie. In the fall, before Frank created his fancy winter stirrups, he had just a regular stirrup on his saddle. I’d lay the off stirrup up over the saddle to get it on the tall gray horse and invariably he’d try to jump out from under it and maybe out of his skin. You have to understand that the action was pretty fast and furious in the saddle shed when it was Crazy Louie being saddled. One morning he jumped just as I slid the saddle over him and that stirrup, which weighed a lot, flopped down with enough force that it really thumped ol’ Louie in the ribs. Crazy Louie grunted loud and stopped moving. I have no idea what went through his mind, but from there on he’d stand still to be saddled.

After the horse or mule saddled and soaking, I’d walk up the long hill to the house and there Frank would be, putting on his many layers of clothing with holes in them. He’d make sure no holes overlapped if it was really cold, which on the northern plains in winter, it always was. Layers of pants on, he’d then try buckling the back buckle on his chaps. He usually couldn’t. They were, shall we say, snug. Frank was probably easily 60 pounds overweight, mostly around the middle, so I’d have to put my foot on his backside to get enough leverage to pull the strap far enough through to get a hole to buckle it in. Then I’d have to buckle the legs of them too since he couldn’t bend over very well. Finally garbed for an all day ride in the cold, we’d sally forth.

He’d get in the pickup with no heater which was parked on the steep hill, trailer hitched to it. He’d clutch it and I’d give it a push, and it would coast off so that he could clutch start it as it didn’t start otherwise. Then we’d load up our saddle stock and head out to gather or check cattle and sheep. I’d have both big fluffy working dogs on my lap and legs to keep from dying of expose from the cold air coming up through the hole in the floor, which though covered with junk, still leaked. It was nearly warmer on my horse. I needed a job desperately when I took that one and it was quite an experience. I’ve never worked for anyone else like Frank, hope I never do, but he was definitely entertaining. I’ve laughed about the things that happened on that ranch and they’ve made rich fodder for the stories I’ve written. Needless to say, when another job came along, I gathered my horses and moved on. I’d done my time with Frank and the street gang.