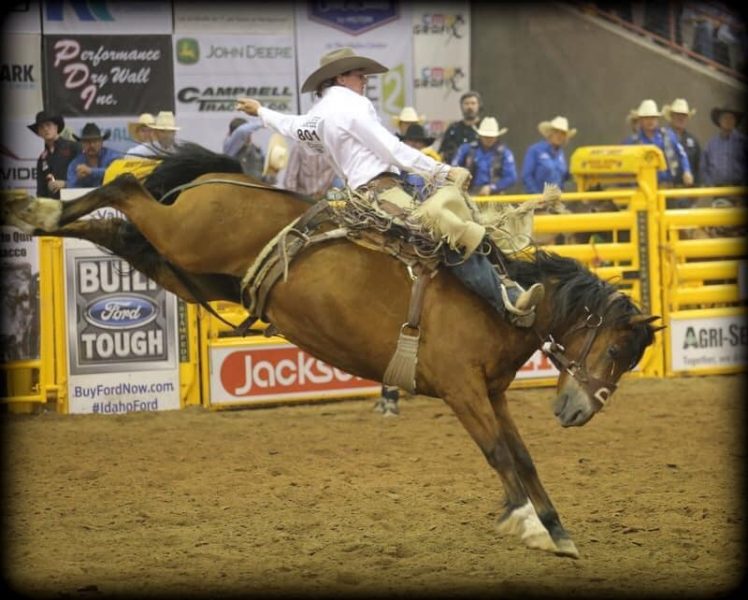 Spider bucks at the 2021 Nampa, Idaho rodeo days before he passed away due to colic. Photo courtesy Thomas Duncan.

There’s a hole a special horse used to fill, at the Gunderson ranch in western North Dakota.

H46 Spider, a bucking horse in the Bailey Pro Rodeo string, has passed on to greener pastures. He was originally owned by Montanan Jack Hinland, who sold him to Shane Vaira.

He was quite a character, according to Brandee Moore, Shane Gunderson’s partner, and had his own unique personality.

A 2017 Badlands Circuit Horse of the Year, he had a huge rare-out as he came out of the chutes, and if a cowboy could survive that and make the buzzer, he could come away with a lot of points.

He loved to rodeo. As he got older and Shane and Brandee tried to leave him home when they went to rodeos, he hated it.

Shane tried to retire him two years ago, but when he stayed home, he got depressed, lost weight and went downhill rapidly, Brandee said. “He was always the last to sort and the one that wanted to go,” she said.

When they put him back in the rodeo string, he revived “and was better than ever.”

Spider, whose brand was H46, was selected to buck at the 2018 Wrangler National Finals Rodeo, and his special friend at the time, a goat, almost made the trip to Las Vegas with him. 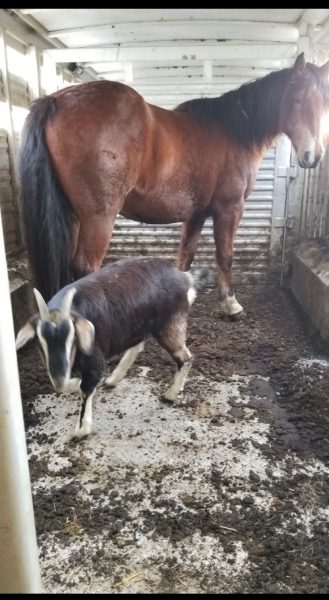 For a while, Spider, a saddle bronc horse owned by Bailey Pro Rodeo, had a goat for a friend. When Spider was loaded to go to the Wrangler National Finals Rodeo, the goat nearly made the trip with him. Photo courtesy Brandee Moore.

He and other Bailey Pro Rodeo horses had been housed at Jim Hystad’s ranch as pens at the Gunderson ranch were being built. Jim’s grandson had goats on the place for high school rodeo, and “this nanny took up with Spider, and Spider took up with this nanny,” Brandee said. “Every time I’d go to feed, that goat was there, and Spider loved her.”

When it came time to load horses to go to the National Finals, the goat loaded with Spider. When they took the goat off, Spider got off the truck with her.

“I thought I was going to have to send that goat with him to the Finals,” Brandee joked. But eventually they were able to load Spider without his friend, and when the Bailey Pro Rodeo horses came home to their new pens, the goat did not come with them.

In another story about Spider, the saddle bronc was at the 2019 Rodeo Houston when there was an error in the draw. Spider ended up bucking twice in the same performance, with an 88 point ride first then a 90 point ride. “He didn’t quit anybody, that’s for sure,” Brandee said.

On that fateful day in July, Spider colicked in Nampa, Idaho, after having bucked the day before. Brandee and Shane did all they could. “We doctored him and did everything anybody could do, without doing surgery,” she said. Because of his age, “we opted not do” surgery, and Spider passed during the night.

She brought home hair from his mane and tail, and he’ll have a headstone and burial spot at the ranch. 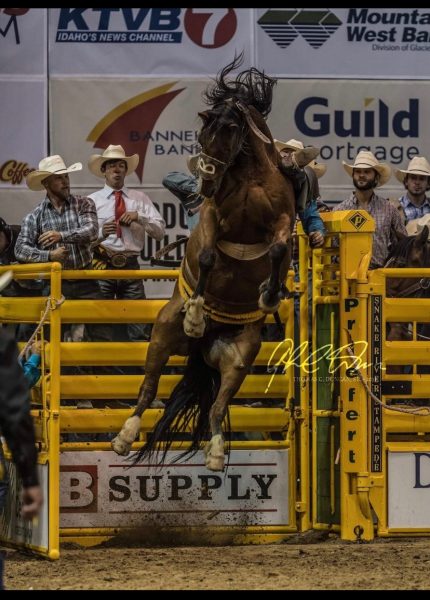 Spider had a big rare-out and if a cowboy could survive it, he could be a lot of points on the big gelding. Photo courtesy Thomas Duncan.