It was mid-summer when I got a call to go help a guy sort a bunch of cows and calves that had gotten mixed up at his place. My son was big enough to be good help, so he was included in the daywork agreement. I asked the man, who I’ll call Harvey, what time he wanted us there to start and he replied “early”.
We were up in the dark, saddled and drove the 45 minutes to his place and got there just a hair past 5 a.m. and I was already concerned that we were getting a late start, but that’s how the morning had gone for us. As we pulled in and made the turn in the yard, my headlights shone on the house windows and a light came on as we got out of the pickup. We unloaded and tied our horses to the trailer. I kept looking around, thinking Harvey must be out getting saddled up at the barn, but I saw no activity. The only horses I could see were out in a little pasture by the corrals. Finally, looking toward the
house, I saw the kitchen light come on. I’d been in the house before so knew the layout. Colin and I walked to the house and knocked on the door. Harvey, in jeans and a t-shirt, let us in. His hair wasn’t combed, he wasn’t shaved and the coffee was just starting to brew. Apparently his idea of early and mine were quite different.
He invited us in, seeming surprised to see us so early. He got me some coffee and something for Colin and went to finish getting dressed and get himself pulled together. Colin and I looked at each other, knowing the day was off to a bad start. We should have already been gathering the cows that were mixed up.
Harvey had a bite to eat, and we headed out. He walked to the barn, got a halter, moseyed out to the pasture and caught a horse. He walked slowly back and got him saddled. It was his stud horse, who he was very proud of. He was a pretty horse, bright sorrel with some chrome, and not badly bred if you weren’t seeking speed or cow in abundance. He was darned sure gentle.
We finally loaded up in his big stock trailer, and started the long drive out to the pasture. By the time we got there, it must have been well after 8 a.m. and it was already warming right up. Colin and I were both riding good traveling mares, him on Snickers and me on Lily. They walked fast, loped easy and could really cover the country. But, the stud horse was apparently stuck in first gear, as was Harvey. We left the trailer at a slow walk and walked about a mile to get to the pasture. We’d have driven closer but a rough draw prevented us from it. My impatience was starting to twitch. It was already pretty warm to be
sorting four wheeler broke cows.
The cows pushed like chain as we gathered them. Our objective was to hold them in a corner near a gate and pair the cows that belonged in the pasture out, holding the neighbor’s cows. I doubt a single one of those cows had ever been paired out or handled horseback. They were absolutely uncooperative. Since he was the “boss”, he was trying to do the sorting. He and the stud moved even slower than the cows. We weren’t making much headway, so I asked him if he wanted me to help sort. He thought that might be all right. While Colin and his good horse held the bunch, I’d slip in quietly and Lily and I would
trail a pair out. Harvey thought it was just amazing and kept expressing his approval. He and the stud weren’t even able to hold the bunch together, so Colin and I were still doing that too. 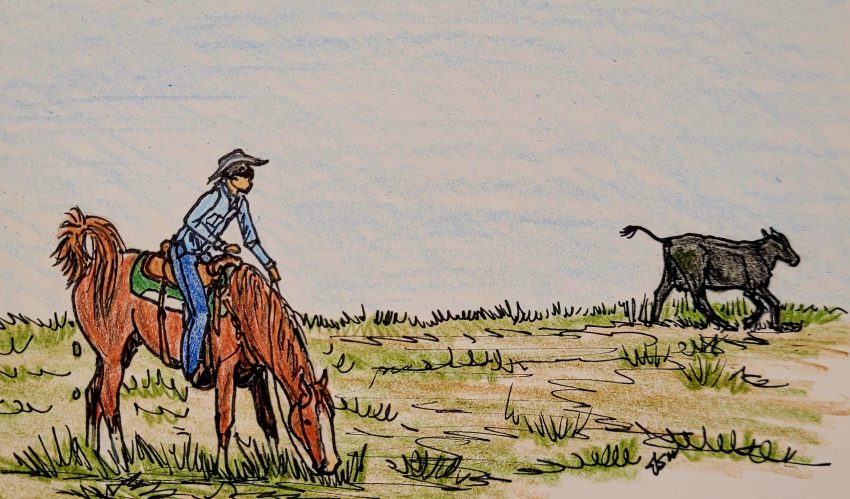 Finally, we were down to just a few head that needed out. The neighbor’s cows by this time were over wanting to standing politely in the fence corner. They were pushing on us pretty hard, but our good horses kept turning them but it was getting harder. One cow broke on Harvey’s side of the bunch and headed down the fence at a high lope. He asked his stud to catch her. The stud almost broke into a lope and then stopped to take a dump and get a bite of grass, which was apparently okay with Harvey. I was by this time not really caring if I offended this guy and I broke the cowboy law and rode by him and my good horse turned the cow and brought her back while Harvey tried to get his horse out of the way. I told him in my Mom voice to just try to hold them and that I’d start pairing the neighbor’s cows out the gate. My Mom voice was loud enough that Colin heard me too so knew the plan.
The cows went out the gate pretty well and some of them even remembered they had a calf, so before long, we had them done. They had to be trailed a little ways down the fence to another gate that went into their pasture, and Colin and I did that while Harvey and the stud horse got the gate shut behind us. We rode back over to him as he gathered his reins up to get on. As we started the ride back to the trailer, I was fed up. I knew Colin was too. Our good mares had put in a hot, hard day doing all the work and we had started danged early. We’d politely held those good walking mares up so they didn’t get ahead of him on the way out to the cows, but by the time we were done, my manners were gone and, giving Colin a nod, I
threw Lily’s head at her and she and Snickers hit their running walk pace and we rode to the trailer. We had loosened cinches, aired backs and were letting them graze in the shade by the trailer as Harvey moseyed along on his stud and finally arrived.
He wasn’t hand enough to know he should be offended by my behavior, and was just thrilled with how it had all gone. He was amazed that “we” had gotten them sorted so easily. Easy for him and studly, that’s for sure. My guess it was his first time sorting out in the pasture. He’d sold a big farm back east to buy the ranch he had, so it made sense.
When we got back to the place, we watered our mares in a tank in the yard. Harvey invited us in, but I said we had tired horses to take care of so we’d just go home. He wrote us our checks, which weren’t for nearly enough in view of the day we’d had, and thanked us for coming.
The sun was still blazing as we drove out of his yard. It was in the 90s with hardly a breeze. Colin and I discussed the day and both agreed we didn’t need to go back there again. We also agreed we sure weren’t in the market for one of his stud horse’s offspring either!