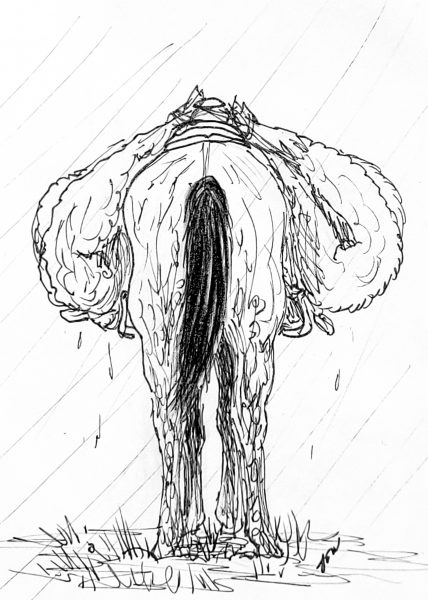 One chore on the ranch that I didn’t enjoy much came in the last weeks before lambing started. Since we range lambed, we didn’t shear until on the brink of it starting on about May 15, as those ewes could get mighty chilly once sheared. So, when it rained, their fleeces got really heavy, and combined with the weight and awkwardness of the lamb or lambs she was carrying, a ewe could get on her back pretty easy. Then she was stuck.

The heavier the rains, the heavier the fleeces. Of course, the rain meant grass and hay later, and though it was hard to complain about rain, those circles to find all the ewes that had gotten on their backs got tiresome. The gumbo would be fetlock deep on a horse and it sure pulled the sap out of them too.

When I was still in grade school, my Dad and I had ridden out to make a pass through the pasture the sheep were in. The creeks were running bank full, mud was deep, and water was standing on top of the saturated ground. Dad was riding a big, mostly Thoroughbred bay gelding called Snip. Snip was a moving machine, even in that deep mud, and it kind of toned him down so he was more pleasant to ride. Otherwise he was a cold jawed, chargey fool. I remember my arms aching on the days I rode him. It didn’t seem to both Dad much though. I was on my young horse Classy, who had a tendency to try to buck me off on occasion, but for some reason, that deep mud really took that notion out of him.

It was raining as we came across the last big flat above the creek. Within sight were three ewes on their backs. As we got to the first one, Dad stepped off to get her up. She just couldn’t do it. She had at least two lambs on board and was perilously close to lambing. Dad decided that we’d just take her home and put her in the barn until she lambed. He tied her feet with twine, lifted her up and hung her by the feet on his saddle horn. Snip stood like a rock. Dad got back on and we headed for the second sheep. Same problem. He did the same thing and hung her on the other side. With difficulty, he got back on and we went to the third and last sheep of the day. She was in the same predicament. So, knowing that my ornery young horse would probably buck me and the sheep off, it was necessary for Snip to take that third ewe.

Mind you, these were big Rambouillet ewes with a year’s fleece soaked with water. They were heavy. But, my Dad, who must have been nearly 50 by then, didn’t seem to have much trouble hanging them like he did. Getting situated back under the cargo of sheep took some work, but he made it. Snip, big and stout as he was, was packing probably close to 800 pounds if not more, what with the saddle, my Dad, and three heavy sheep. You’d have never guessed he had such a load though.

He hit his fast walk, feet popping from the gumbo with each stride, plowed through the belly deep creek crossing, and never missed a lick on the mile plus ride home. I opened and shut the only gate on the way and we cruised into the corrals in good time. I opened the big barn door and Dad rode inside to dry ground. I shut it behind us. He stepped off Snip and started lifting the ewes down. I cut the twines off of each one and he pulled them all over and propped them up against the barn wall to help them get their balance back. They all did and were up in a few hours, apparently not much the worse for wear from their upside down trip home on a horse.

At the time, being a kid, I didn’t realize what a remarkable feat it had been for Dad and for Snip. Snip was definitely an iron horse, tough beyond belief, and one of those that would never quit. I think my Dad was pretty much the same way.