It’s been quite a winter for me so far. I moved in mid-December, which is exactly the wrong time of year to move anyway, but certainly for a ranching enterprise. My cows and horses had moved in November, but the stuff that didn’t load itself and unload itself was moved in December. I have no idea where anything is, but it’s moved.

I was here less than a week when my grandboys came for an extended visit over Christmas. Oh it’s been an adventure for all of us! The daily chore routine was in place immediately due to the chopping of ice and every-other-day caking of cows. It went from cold to excruciatingly cold, with plenty of snow. It finally warmed up to more pleasant temps, and that was a relief.

Being of the fiscally conservative mindset, I was trying to cut a few miles off the daily driving routine and had a very nice route established to make my circle. The snow, before it drifted, hadn’t disrupted that route. Then it drifted. I reversed my routine to come into a big draw from the west instead of the east, thinking that gravity and speed would replace traction and good sense. So, we got stuck. Really stuck. 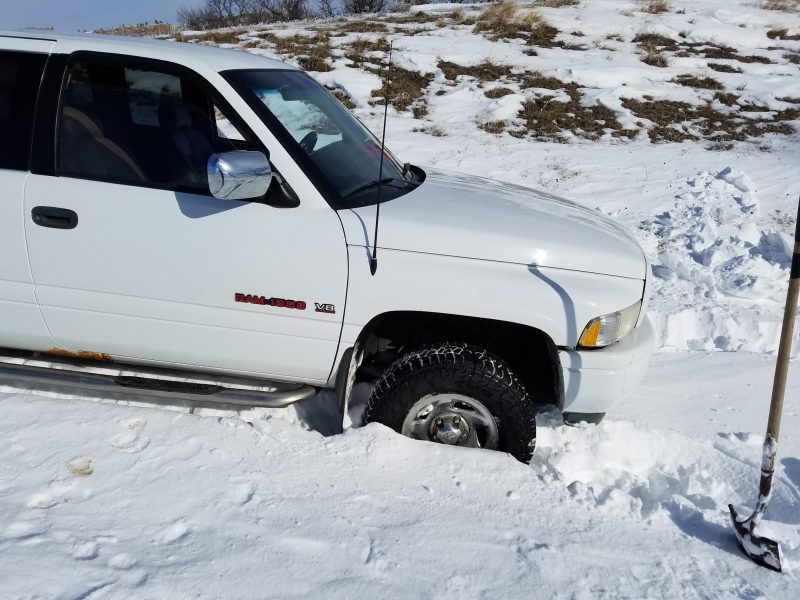 Not to worry though, it was a beautiful day, sunny and nearly 40 degrees, so our walk home was not that unpleasant, unless you’re three feet tall, then it’s harder. The boys had slid down the banks and climbed back up repeatedly while I had given myself a lovely cardio workout with the shovel trying to dig the pickup out, so they had the edge off their energy. Matter of fact, I did too. But, it was probably less than a half mile, some of it even on level ground, so we made it home just fine.

I wouldn’t have attempted that draw if I hadn’t known my son, and their Daddy, was coming up in the afternoon and could pull me out of the snowbank. I had sent him the photo of the stuck pickup before he got here, so he knew what was waiting.

What a role reversal: the Mom getting “the talk” by the son about making wise choices and not taking chances. He’ll be rubbing this in for a long time. I think I’m still winning though, because he wasn’t here (obviously) when I was a teenager, and I still clearly remember him being one. To be fair, I think he did a lot more stupid stuff as a teen than I did too. Just saying.
So, the winter follies have commenced. The big draw will remain uncrossed until the snowbank is gone. I will engage brain and try to work smarter and safer.