It’s not always possible to separate horses just the way you need to. Lack of space and facilities plus horse personalities can make running certain horses together a challenge.

It could be a stud, a nasty mare or even a bossy gelding that is the trouble maker in a bunch. A simple and old fashioned way of controlling this negative behavior and making it easier on the other horses is the use of a very effective item called a “slap chain”. 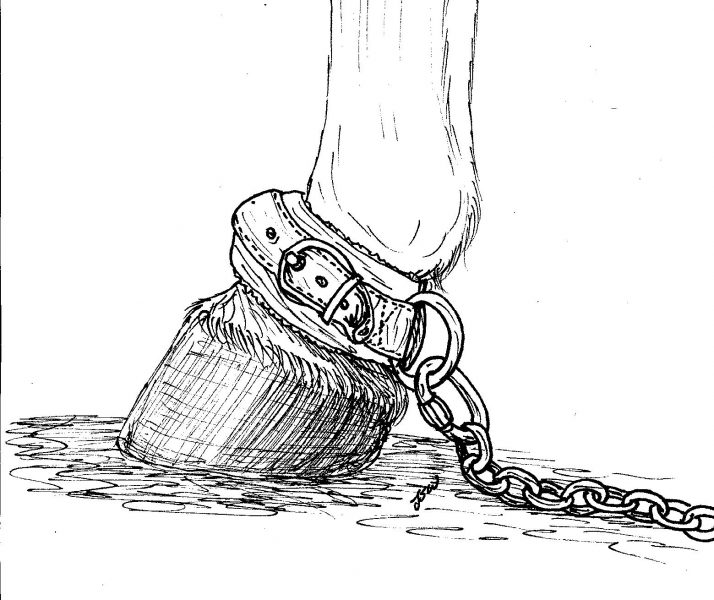 Yes, it does make use of a chain, but a smooth one with about a one inch link size. Using a bull snap or, as I prefer, a screw link that is plenty stout, attach about six feet of the smooth chain to a picket cuff and place it on a front foot of the horse who is the trouble maker. Let the horse get used to the chain dragging in a small, controlled area, such as the round pen. Then turn them out into the big pen or lot to get used to it before adding other horses. He or she may fall on their nose a few times when they step on the chain, but the chain can’t burn their legs or hurt them in any way, so they quickly learn to watch where they’re stepping and putting that foot with the chain.

After they’ve had it on for a day or so, you can add in some other horses. As long as it’s the dominant/aggressive horse wearing the chain, it will work out just fine. That horse will figure out pretty quickly that it’s easier to be at peace with their pen mates than to step on that chain when trying to bite and chase them.

A stud that was a good saddle horse and a good feller otherwise was a mean sonofagun with his gelding pal and pen mate if there was a mare within a mile. This stud learned, while wearing the slap chain, that he could get along just fine after he spilled himself a time or two. He did figure out that he needed to “throw” that chain to the outside to travel very fast, but the horse that ran with him could easily stay away from him and they got along fine as pen mates when it was required. If the stud got too fast with the slap chain we simply changed it to the other front foot and he had to relearn how to travel with it.

In all the years of using a slap chain with the rig that I described I’ve never seen it cause an injury. The bonus is that a horse that has worn a slap chain is very easy to picket break by a front foot too. They learn to “give” to pressure.

I know some old timers who would turn a horse out in the pasture with a slap chain but I never did. There’s too much chance of it getting caught on something and no one seeing it. I also didn’t have any open gates for them to walk through because of the chance of catching it at the base of a post.

Used as described, it’s a very effective way to make horses play nice with others.