My brother Dave was home for Christmas from Texas. He loved the outdoors, especially in the winter when he could hunt fox and coyotes on the ranch. He had gotten a set of cross country skis and was learning how to use them.
I had been out gathering the sheep into the winter corral in the Klingler Pasture in case a storm materialized in the night. On my way back to the house, I came across my brother on the big flat south of the creek. I stopped so we could chat. He suggested that I pull him on his skis. That sounded fun. I was riding a big, stout four year old gelding who had all kinds of energy to burn and was sharp shod. I let him put his poles through the loop on my rope and we started off kind of slow until he and my horse, Buddy, got the hang of the deal.
As Dave got the feel for it, he told me to speed up. Finally, we were at a lope. He was laughing and having a great time, Buddy was having fun loping through the snow and I was having fun with both of them. Dave suggested I take him over some little humps and I did, finally working up to where he’d clear the ground before he landed. We were having a ball! I pulled him all over that big flat and up on the slopes to the southeast. I let Buddy and Dave catch their breath and away we’d go again. We spent a couple of hours at our game, all of us having fun.
Finally, it was getting toward dusk, so Dave asked me to tow him on home. I wanted to let Buddy cool out and dry off, so we just walked and trotted to the house. I delivered Dave to the front step where he took his poles out of my rope. I left him taking his skis off and heading indoors. I unsaddled Buddy and curried him off, then finished chores and went inside. Dave and I talked and laughed about the spills he took while I was pulling him. He could really fly when Buddy loped hard and I took him over a little hump in the ground. The snow was deep and it didn’t hurt to fall in it, so he wasn’t afraid to try some fancy moves on his skis. 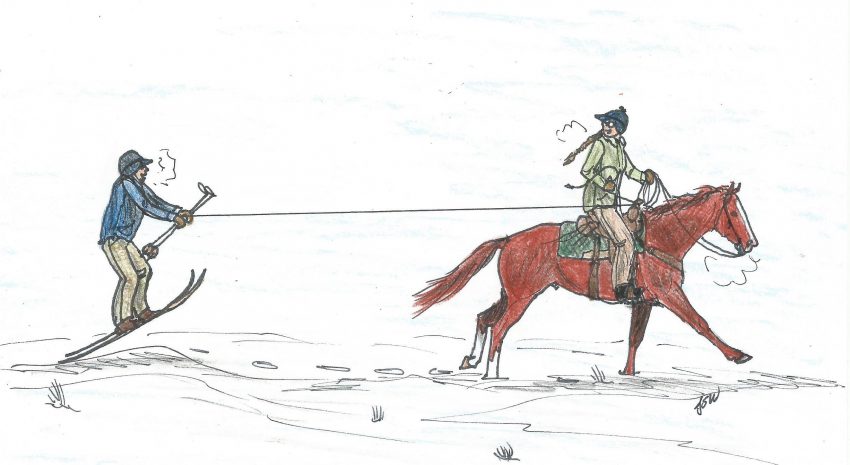 The next morning I felt great. Buddy was frolicking in the corral when we chored, so he obviously felt great. Dave, on the other hand, athlete though he was, was so sore and stiff that he could hardly lift his feet to come to breakfast. It had never occurred to either of us that the skis would be such a strenuous workout of muscles unaccustomed to them, especially when pulled so fast by a horse. Of course, I teased him mercilessly, as he would have me, and the family didn’t give him any slack either. It took him quite a while to get limbered up that day.
He never asked me to pull him again, but, he did cover a lot of miles on those skis. He had a white-out suit he wore so he didn’t show up, even wrapped his rifle in white tape, and he got a lot of fox and coyotes on those skis.
If I had Buddy now he’d be a dandy skijoring horse, since that’s what we were doing, we just didn’t know it. My brother is gone now too, but I’ll bet he’d have given it a whirl! What great memories of a fine winter day.