Side Aches with Grandpa

When I was young, from two or three on, I spent a great deal of time pondering how adults did not get side aches while riding. This thought process often transpired while horseback, holding my side with one hand while trotting across miles, and I do mean that literally, of prairie to gather some bunch of cows.

One of my more memorable experiences with this occurred while riding with my grandpa one day on his ranch in the Black Hills of northeastern Wyoming. I was around that three or four year old mark, and we were headed “up on top.” To get “up on top,” we took a well-known trail behind the barn that to my young eyes went on forever at an almost impossible upward angle. Riding a rough, tough little pony didn’t do much to improve my confidence.

A side ache set in almost immediately as we jogged along the trail worn by cattle and people who had made the same journey countless times before us, dodging pine trees and sandstone rocks. Every once in a while my grandpa would look back and ask how I was doing. I was his oldest grandchild, and expected to help out. While a kind, wonderful grandpa, I knew that no sympathy would come from stating I was certainly near death from my side ache. So, I would simply respond, “I’m fine,” and we would continue onward.

We did, of course, eventually make it to the top, where I had a few precious moments to gasp for breathe as he got off to get the gate. The day improved from there, and while I can’t remember what else we did, I can still see my grandpa’s face, clear as day, as he looked over his shoulder at me. I imagine that look was a combination of genuine concern and a humor over his little helper’s side ache in the twinkle of his eye, mixed the necessary grand-parenting tone that knew the valuable lessons being taught by not stopping every time I was uncomfortable for some reason. 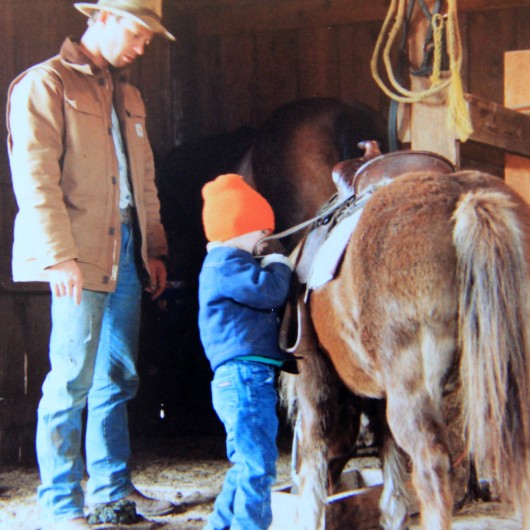 One day I was telling my dad about this experience, while we headed up the same hill to gather cattle a few years after my grandpa passed away. He chuckled and said as a kid he had always wondered how his dad didn’t get side aches too – that it was fascinating to him how he could not be in the same pain he was experiencing after trotting “all day long it seemed like.” He also noted that his father would look at him and ask how we was doing in same tone he had me, a combination of concern, humor, and a touch of toughen up.

Now that I can scale that hill riding a full size horse and without experiencing side splitting pain for most of the trip, it holds a certain nostalgia for me as the scene in which one of my most vivid memories of my grandpa took place. I actually look forward to the rare occasion I get to head out for a day’s work horseback in that direction anymore, and cherish the memories of working together with a man I never knew as an adult, but admire nonetheless.