Her name was Sage. A 30 pound dynamo of Australian Shepherd/Border Collie/Kelpie origins, she was a bob tailed, gray murl demon. She was a useful stock dog, nice companion and entertaining in a way I’d never encountered in a stock dog. She was over 30 years ahead of her time in her favorite trick, but dogs and owners have caught on since then and made a sport of it. It’s called “Dock Diving”. But she took it to an extreme. 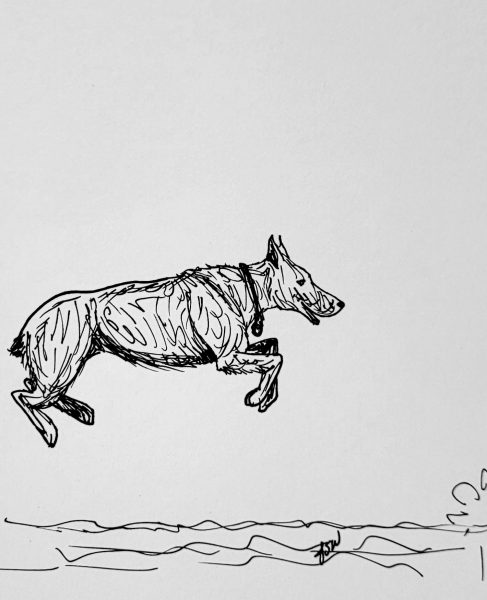 Sage never had a dock, as she was a ranch dog, but she loved to dive off the bank of a dam after anything that could be thrown. Generally that was clods or a rock. She really liked to dive. In the deep pit dams in that sandy country, the water would be pretty clear and if I threw a rock in the deep side, I could watch as she’d dive in and go to the bottom and retrieve it. She’d do it over and over, looking like a seal underwater. It was fun to watch and, needless to say, my saddle horse would get a nice break while I threw rocks for her.
When we moved cattle, she was always along to help. She discovered one time that if she came up from her dive amidst the drinking cattle that they would have an epic reaction to her sudden appearance. Thereafter, she would always stay under until she could come up and cause that reaction. It was like seeing swimmers discovering a big shark fin and the panic to leave the water! She could swim underwater for an amazing distance, little bubbles trailing from her nose, until she could propel herself to the surface at just the right spot.
The poor cows got leary of drinking if she was along. I can’t blame them. I didn’t throw anything she could dive for if the calves were small, but it was every bovine for itself when they were up there in the 600 lb range. Entertainment is entertainment, and no cows were ever injured in the melee to leave the water. By year two of her diving act, they would approach the water like a zebra approaching a crocodile infested river in Africa. Lips stretched out to reach the water, eyes fixed on the surface, hoping to see the canine projectile before she broke the surface, they’d cautiously sip the water. It’s not like she ever bit them, as she always had the rock in her mouth that she’d retrieved. But, she had bit them when out of the water, so they were sure she would in the water.
So, Sage was definitely ahead of her time and was maybe the first diving dog. She’s sure the first and only one I ever had!